Baywood Ale House: Where the craft beer is cold and most people know your name

If your iPhone buzzes and Baywood Ale House Owner Chad Carroll is on the other line, congrats.

Chances are, he’s about to tell you he’s got a numbered mug with your name all over it, and the long wait is over.

“I did a happy dance when I got the call,” said Baywood resident Bill Martin, who prefers to go by his mug number, “17.” His friend and drinking buddy, “Los Osos Larry,” is proud number 37. For the record, Martin’s “happy dance” draws heavily on the music video for The Bangles’ “Walk like an Egyptian.” 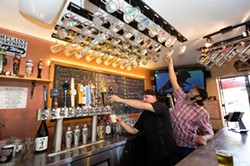 Each mug tells volumes about its owner. Some are emblazoned with surf stickers, while others are wrapped with gaudy leopard print tape and sly slogans.

The clutch of 100 gleaming glasses currently hanging above Baywood Ale House’s laid-back bar are reserved for patrons who come in consistently, and Carroll uses ping-pong balls, each representing the span of a week, to delineate just how often these folks belly up to the bar (get three ping-pong balls and you might just lose your spot).

The watering hole relocated from Cayucos in March, yet already boasts a 300-person wait list for this simple loyalty mug program.

I have a theory. It’s not just the 365-day-a-year happy hour discount. It’s the sense that, when you’re here, you’re family. In essence, it’s a place where everyone knows your name.

“We’re like the Cheers of Baywood,” Bar Manager Christopher Mayes said with a laugh. “When you come in here, you end up having a connection with somebody. No matter who you are, what stage of life you’re in, if you come in and have a pint, you will strike up a conversation.”

Much of that chatter surrounds the beer.

“We constantly rotate our 16 taps, and you’ll always find a beer of each variety, whether it be a stout, pale, lager—the full spectrum,” Carroll said. “However, you’re going to see different brewers each time. We love to expose people to something different.”

The evolving beer selection spans from local faves like Figueroa Mountain, Central Coast Brewing Co., and Tap It to craft brews from across the nation. If you’re looking for something different, this is your new hangout.

Another point for Baywood Ale House: It is not a dark, dingy “pub” by any stretch of the imagination. The sophisticated menu—boasting zero fried foods, lots of organic meats, and fresh, farmers’ market produce—make it worth a dinner trip alone. On weekend evenings, the dog-friendly patio is buzzing with chatter and wagging tails. 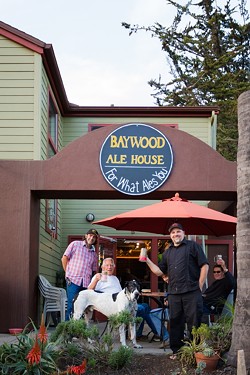 Before Carroll, originally from L.A., and Mayes, originally from Seattle, ditched their careers as contractors, they homebrewed. Safe to say the guys have been drinking and dreaming together for more than 20 years.

Believe me, when you get these two going on a story, it’s easy to see just how well-worn their friendship is. The way they met is utterly perfect.

“Chad was my bartender,” Mayes said. “We both ended up on Mount Hood, Ore., as snowboard bums. But even there, we had our own microbrewery, Mount Hood Brewing Company.”

Just an hour from downtown Portland, the guys, along with Carroll’s future wife and business partner, Christie, knew nothing but great beer.

“The craft beer craze was already huge,” Carroll said, adding that many adventures started with a hitchhike from the Timberland Lodge (of The Shining fame) into town.

Not much has changed with the trio, save for the lack of snow and hitchhiking. Hanging out day-to-day just a stone’s throw away from Baywood’s blue waters ain’t a bad gig. Christie also operates her own pet treat company, Maddie May’s Pet Pantry, in Cambria.

And although the ale house’s former location in Cayucos was scenic, it just wasn’t “right.” When the business made the move in January to Baywood—an area with 10 times the population, things started clicking.

“[The Baywood area] has a real population of 15,000 people, and it seems to be a population very savvy to craft beer,” Carrol said. “Eighty percent of our customers are local people.”

Yes, you will have to fight through the locals to get a spot at the bar, but it’s worth it. Baywood folks are friendly, and at Baywood Ale House, you’re always bound to encounter something new (did I mention you can also gulp on soju cocktails, hard root beer, awesome local wine, and unique sodas?).

“The fact that we always have something different on tap is always going to bring our customers back,” Mayer said. “We have people that are here every single day. People love coming here because the minute they walk in, we’re happy to see them and they’re happy to see us. We pour ’em a mug, and they always walk away smiling.”