Baywood Climate Fest on Nov. 29 offers a day of activities and education aimed at increasing awareness of global warming

Feel like taking part in SLO County’s biggest ever flotilla?

On Nov. 29, rent a paddleboard and join the Baywood Climate Fest, an all-day event hosted by Baywood locals to inspire positive action on climate change. 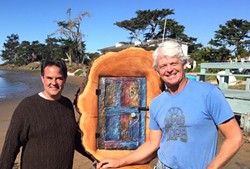 At 11 a.m., 350 vessels in Morro Bay will come together to form a giant peace symbol, which will be aerially photographed by a drone flying overhead and shared with international nonprofits Avaaz.org and 350.org.

“It’s going to be a historic thing,” said Paul Irving, a Baywood resident and one of the event’s organizers. “There’s probably been 200 boats in that bay, but never as many as 350.”

The target of 350 isn’t set arbitrarily. It’s a significant number in climate science, marking the target level of carbon dioxide in the earth’s atmosphere, in parts per million, for us to reduce to.

Baywood joins communities from all around the world over the weekend demanding meaningful action on climate change in anticipation of the United Nations Climate Change Conference in Paris, France, which runs from Nov. 30 to Dec. 11.

“[The Baywood Climate Fest] sends a peaceful message of care and concern to our global leaders heading into the climate change summit in Paris,” the event’s Facebook page reads. “Through music, the arts, and positive messages, let us show the world that the Central Coast cares!”

The remainder of the Baywood Climate Fest takes place at the Back Bay Inn, in its event garden, from 12 to 4 p.m. Locally made, environmentally themed art will be on display while high school and Cal Poly students, EcoSlo, and Surfrider present informational exhibits on global warming.

Irving told New Times that it was important for the Baywood Climate Fest to involve all age groups, especially young people.

“It’s the kids who will inherent the problem of climate change,” Irving said. “It’s important to involve them and bring the issue to their consciousness.”

At 12 p.m., a consortium of international speakers will share how global warming is impacting different areas of the world where they hail from. That will be followed by a poetry reading courtesy of Dian Sousa and Lisa Coffman.

The afternoon crescendos into a music festival featuring local musicians the Cayucos Players—a middle school combo—Mama Tumba, and the Zongo All-Stars. The concert is produced by Big Big SLO and Good Medicine Presents.

Food and drinks will be available thanks to the Back Bay Inn and BarrelHouse Brewing Company.

Baywood Climate Fest will close with a march through the streets of Baywood led by a marching band, ending at the pier for one last aerial photo as the sun sets.

Ted Emrick, a local artist, dreamt up the idea of a climate change march in Baywood about a month ago. Emrick told New Times that since he proposed the event to co-organizers Paul and Jessica Irving and Eileen Vavra, ideas have flowed effortlessly. The event has inspired lots of enthusiasm within the community. At least 1,000 people from all over the county are expected to attend.

Admission is free, and all are welcome.

“Since the moment we pushed the button on this, it’s been a flood of interest and support,” Emrick said. “It’s so much larger than us. It’s been really inspiring for us.”

One Cool Earth is introducing its composting program at Virginia Peterson and Kermit King elementary schools in Paso Robles. Students in the program will learn how to work together to compost and practice sustainable living skills.