Be seduced in Shell Beach

It may be a chilly time of year, but never fear—there’s a hot new event to warm you up. It’s the first-ever Shell Beach Winter Solstice Music and Art Festival, celebrating the return of the light with five bands and some awesome art.

The compulsively danceable Blue Turtle Seduction headlines the celebration, which also features the musical grooves of Miznoma, Tropo, Fish Out of Water, and the Wadsworth Bluff Rats.

“I think of it as a Grateful Dead-ish day,  with musically talented bands, light rock, nice and mellow—not head-banging,” explains Daniel Chapman, who’s putting on the festival along with Cristi Rivera of the Honeymoon Café. 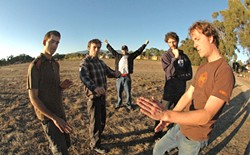 The celebration had its genesis when members of South Lake Tahoe-based Blue Turtle Seduction called their friend Chapman and told him they’d be coming through town and wanted to play. Chapman and Rivera decided to make a day, and night, of it, and invited more bands and some great local artists to join the fun.

“We live in this great, great area, but there aren’t enough of these events in winter. It’s not a Christmas gathering, it’s a holiday gathering, with everyone feeling warmness inside,” Chapman notes.

Blue Turtle Seduction is known for their “international rump-shaking music,” as their website describes it. With a big fan base resulting from their relentless touring everywhere west of the Rockies, Blue Turtle Seduction delivers a funky groove, world melody breakdowns, and danceable jamming described as featuring a neo-hip beat. Listen up for some tunes from their upcoming album, 13 Floors, due for release in February.

Also heating up the dance floor at La Perla del Mar in Shell Beach will be Miznoma, a Santa Cruz-based band known for its funk-infused California rock ‘n’ roll. Lead singer Sam Fischer defines it as “a Tom Petty meets the Eagles kind of thing, a sort of easy livin’ oceany, sunny day kind of vibe.” What could be more perfect for Shell Beach?

The Shell Beach Winter Solstice Music and Art Festival starts around 2:30 p.m. on Friday, December 19 with art displays by Forever Stoked, Chris Burkard, and Eric Soderquist, both indoors and on the lawn at La Perla del Mar. The Wadsworth Bluff Rats, a group of young local surfers, fires up at around 3 p.m., with Fish Out of Water starting around 4:30 p.m. Tropo takes over the stage at 6 p.m., Miznoma at 7:30 p.m., and Blue Turtle Seduction at 9 p.m.

“It’s more of an art show in the day, and a dance concert at night. This will be the first of many if it’s successful. We’re already planning another great Friday afternoon in six weeks or so,” he says.

Food from the Honeymoon Café, including a taco bar, will be available, along with beer, wine, and SLO Chai. Advance tickets are $12, available at Honeymoon Café, Moondoggie’s in Pismo Beach, and Hole in the Sky, and $15 at the door. It’s an all-ages event, with ID required at the door. La Perla del Mar is located at 205 Windward Ave. in Shell Beach, down the street from Alex BBQ. Parking is a block south, on Pearl. Call 709-4312 if you need more info.

“It’ll be well worth it for the music. It’s a chance to see and hear all this great local talent,” Chapman concludes.

Celebrating the release of his new Americana-folk-bluegrass recording, O Hear the Rattling, Adam Pasion is back in SLO after an acoustic tour of California, Nevada, and Washington. Local fans remember his band as Briertone, but now we have the chance to hear his ensemble perform under his own name—after six years, Briertone was put to rest once the new album was finally completed.

“Our purpose is to bless and encourage listeners, to speak love and truth into lives through music,” he tells visitors to his new website, adampasion.com.

Rounding out the lineup for a special acoustic Christmas show at Linnaea’s Café in downtown SLO (1110 Garden St.) is The Loveless Estate, a Central Coast act that’s been playing at hot spots around the state for five years.

Donny Kidd plays guitar and sings lead vocals, while Christopher Day joins him on guitar and backing vocals. The two have been hard at work on their newest recording, Electric Candlelight, due out early next year. That’ll kick off a national tour, where even more music lovers will no doubt join their ever-growing fan base.

Check out their music at myspace.com/thelovelessestate, and hear The Loveless Estate live on Friday, December 19. Also performing at the show are Cambria locals This, plus RakeImpatient.

A tribute to tributes

Billed as “the ultimate Johnny Cash tribute,” Cash’d Out promises to make the season sweet for fans of the Man in Black. These guys started in San Diego in 2004 when Douglas Benson met Kevin Manuel through an ad in the local alternative paper. Stand-up bass player Sean Glithero joined up a short time later, and Cash’d Out was ready to ride. They pride themselves on being as authentic as it gets. Their clothes, vocals, and instruments keep the memories alive, and Johnny Cash fans throughout the Southwest have flocked to their shows.

Cash’d Out takes the stage at Downtown Brew in SLO on Friday, December 19. Tickets for this 18-and-older show are $10, available at Boo Boo’s, Downtown Brew, and Ticketweb.

And now, folks, for a wildly different tribute band—Black Fag. What is that, you ask? Just what their name implies: a wild, gay tribute to staple punk band Black Flag. And in the wake of Proposition 8, what could be better than a gay band paying tribute to notoriously pissed off and angry political punks?

Black Fag’s self-described story began in the small town of New Hope in Pennsylvania, where Liberace Morris found a home in the thriving gay community. After a heartbreak in his relationship, he drowned his sorrows at the local watering hole, where he started singing and playing Black Flag’s “Nervous Breakdown” on the piano. Folks ate it up, but once he started hurling martini glasses around the place, he was ejected.

While he was laying on the sidewalk, a shadow loomed over him. It was bassist Cher Dykeowski, a biker dyke in town for the annual motorcycle rally. She too was a Black Flag fan, and offered Liberace the back seat on her Harley. They headed off to the West, where they met Greg Streisand—who had been dishonorably discharged from the military for violating their “don’t ask, don’t tell” policy—and Robo Simmons, a cruise ship entertainment director.

All shared a love of Black Flag’s music, and Black Fag was born.

Is there any better way to enjoy the holiday season than dancing to the rhythms of reggae? Here’s your chance: Green Machine is coming!

Their music synthesizes psychedelic reggae and hypnotic rhythms, drawing on elements of free jazz and dub style. Green Machine’s message is one of progressiveness and liberation, delivered with solid drum and bass, skanking guitar, synth, and keyboards, along with Rasta chants and Earth Mother lyrics, according to their publicity.

Green Machine musicians are Tina Simmons Avila on bass and vocals; Christopher Avila on guitar, synth, and keyboards; Andy Bucher on drums and percussion; Ras Horace Montgomery on melodica, percussion, and vocals, and Clark Vitali on synth and keyboards.

Their third and latest CD is Here They Come, on Earth Juice, described as “devotional, romantic, and adventurous.”

Saddle up and ride to San Miguel

Sheila ran a similar joint in Nashville, and when Marty came off tour, the couple decided to set up shop in the North County with their three kids, since Marty’s a native of Paso Robles.

“I love making people happy, and having a good time,” says Sheila. And in their first few weeks of business, the locals are already flocking in. The regular Wednesday night comedy shows are popular too—just five bucks when you have dinner at the steakhouse too, or $10 without.

She’s been busy booking big-name country headliners for monthly shows starting in mid-January, with Nashville folks calling to book their date. Meanwhile on Friday and Saturday—including this Friday and Saturday, December 20 and 21—you can click your boots to the honky tonk sounds of Marty René and the Regulators.

Sunday nights you’ll find an open jam, and on New Year’s Eve, there’ll be live music, with a ’70s and ’80s theme, including a costume contest. The $5 ticket price includes champagne at midnight.

The dance floor is as big as the wide open range, the stage stretches on forever, and the place holds 750 people. Check it out at 1285 Mission St. in downtown San Miguel (467-5047, or liveattheranch.com). Yeehaw!

Best known as the energetic pipe player for Molly’s Revenge, David Brewer is coming to the Central Coast in support of his new solo album Turning Pages. Get a listen to this one—the album features tunes resurrected from rare 18th-century Scottish manuscripts with new and very listenable arrangements. Added to that are reels with intricately interwoven pipes and fiddle, combined with rich grooves of guitar and bouzouki. 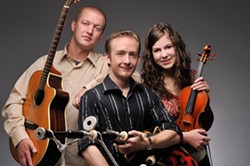 Brewer made a name for himself playing a regular gig at a hopping Irish pub in Santa Cruz. When his bagpipes were stolen from the pub, the community came together and raised enough money to not only replace the stolen pipes, but also to send Brewer to Scotland to study with master teachers.

Tickets for this performance are $15, available at Boo Boo Records in SLO, Cambria Business Center at 1241 Knollwood Drive, or by calling 927-8330. If there are any seats left on the night of the show, tickets will be available at the door.

That popular SLO live music venue Downtown Brew is doing it again—this time with a special Holiday Showcase featuring some great local musicians. How’s this for a fine Christmas present to music fans: Still Time, Joe Koenig, Derek Senn of Wedding Industrial Complex, Vance and Pat of Resination, Lucas Ohio-Pattie of The Shamblers, and Donna Lu of Romeo and the Juliets. There’s no set list for this unique show on Saturday, December 20 at 8 p.m., just music flowing from artist to artist, as they play holiday songs together and separately. Tickets for this 21-and-older show are just five bucks at the door. 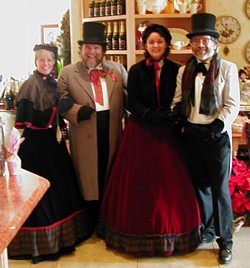 Few sounds are more beautiful than the human voice, especially when you’re hearing more than a hundred singers raising their voices together. That’s the idea of the Cuesta Master Chorale, whose motto is “breathing life into the music of the masters.” They’ll be presenting carols from around the world at their Holiday Festival concert on Saturday, December 20 at 8 p.m. at the Christopher Cohan Center at the Performing Arts Center. The performance features Ottorino Respighi’s enchanting “Laud to the Nativity.” Dr. Thomas Davies—who’s also a music professor at Cal Poly—is the conductor, a post he’s held since 1985. Featured soloists are Mary Sue Gee, Karen Holder, and Paul Osborne. Children’s tickets for the performance are just $5 with the purchase of an adult ticket ($15, $20, and $23, plus a $3 facility fee), available at the PAC box office, 756-2787.

The beauty of the human voice—without musical accompaniment—will surround you at a special benefit on Tuesday, December 23 at 7 p.m. in San Luis Obispo’s Old Mission. The Uncommone Carolers dish up a scintillating mix of traditional and contemporary a capella music at their “Christmas in the Mission” concert, a benefit for the Family Care Network. Tickets are $10 for general admission, $15 for reserved seating, available at the SLO Chamber of Commerce, or by calling 543-1551. You can also buy your ticket at the door. Celebrate the season!

Contributor Kathy Johnston thinks dancing is the perfect way to keep warm. Heat her up at kjohnston@newtimesslo.com.