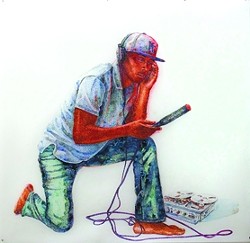 “You’ve never seen Contempt?” Michael Barton Miller asks, scandalized. He pulls his eyes away from his sketchbooks to regard me through red-framed glasses. The Jean-Luc Godard film—starring Brigitte Bardot in a dark wig and shot in delirious Technicolor—is one of several to leave a mark on the Los Osos artist’s current show, “Super 8mm.” On the open page before him is a sketch of Bardot with a ’60s-style bouffant, the draft of a larger piece that will soon grace the walls of the Cuesta College Art Gallery.

But I have to disappoint him. I have never seen Contempt.

Godard isn’t the only filmmaker to make an impression on Miller’s paintings, done with watercolors on architectural velum. Russian director Andrei Tarkovsky’s The Mirror and the work of Polish director Krzysztof Kieslowski show up in his artwork. So does Woody Allen, and a still from a silent film which reads, “You have a nice speaking voice.”

The latter is a nod to another topic resonating throughout “Super 8mm”: sound, and our various means of capturing it. The body of work began with Listeninglass, a painting of a girl with a glass to her ear, pressing it up against the space between the painting and the viewer. From there, Miller explored other methods to capture sound. His penchant for extinct technology (two-speed tape recorders, slide projectors) soon crossed his canvas, and with it, Super 8 mm film, a format now largely replaced by video.

The themes in Miller’s latest show are as layered as his paintings, built from careful application of watercolors to vellum (a tricky, non-porous surface), a blow-dry, and a repeat. The medium requires a certain relinquishing of control. The watercolors, Miller says, “refuse to repent.” The way he describes it, the paintings often slip around when their creator is away, looking very differently upon his return. Or maybe it’s his eyes playing tricks on him. Or both.

Miller’s interest in analog communication led him to works like Dream Letters, in which a woman dozes, surrounded by fluttering letters. (“It’s like, who writes a letter anymore? There’s something that’s dead.”) There’s a red cup stain on her bed, into which a few red stitches have been sewn. A needle dangles from the stain on a thread, piercing one of the letters, which hangs, trapped, between the bed and the floor. There’s a story behind this one, one Miller is hesitant to give away. He’ll only admit that his painting, like the literature he enjoys, is crawling with metaphors.

In another painting, a dude in a college sweater holds a can on a string to his ear, straining to hear. The other end of the string can be found in another painting: a stack of art books suspended above the dude’s head.

“That’s what they do to you in grad school,” Miller explains: They dangle a bunch of heavy books over your head and give you a can on a string to decipher them.

Miller, a Los Angeles transplant, has shown his art in such exotic locales as Thailand, Vietnam, and Costa Rica. And you can see the influence of these places on his latest body of work.

Colorful Thai butterflies flit through one of his paintings, their delicate bodies surrounded by what appears to be a grid. “They understand space better than we do,” Miller explains. He recounts a failed attempt to nab one with his hat. Out of a cloud of 100, all remained frustratingly just out of reach.

Miller’s paintings are often composed of tiny dots, and many viewers make an immediate comparison to pointillism. But he views the specks more as pixels. Sometimes, too, the dots give way to that watery, vague style expected of watercolors, a medium generally relegated to plein air artists and children. Miller, a professional with an affinity for amateurish things, enjoys toying with watercolor stereotypes.

Frozen Falls, arguably the most watery watercolor painting of the show, depicts a frozen-over Niagara Falls, with distant people crossing over it. Niagara Falls, explains the artist, was where he first understood death. He recalls his father taking him to the falls when he was a child. He describes the feeling of awe, the angry roar of the water, the desire to run away, and the compulsion to leap over the edge canceling one another out, so that he merely stood transfixed at the edge of the abyss.

His father pointed to some posted photos of people who had died in the falls: “My dad goes, ‘That guy’s dead now,’” Miller says. “It was my first time ever thinking about how life ends.”

Film and photography would continue to shape his ideas about existence, and the expiration and subsequent replacement of filmmaking technology was a natural leap. But more than a show about film, “Super 8mm” contains the story, told in disjointed, nonlinear fashion, of Miller himself: Find his initials. Spot his age this year (62) cleverly concealed in the title.

Of course, Miller concedes jokingly, “I don’t know how ‘super’ I am.” And no one can be truly super, just as no one’s invincible, though someone’s likeness may be replicated on celluloid, his or her voice contained by a two-speed tape recorder.

Still, a part of us yearns to turn the eight on its side and so go on forever.