I spent many an hour alone in my room reveling in the sounds of the Beach Boys double compilation album Endless Summer (1974), which was mainly comprised of their early Capital Records, pre-Pet Sounds music. The track list is nothing short of incredible: “Surfin’ Safari,” “Surfer Girl,” “Catch a Wave,” “The Warmth of the Sun,” “Surfin’ U.S.A.,” “Be True to Your School,” “Little Deuce Coupe,” “In My Room,” “Shut Down,” “Fun, Fun, Fun,” “I Get Around,” “The Girls on the Beach,” “Wendy,” “Let Him Run Wild,” “Don’t Worry Baby,” “California Girls,” “Girl; Don’t Tell Me,” “Help Me, Rhonda,” “You’re So Good to Me,” “All Summer Long.”

Just writing the names of the songs send those iconic tracks spinning through my head. They were truly the soundtracks of my youth, and it seems that double album manages to capture all the feelings of adolescence. 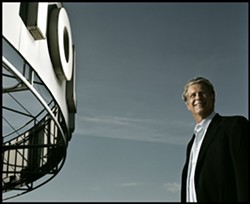 As I got older and more mature, so did the Beach Boys with Brian Wilson at the helm. Of course, anyone with a passing interest in The Beach Boys doesn’t need me to tell them about Brian Wilson’s bouts of mental illness and drug use, the drowning death of Dennis Wilson, the fallout among the band members, and the legal battles for control of The Beach Boys empire.

To say the least, Wilson has been an enigmatic figure in pop music, moving in and out of the spotlight over the years. In 2008, Rolling Stone ranked him 52 in its list of “100 Greatest Singers of All Time.” In 2012, music publication NME ranked him No. 8 in its list of “50 Greatest Producers Ever.”

According to organizers, “Wilson will perform hits from his latest and upcoming albums at Sunset in the Vineyard at Vina Robles. Former Beach Boys bandmate Al Jardine will perform with the legendary composer, arranger, and producer during the concert, singing some of the Beach Boys greatest hits such as ‘Sloop John B’ and the No. 1 smash in 1965 ‘Help Me, Rhonda.’”

It’s hard to fully know what to expect at a Brian Wilson concert, but he’s a legend, an unrivaled talent, and a musical genius. Some times crazy and creative live right next door to each other.

“The group will perform songs from their extensive catalogue, as well as new material from each member,” say organizers, and like The Beach Boys, that catalogue runs deep: “Southern Cross,” “Woodstock,” “Suite: Judy Blue Eyes,” “Our House,” “Country Girl,” “Carry On,” “Ohio,” “Teach Your Children,” “Marrakesh Express,” “Carried Away,” and so much more! You rarely hear vocal harmonies as good. 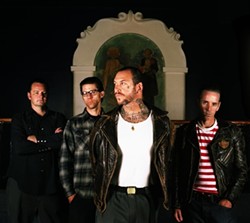 Old-school punks Social D made their bones with tracks such as “Another State of Mind,” “Prison Bound,” “Story of My Life,” “Ball and Chain,” the Johnny Cash cover “Ring of Fire,” and “I Was Wrong.”

The Whigs are a garage punk trio out of Georgia, Jonny “2 Bags” Wickersham is a punker out of Costa Mesa, and Jade Jackson is a chanteuse hailing from Santa Margarita who’s been out of the area attending art school. Should be quite a day. 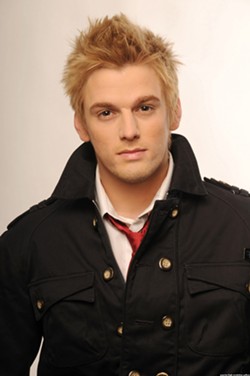 It’s another one of those relentlessly busy weeks for SLO Brew, with shows every day this week except Monday. They kick off their week with pop sensation Aaron Carter on Thursday, Sept. 25 (7:30 p.m.; all ages; $17 presale or $20 at the door). By age 10, Carter was an international pop sensation and went on to record several hit singles (“I Want Candy,” “Aaron’s Party,” “That’s How I Beat Shaq,” “Oh Aaron,” and “I’m All About You”) and multi-platinum albums as well as appear in film, television, and on Broadway.

This Friday, Sept. 26, multi-New Times Music Awards winner Proxíma Parada plays (7:30 p.m.; all ages; $10 presale or $15 at the door) with Marty O’Reilly & The Old Soul Orchestra opening. “Raised on music from Bill Withers to the Band, the four young men of Próxima Parada perform captivating, dangerously genuine music, felt as much as it is heard,” according to the band’s bio. “Listeners have called their music ‘sexy as hell,’ so either bring a loved one or keep your eyes and hearts open because Próxima Parada will be playing match-maker.”

On Sunday, Sept. 28, the Brew hosts The Lone Bellow (7 p.m.; all ages; $15 presale or $18 at the door), featuring Zach Williams, lead singer and principal songwriter. “Though the lyrics have a melancholic undercurrent, the tracks are more often rave-ups than ruminations, with swelling three-part harmonies and rousing group-sung choruses, especially on the electric guitar-driven ‘The One You Should’ve Let Go’ and ‘Green Eyes and A Heart of Gold,’” according to their press materials.

Come Tuesday, Sept. 30, it’s reggae time when Through the Roots plays with openers The Supervillians, The Steppas, and Deweay and The Peoples (7:30 p.m.; all ages; $11 presale or $13 at the door).

And finally, on Wednesday, Oct. 1, Jumpsuit Records presents Pushing Through The Pavement: A Permaculture Action Tour featuring The Polish Ambassador (7:30 p.m.; 18-and –older; $17 presale or $20 at the door), with Luminus, Mr. Lif, Ayla Nereo, and Wildlight. This promises to be a night of wildly divergent and eclectic music.

This Christopher Cohen Center of the SLO Performing Arts Center has three great musical events this week starting on Friday, Sept. 26 (7 p.m.) with Schoolhouse Rock Live! Bring the kids (suitable for ages 5 and up) or just relive your youth when the popular Saturday morning cartoon series that taught grammar, math, and more comes live to the stage. Expect familiar hits such as “Conjunction Junction,” “Just a Bill,” “Interplanet Janet,” and “Three is a Magic Number.” Visit pacslo.org or call 756-4849 for tickets to this and the following two shows).

One of my all-time favorite songs is Gordon Lightfoot’s “The Wreck of the Edmund Fitzgerald,” and now Lightfoot plays the PAC on Tuesday, Sept. 30 (8 p.m.). He’s got so many great songs: “Don Quixote,” “Ode to Big Blue,” “Beautiful,” “Carefree Highway,” and “Sundown” among many more.

On Wednesday, Oct. 1, Led Zeppelin fans should head to the Christopher Cohen Center for Get the Led Out, a tribute to Zep (7:30 p.m.; 756-4849). “From the bombastic and epic, to the folky and mystical, GTLO captures the true essence of Led Zeppelin’s studio sounds in all its depth and glory,” according to press materials. “Celebrate the British supergroup’s mythic career in a spectacular big concert setting with an awe-inspiring live performance, filled with the songs that shaped a generation.” Warning! This is a high volume performance! 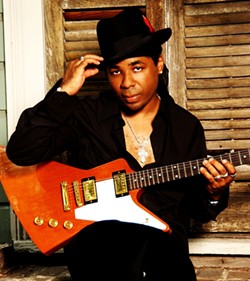 Camille Bloom brings her percussive guitar and “purr and wail” vocals to at Last Stage West in Atascadero this Thursday, Sept. 25. Her newest EP is Big Dreams.

The Bay Area’s Great Spirit returns to town for a show at Frog and Peach this Thursday, Sept 25, performing a unique combination of folk, bluegrass, and funk.

The Henry Miller Library presents An Evening with Philip Glass and Friends this Friday, Sept. 26, featuring the legendary American composer Philip Glass, who will be joined by Tim Fain and Matt Haimovitz, plus Jaron Lanier (rare instruments) and Jonathan Rose (bass), for an evening of music and poetry (doors at 7 p.m.; $65; henrymiller.org).

Truth About Seafood plays Old Cayucos Tavern this Friday, Sept. 26 (9 p.m.). “It’s only been about 10 years since we’ve played there,” said band member Brad Daane. “I’ve heard the place has mellowed a bit.” I hope not! Rock on, OCT!

The SLO Blues Society hosts multi-Grammy Award winner Chris Thomas King this Saturday, Sept. 27, at the SLO Vets Hall (8 p.m.; 21-and-older; $25 at the door). “Born in Baton Rouge, King is the son of bluesman and club owner Tabby Thomas,” according to press materials. “Although raised in the blues, the teenage Chris was strongly influenced by rock (especially Jimi Hendrix), soul, and early rap music. A tour of Europe with his father, and the receptive blues audiences encountered there, encouraged him to focus on the blues. His early recordings featured straightforward electric and acoustic blues, but by the mid-1990s, he had created a fusion of blues and hip-hop which led to the 1995 recording of 21st Century Blues…From da ‘Hood followed by Dirty South Hip-hop Blues in 2002.” Catalina Eddy and the Blues Keys will open the show.

Amy Obenski returns to SLO to play Luna Red this Sunday, Sept. 28, at 3 p.m. “This should be a super fun and chill event,” Amy said. “I just released a brand new album (my fifth).” Amy’s got a really gorgeous voice and she’s a great songwriter! Worth a check!