It's unclear how many bears are in SLO County 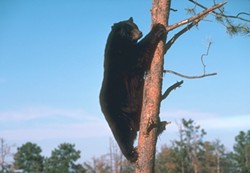 As state officials prepare to make a decision this month on whether to allow hunting of SLO County’s black bears, criticism of the science behind the proposal is mounting.

Although no local meetings on the issue are scheduled, comments from SLO County residents will be accepted before the California Fish and Game Commission considers the plan at their meetings in Lodi on April 9 and again by teleconference on April 21.

Opponents say the state Department of Fish and Game has no data on the total number of the shy, secretive bears in the county.

Studies using smelly cans of mackerel as bait have shown where bears live locally, but give no indication of how many there are, critics say. Local research based on DNA, scat, or radio collars has not been carried out.

A recent Fish and Game study shows much of SLO County is suitable habitat for black bears, but does not include information about their population. The hunting proposal stems from requests by hunters.

Fish and Game wildlife biologist Bob Stafford said SLO County’s bear population probably numbers “a few hundred animals at least,” a figure he said is extrapolated from the amount of suitable local habitat and studies from other parts of the country.

“From the numbers out there and the habitat, from a biological aspect I’m not concerned. I don’t think many will be taken. Los Angeles, San Bernardino, Ventura, and Santa Barbara counties all have a [bear hunting] season, and there’s no impact on populations there,” Stafford added.

Under the proposed hunting regulation, the local bear season would begin in summer each year and continue until the end of December. Each hunter would be allowed to kill one bear a season, using nonlead bullets or bow-and-arrow to shoot bears, usually chased up a tree by dogs. Bear cubs weighing 51 pounds or more would be fair game, but cubs of 50 pounds or less, and their mothers, would be off-limits.

Hunters “travel hundreds of miles” from home for the opportunity to shoot bears, according to an environmental report prepared by the department.

Fish and Game estimates that 20 to 50 local bears would be legally killed by hunters on public and private land in SLO County each year, plus another 25 percent taken illegally. This “will remove less than 10 percent of the population annually,” the Negative Declaration states. But if more than 20 percent of the bear population is killed by hunting or other causes, that could “result in population declines,” the report says.

Its conclusion that “a harvestable surplus exists” is based on studies done elsewhere.

“We have no idea how they came up with the estimate of 20 to 50 bears killed by hunting every year, or what percent of San Luis Obispo County’s bear population that is,” said Kuyper. “There’s no baseline data to indicate whether this is a sustainable level or not.

“Everyone can agree, if hunting is appropriate, it needs to be based on the best data possible. We don’t know if Fish and Game has collected any valid scientific data.”

Los Padres ForestWatch on March 31 asked Fish and Game to withdraw its hunting proposal until the public has access to studies and documents used to support it. Group leaders say they’ve requested the supporting data but have so far been thwarted.

“It’s important for people to write in and let the Fish and Game Commission know that the people of San Luis Obispo County have serious concerns with the bear hunting proposal, whether scientific, ethical, or enforcement-related.”

Contributor Kathy Johnston may be reached at kjohnston@newtimesslo.com.