Bears walk among us

A smelly can of mackerel hanging from a tree makes an irresistible lunch stop if you happen to be a black bear wandering in the wild hinterlands of San Luis Obispo County. That's what a group of Cal Poly biology students discovered this past summer, as part of a research project to determine if the local bear population has increased enough to justify hunting here.

That same brand of canned mackerel also was featured in the only other study of local bears, carried out in 1994. But in this year's update, even more of the odiferous bait stations showed signs--such as claw marks--of being visited by bears, leading researchers to conclude that their numbers are increasing.

The state Department of Fish and Game is gathering information 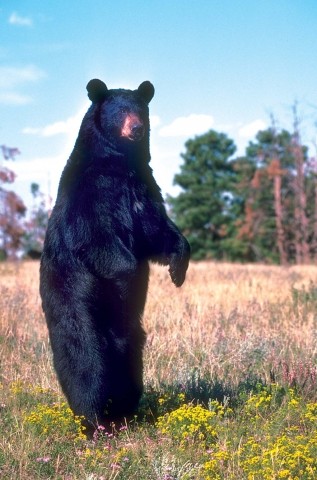 # about SLO County's black bears, after receiving a public request to open a bear hunting season here, according to the department's local wildlife biologist, Bob Stafford.

Biologists are in the middle of a habitat assessment study, looking at how much of SLO County's landscape is a suitable place for bears to live. That information will be used to extrapolate the overall population of bears in the county before a decision is made about whether to allow hunting or not.

Most county residents have never seen a black bear here--in spite of the beasts' growing numbers. As the furry creatures fatten up before their winter nap, it's a good time for local human inhabitants to learn more about our bear neighbors.

They may look something like a cute, cuddly teddy bear you'd find under the Christmas tree, but the wild black bears of San Luis Obispo County are a whole different animal.

For one thing, they're highly intelligent. They're also adept at solving problems, especially when it comes to obtaining tasty tidbits. And they're big and strong. Rather than attack a human, however, they'd much rather turn and run away or climb up a tree--and even though they can outrun and outclimb humans, Department of Fish and Game officials have no records of a black bear killing someone in California.

Encountering one of these shy, secretive creatures in the wild backcountry of SLO County is a rare and unforgettable experience. San Luis Obispo's natural resources manager Neil Havlik was enjoying a summertime picnic with his two sons in a wilderness area of the Los Padres National Forest when a bear came into view.

"We watched for five or 10 minutes as the bear was just poking around, looking up in the trees and sniffing," Havlik said. But when the big animal finally noticed the human observers, "He or she was gone in 10 seconds.

"It was really neat to see a bear. That's one of those quintessential wilderness things that you don't expect," he said.

Black bears--which actually come in many shades of fur besides black, including blond, red, and brown--are relative newcomers to SLO County. The local landscape was originally inhabited by their much bigger, fiercer cousins, grizzly bears--the same bears that gave Los Osos its name a couple of centuries ago when Spanish explorers enjoyed a bearmeat feast. Unlike the shy black bears, grizzlies are likely to stand their ground in confrontations with humans, making them an easy target.

Now that grizzlies are extinct in California, black bears are expanding their territory, moving beyond the mountains of their traditional homeland into the rugged ranges and rolling oak woodlands of the Central Coast. They're finding life pretty comfortable here, and it appears their numbers are increasing, according to Doug Updike, the statewide bear coordinator for the Department of Fish and Game.

"Bears are very cool," Updike said. "I think they're reincarnated from very old souls. You can see that they look like they're enjoying life. They like to take it easy."

Gloves, garden hoses, shoes--Updike has seen all of these items in bear scat, a sign of the animals' opportunistic eating style. Whatever they can't digest just passes straight through. 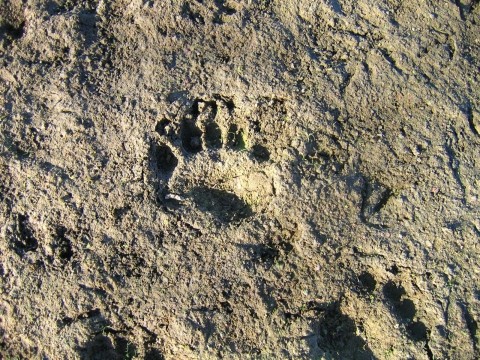 # Black bears are one of the seven species of bears on the planet, and live in much of North America. Intelligent and quick to learn, they were also the bears used as circus animals--a practice Updike calls "cruel, like keeping them in jail for the rest of their life."

Officially classified as California's largest carnivore because of their sharp curved claws and strong teeth, black bears are actually mostly vegetarian. Nearly all of the meat they do eat is already dead when they stumble upon it. Acorns and berries are among their favorite foods, but their dexterous lips and tongue are also good for gobbling up ants and other insects, as well as mushrooms and fungus.

With this fall's bumper crop of acorns and manzanita berries in SLO County, local black bears are fat and happy--and getting ready to hibernate. Soon they'll be crawling into a den under a fallen log and settling in for the winter.

Technically, their deep sleep is known as "seasonal lethargy," when their body temperature drops and their heart and respiration rates slow down, but they're not completely "out," Updike said.

And then--in another example of a black bear's easygoing lifestyle--the babies are born while the mother bear is asleep, around the beginning of February. Tiny, hairless, blind, and helpless, the bear cubs manage to work their way through their mother's warm fur to a nipple, where they latch on and start sucking. By springtime, "they're these cute little bears," Updike said.

The number of bear cubs born--usually between one and three to each mother in SLO County--depends upon how well the mother bear has been eating. Bear populations reflect the food resources available, and bears are self-regulating. In especially lean times, no cubs are born.

Seeing a black bear of any age in the wild creates a special moment even for an experienced bear biologist like Updike.

"They look at you kind of in an understanding way, like a dog," he explained. "They're so intelligent."

Still, they might not understand why any human would aim a gun or a bow-and-arrow at them. Bear hunting is already allowed in much of California for a limited season--due to close this year on Dec. 30.

Anyone who shoots a bear is required to send one of its teeth to Fish and Game officials, Stafford said.

"It's like rings on a tree," he explained. "You can tell the bear's age, and even when a mother bear had cubs. There's really some neat stuff you can get out of it."

# If the collected bear teeth show a decrease in the age of hunted bears over the years, that may be a sign of too much hunting pressure, he said, adding that adjustments can be made in the bear-hunting rules to reflect any changes.

Those stinky mackerel cans--claw marks and all--showed that black bears are living in the national forest near Pozo and the Cuesta Grade, as well as in Lopez Canyon and at the Chimineas Ranch in the eastern part of the county.

The decision about whether to allow black bear hunting in SLO County is up to the California Fish and Game Commission. Updike said the commissioners may discuss the issue sometime next year, and would hold three public hearings throughout the state before making any decision to allow bear hunting here.

"The final decision is a public process in a forum where biology, emotions, and politics all get rolled together," Updike said.

If the local bear populations grow too big, the animals may compete with one another for food resources. In that case, hunting would ease the strain, he pointed out.

Specific information about the exact--or even approximate--number of local black bears is still unknown, Updike said.

"The hunting of bears has to be closely controlled. We have to make sure the take doesn't exceed the capacity," he added.

For his part, SLO's natural resources manager Havlik thinks more information is needed before looking at a bear hunting season.

"Personally, I think maybe we should know more about the population levels of black bears in the county," he said. "I trust Fish and Game not to allow depletion of their numbers, and with modern regulations, I don't see hunting leading to the species being wiped out. But I don't know how good our habitat really is for black bears. We don't have high mountains like Santa Barbara County or Monterey County.

"I think bear hunting here might be premature. We need to consider how many bears there are, how rapidly they are reproducing, and how their habitat is. I think it probably needs more consideration. There's some basic information that needs to be brought into the equation," Havlik said.

Black bears are very adaptable, even to human-created environments, and are happy to take advantage of whatever opportunities they come across. In Monrovia in Southern California, for example, bears started moving into suburbia to find food.

"They're pretty smart. One was even sitting in a hot tub every night," Stafford said.

Still, if a bear does become a problem, "It's not the bear, it's the people who [caused it]," Updike insisted.

"We have to act responsibly, knowing they're there," he added. "You can't go camping and leave food out. I know of bears who have learned that a red-and-white or blue-and-white container is an ice chest--so cover your ice chest and keep it in the car. Keep all the windows rolled up, or a bear will smell the food. They can peel the door off a car to get it."

People who live at the edge of urban areas should be especially aware, Havlik said.

Black bears have been seen within a mile or two of San Luis Obispo, Havlik explained, and there's nothing to stop them from coming closer to explore what's available.

"They're opportunistic, and very good at finding food. Pretty soon they'll be picking locks!" Havlik joked. He recommends that local residents bring any pet food inside at night and keep garbage cans secure.

Bearproof garbage cans and bearproof food containers should be installed at Lopez Lake campground, where bears are becoming more common, Stafford said--noting that even that measure isn't necessarily the ultimate solution. The black bears in Yosemite have already figured out how to get into bearproof garbage containers, he said.

"The bears in Yosemite are extreme. They've figured out everything. They figured out our trapping system in a month, and learned to knock a log onto the trap to spring it so they could go in and get the fish. If they had opposable thumbs they'd be really scary!" Stafford said.

Public education is the ultimate key, he noted, adding, "It's a lot harder to regulate people than bears."

Feeding bears is illegal in California, punishable by a fine or jail time.

The Fish and Game Department has a website, www.keepmewild.org, with information about how to live around bears. "Allowing wild animals access to food is dead wrong," it states, since bears who have access to human food and garbage want more and more, and may become aggressive and have to be killed.

If you do encounter an aggressive bear, don't run, and pick up any small children so they don't run--black bears can easily outrun a human. Face the bear and make noise, wave your arms, bang on pots and pans, or wave a stick.

So far in SLO County, people are doing a good job at living around black bears, and few bears have become a problem. Seeing one of these intelligent creatures in the wild is still an experience to be treasured, even if you're not a hunter.

As Updike put it, "People in San Luis Obispo should be excited and feel honored to have black bears. They're one of the wild icons that defines the West."