Bears win a reprieve from hunting 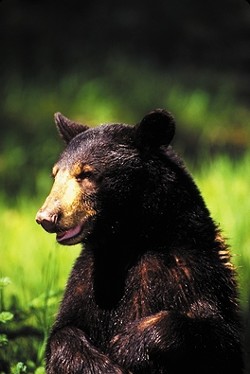 The California Fish and Game Commission has backed off from declaring an open season on SLO County’s black bears after receiving more than 550 letters and e-mails in opposition to the proposed hunting.

During a teleconference on April 21, the commissioners unanimously decided to take no action on the hunting plan for now, and to bring the issue back to the table next February.

The environmental document prepared by Fish and Game staff in support of black bear hunting—known as a “Negative Declaration” under California’s Environmental Quality Act—had been widely criticized because it did not include information about the number of black bears in San Luis Obispo County. Instead it included a map of suitable bear habitat.

An attorney for Los Padres ForestWatch, Bill Yeates, presented detailed comments questioning the Department of Fish and Game’s conclusions that hunting black  bears would have no significant environmental effects.

Yeates also questioned another proposal, which would have eliminated the statewide limit of 1,700 black bears killed per year, replacing the limit with an open hunting season from July to the end of December. The commission took no action on that plan.

In an interview from his Sacramento office after the teleconference, Yeates explained the commissioners’ decision: “They recognized there was some legal vulnerability in the Negative Declaration, and they may have been persuaded by local officials’ letters.”

Yeates said without any baseline information on the black bear population in San Luis Obispo County, there is no way to determine the impact of removing 50 bears a year by hunting. The California Environmental Quality Act, or CEQA, requires a description of the “existing environment,” he said.

“In the worst case, if there are 50 bears in the county, and you kill 50, then there are zero,” Yeates added.

He spoke to the commissioners by telephone during their teleconference, pointing out that black bear habitat throughout the state is likely to be affected by global warming.

The meeting was streamed live through the commission’s website, enabling interested people to listen in. The disembodied voices of the five commissioners were difficult even for the staff to recognize, with the clerk asking who had made the motion to take no action: “I couldn’t tell who that was—Mike or Dan?” she asked.

After the meeting, Jeff Kuyper of Los Padres ForestWatch said the commission’s vote was “very positive,” adding, “Certainly the commission got the message. The proposal was not based on sound science. People were upset that the whole process seemed to be taking place behind closed doors hundreds of miles away.”

He called for DNA studies to determine the number of black bears in SLO County, saying, “Fish and Game will kick and scream because that will cost money, but their mission is to protect the state’s wildlife. If the information is too expensive, either they need to raise the money or drop the project.”

Fish and Game biologists are hoping to use radio collars to learn more about bears’ movements around the county, wildlife biologist Bob Stafford said in an interview.

“We can’t do a good census. We can’t fly over and count them, like we do with deer or elk,” Stafford noted. “But over the next few months, we’ll try to put some collars on bears to store GPS data.”

The commission’s decision not to open a bear hunting season in SLO County was welcomed by Brian Vincent of Big Wildlife, who said his group would push to end all black-bear hunting in the state.

“Most Californians don’t agree with chasing bears with radio-collared hounds and treeing them, just so the bear can end up as a rug in front of someone’s fireplace,” Vincent said.

Contributing writer Kathy Johnston may be reached at kjohnston@newtimesslo.com.