There’s something cathartic about beating the skins. Hmm. That sounds vaguely dirty. Rephrase. Playing the drums feels awesome! Of course, I don’t really play the drums so much as hit them, which is why I respect those who actually take lessons and practice their craft. Real talented drummers will be showing off their skills on Sunday, April 29, during the 23rd annual Drum Circuit Drum Competition, which starts at 1 p.m. at The Graduate. 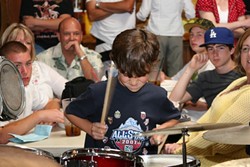 “Come see 20 local drummers compete for killer prizes in two age categories—15 and under and 16 and up,” said Drum Circuit owner Howard Emmons. “There’re also demonstrations by previous winners, the Drum Circuit staff, and local percussionists Keeth Crowhawk (on mid-east drums) and the Marching All-Stars led by Zach Hubbard! We’ll be giving away drum sets by Sonor and Yamaha, snare drums from Mapex and DW, cymbals from Zildjian and Sabian, as well as sticks, heads, and accessories.”

Admission is free, and proceeds from the raffle benefit the Central Coast Autism Spectrum Center in SLO. Call the Drum Circuit at 543-0338 or e-mail howard@drumcircuit.com with any questions. After the competition, stick around when local AC/DC tribute band High Voltage plays a closing set, but first witness 20 drummers channeling their Neil Peart, John Bonham, Keith Moon, Ginger Baker, Terry Bozzio, and Bill Bruford!

I first got to know Greg Baldwin, a.k.a. Spanky, when he played with a Grateful Dead-inspired band called the Sky Dogs, or maybe they spelled it Skydogs? Point is, it was about 25 years ago, and over those many years Spanky has become a fine picker and singer in acts like Three Legged Dawg. But up until recently, he didn’t seem that interested in writing his own songs … until now! 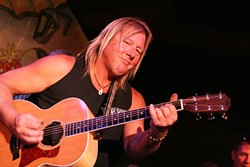 Ladies and gentleman (insert drum roll here), may I present Coop’d Up, Spanky’s brand new collection of original Americana treasures, which he’ll be releasing on Sunday, April 29, at Frog and Peach from 4 to 7 p.m., with special guests Hayburner opening the show. And if you’re not 21, you can see Spanky during a pre-CD release show at Fins on Saturday, April 28, from 6 to 9 p.m. Both shows are free, but bring a sawbuck if you want to buy a CD (that’s $10, greenhorn!).

“Well, if you had told me a year ago I would be recording a CD this year, I would have just laughed and played ‘Mr. Bojangles’ again,” Spanky said. “I’m pushing 50 and have played music at venues around town for over half my life, but I’ve been playing all other people’s music. (I think a lot of the cover tunes I play will always be in the rotation because they need to be remembered or discovered.) Over the past couple years, I’ve been frequenting Steve Key’s Songwriters at Play, and it really started me thinking about writing … I just thought about it, though. Then this last year I saw a couple key changes and a turning point.

“In 1998, I started working as a project manager at a local construction company, and at almost the same time I started raising my two children by myself as a single dad. In June 2011, after many years, the housing market finally caught up with me, and at no fault of the company—I hung on a lot longer than I thought—I found myself unemployed. In September, my oldest (now 21) was off on her own and my youngest turned 18 and is able to look out for himself, so my workload (and stress-load) changed quite a bit.

“I had time to do whatever I wanted … maybe not the money, but who does? So all of a sudden I had time to really play music, and even practice, too. Probably the biggest push though came in November, when I played a house concert with Tim and Nikki Bluhm. I had met Tim and Nikki through friends a couple years ago, and I was playing the concert during the ‘food and beverage’ time, so not many people were paying attention as I was the ‘social hour background music,’ but Tim and Nikki sat in the front row to see what Spanky had to offer … and I had nothing, just a bunch of other people’s songs. The gig went good and they were both very cordial with respects to my performance, but I felt almost like ‘it’s all fake.’ I was talking to Tim after about writing songs and told him I had a problem with the idea of writing lyrics, and how they may be perceived, and how I may be perceived by writing them. His response was so simple but it really hit home. He said, ‘You just gotta do it.’

“I went to Pappy and Harriet’s on the 11-11-11 weekend to see the Mother Hips the following weekend, and when I got back I wrote the first song, The Desert Pearl and less than four months later I was standing at U.P.S. mailing off my first CD to Texas for replication of 1,000.

“The songs just started oozing out—songs about friends and memories and nonsense loaded with secret Masonic hippy messages à la Dan Brown. I decided in December to go record some of them and maybe a few covers for a demo disc to send to venues. I chose to record with Tyson Leonard (of Tropo) in the Colorado Room of Black Box Studios in Atascadero. My first session, I was a deer in the headlights, and after listening to what I had done that day, I scrapped everything. I decided I wanted to make a proper CD. With a lot of help (and patience) from Tyson, I was soon able to lay down the base tracks for the songs. I enlisted my good friends Andy Bird to play stand-up bass on a few songs and Fred Rodriguez to play a lead on one. These guys are top-notch musicians I’ve played with for the last 25 years and could have added a lot more musically to the project, but I felt that if the CD was by Spanky that I was obligated to play as many of the instruments as I could. I didn’t want to misrepresent myself. And Tyson pitched in and played fiddle on ‘Lil Buddy.’ Rick Sutton of Sutton Sound did the mastering.

“One of the missions of the disc was to show that anybody could do it. My songs are simple, and I’m not a great singer, guitar, banjo, or ukulele player. I just really love to play music, and my songs are about people and things that I cherish. I think that a good part of the reason for how quickly I wrote and recorded the songs was that I was planning an April California tour (April 7 through 24, from San Diego to San Francisco), and I figured it may be possible to have a disc to bring with me, so I worked the schedule backwards from there, hit the studio religiously, and sold my truck to pay for it. It’s the closest thing to having children I have ever experienced. So I’m writing this as the stork brings my baby from my old home state of Texas.”

Don’t let Spanky fool you! His rustic voice feels like a comfortable pair of jeans, and his pickin’ is like a fancy cowboy shirt to go with ’em. Think of his songs and lyrics like an old pair of work boots that fit just so. Cheers to a man who faced his fears! 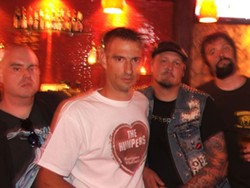 Gotta hand it to Katalena Pennington over at The Z Club. She’s almost single-handedly transformed the neighborhood bar into an awesome nightclub! Case in point: On Friday, April 27, the club will be host to Swamp Angel, Memphis Murder Men, and Dead Zed’s Chopper. Swamp Angel is a reverb-ridden voodoo rock act that will remind listeners of The Beat Farmers. Memphis Murder Men describe themselves as “’50s rock’n’roll’s bastard child.” And Dead Zed’s Chopper (thanks for Pulp Fiction reference) is a hard-hitting four-piece rockabilly act.

“Robert from Swamp Angel was in the original DeadBolts, who spent decades touring with Rev Horton Heat and has now branched off to start a whole new band with help of Matt who used to play in Stellar Corpses and Matt from the Gin Demons and Mad Science,” Katalena said.

“The guys from MMM have toured with the Misfits, Tiger Army, and many more hugely known bands and hail from Pittsburgh but moved out to Cali and now live in North Cali. They’ve toured all over, playing with some of the great punk and rockabilly bands of the past decade.

“DZC are our very own local boys out of Santa Maria and Lompoc,” Katalena added. “Most of them are related: The upright bass player Kevin has his son Philip, who is only 14, tearing it up on guitar. Personally I was amazed at Philip only being 14 years old and having such talent. He’s going to go far in the music world!

“This is my passion,” finished Katalena, “and I want to keep our local scene alive and thriving with bands from newcomers and bands that have been around for years and decades. I hope to bring many more bands through the area and hope that by the time my son is old enough to go to shows that there is still a scene here.”

Now get thee to the Z!

Of course the big SLO Brew news is their Lindsey Buckingham show at the Fremont Theater on Tuesday, May 8 ($43 tickets are going fast! Get ’em at Boo Boo’s or Vallitix!), but before that show, the club has a few other gigs cooked up for you, starting on Thursday, April 26, with honky-tonk heroes Jackson Taylor & The Sinners (7:30 p.m.; 18-and-older; $10 presale or $12 at the door).

Come Monday, April 30, melodic rockers Go Radio return to the club (6 p.m.; all ages; $12 presale or $13 at the door), with The Providence and Simple as Surgery opening. Go Radio is a blazing white-hot rock band from Tallahassee who’s been touring the United States in support of their 2011 debut album Lucky Street. They’re just about ready to drop their sophomore album later this year, so they should have some new material for you. 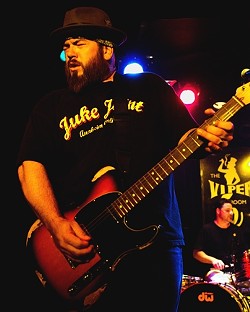 Driving blues act The Harlis Sweetwater Band is heading to SLO and Paso to play in support of Lights Goin’ Down, a blistering seven-song EP filled with Sweetwater’s whiskey-soaked voice, ripping guitar, and old school Chicago style blues. See him Thursday, April 26, at Frog and Peach and Friday, April 27, at The Pourhouse.

Minnesota singer-songwriter Peter Mayer plays Sunday, April 29, at 7 p.m. in the new home of the Unitarian Universalist Congregation (2201 Lawton Ave., next to Meadow Park). “This concert is a gift to the community and the SLO County Food Bank in celebration of our new home,” said Rev. Sean Parker Dennison, interim minister of the fellowship. “We welcome everyone to share in this joyous musical event! Peter Mayer will send people home smiling and humming his wonderful tunes.” Tickets are a suggested donation of $20, and are available at brownpapertickets.com and at the door.