Salinas artist Janet Roberts and actor-turned-abstract-painter Billy Zane met by chance one day in Los Angeles, where Roberts had an art show. The two got along extraordinarily well: With the ease and simplicity of friendship usually enjoyed only by small children, they were painting together the next day. 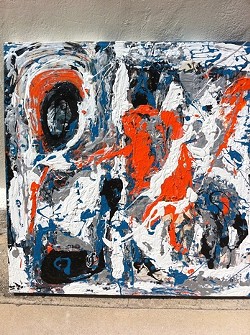 “We just really hit it off,” explained Zane, probably most well known for his role as Caledon Hockley in Titanic. “We were co-creating from the outset. We met in that very unique, collaborative manner.”

The pair has been working together for the past year, and a group show at Cambria’s Vault Gallery will reveal new work. The exhibit—titled “You Done With That?”—features the abstract expressionist paintings of Zane and Roberts alongside the glass assemblage and bronze sculpture of Lucy Harvey and Gustavo Torres, respectively.

Roberts’ work calls to mind Rothko and sometimes Pollack, and her giant, delirious swaths of color are the sort you could easily drown in. Her paintings are daringly optimistic, almost frighteningly so.

Roberts, an expert in art history and a onetime successful art consultant, reinvented herself as a painter after a bout with cancer gave her a glimpse into life’s brevity.

“My work is not for a cynic,” she said. “It’s not somber and dark. Francis Bacon would not appreciate it.”

Messages of hope—sometimes fragmented or obscured in the background, other times glaringly there—give voice to a soul that’s survived grief, cancer, and other hardships, and healed itself by creating beauty where once there was none. Roberts’ shows often benefit charitable causes such as Rancho Cielo, a nonprofit that provides programs for at-risk youth.

While both artists are clear talents in their own right, Roberts’ art savvy plus Zane’s name make for a powerful duo.

The two certainly take inspiration from one another, but there’s only one truly collaborative piece in the show, a work called A United Front. And that front was united, it turns out, quite by chance.

“It was a painting that I had executed,” Roberts explained. “Billy came to my studio, and I was too lazy to go and get a blank canvas from my trailer.”

Though Zane was hesitant to simply paint over Roberts’ art, she said, he obliged after she insisted “whatever you do, it will make it better.”

The resulting work, in which the words “I am love” are visible over a murky, dark background, became the de facto signature piece of the Vault Gallery show.

That kind of artistic recycling is a staple of both painters’ work. Both use materials found in the dump or donated by house paint companies. Roberts uses water-based, environmentally sustainable paints on organic cotton canvas. Zane is known for picking things up off the street and incorporating them into his art pieces.

“I like working from a place of limitation,” Zane said, “where you do what you find, what’s available, whatever’s there.”

A large wooden banquet table, discovered in a Los Angeles alleyway, was inducted into Zane’s newest body of work.

“It was just sitting there,” he said. “It was six, seven feet tall ... and I just picked it up off the street and wheeled it home. You know, the anomalies in it are just very beautiful to me.” 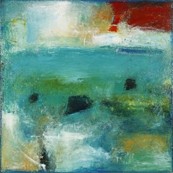 That piece will be one of several to make an appearance at an upcoming art show in Berlin, part of the German capital’s inaugural World Peace Festival. When Zane was invited, he said, he was asked to recommend a few artists of note to accompany him, and Roberts was at the top of his list. The festival will be host to Nobel Peace Prize laureates, world leaders, humanitarian activists, and artists in a week of lectures, workshops, and exhibits.

Zane’s passion for painting was born while he was shooting Titanic in Mexico. He found that his filming schedule left ample free time, and he began creating abstract paintings when not busy trying to quell Jack and Rose’s burgeoning, if doomed, romance.

Held at the Frank Pictures Gallery in Los Angeles, Zane’s first solo show, “Killing with Love,” was a collection of work dating back to the late ’90s.

“Filmmaking has informed my painting probably more than any other art form,” Zane said.

Over the course of his film career, he elaborated, he’d become accustomed to offering up his artistic efforts for mass scrutiny. Confidence, he knew, was key.

“It was always about amassing enough pieces that I felt comfortable with,” he said, “whether anyone likes them or not ... if it’s up to my own standard, it’s fine for public consumption.”

At one point in his interview, Zane asked if he could call this writer back in five minutes, and when he did call back, he was maneuvering the streets of Los Angeles by bicycle (“I try to use the car as little as possible”).

As an abstract artist, Zane doesn’t intend to create the literal forms that sometimes appear on his canvas, he said, and when they do appear, he restrains himself from making them too obvious. This, too, he likens to filmmaking: “For all the preparation that goes into it, it comes down to being worthy of the beautiful accidents that occur.”

The artist’s 1997 work Madonnarama is a fine example. The Virgin Mary seems to appear on the canvas, as she has on so many grilled cheese sandwiches, a testament to our human craving to give shape to blobs, to find meaning in the random and make it sacred.

But Zane is ever-reluctant to give names to his pieces, seeing that practice as another way of unnecessarily pinning down a purely abstract expression.

As he puts it when describing the freedom of his first paintings, uncluttered as they were with art theory or criticism: “Ignorance is precious.” ∆

Arts Editor Anna Weltner thinks Picasso will never amount to anything. Throw her a life preserver at aweltner@newtimesslo.com.