Beaverstock at Castoro Cellars promises great music on Sept. 19 and 20

Beaverstock’s this weekend, which means it’s time to pack up some low-back chairs or a blanket, gather up your friends or family, and head up to Castoro Cellars winery for what’s developed into one of the premiere music events of the year.

Like the Live Oak Music Festival or the Seven Sisters Fest, Beaverstock aims to be all things to everybody—the music selection is high quality and diverse, aside from music there’s plenty to do for people of all ages, and the food and beverage choices are excellent.

On Saturday, Sept. 19, the music starts at noon on the smaller Stompin’ Grounds Stage with Morro Bay’s alt-country and folk act The Turkey Buzzards. At 1 p.m., head over to the Beaverstock Main Stage for SLO Town’s The Tipsy Gypsies who play Django Reinhardt-style. This band played my wedding, that’s how awesome they are.

At 2 p.m., head back to Stompin’ Grounds for One Time Spaceman, singer-songwriter Mark Adams’ jazzy-funky ensemble, and then back to the main stage at 2:30 p.m. for folk/roots, jazz, classical, and world music act The Bills. Are you starting to see the pattern? Yeah, it’s wall-to-wall music from noon to 9:30 p.m. both days.

One Time Spaceman returns to Stompin’ Grounds from 3:30 to 4 p.m., then Brazilian dance act SambaDá plays the main from 4:15 to 5:30 p.m. Then The Bills hit Stompin’ Grounds from 5:30 to 6 p.m. followed by a 6 to 7:30 p.m. main stage appearance by The California Honeydrops, a hugely entertaining R&B, funk, Southern soul, Delta blues, and NOLA-style second line act. The Bills play one more 7:30 to 8 p.m. set on Stompin’ Grounds and then it’s time for headliner Dawes to close out the first day on the main stage from 8 to 9:30 p.m. This L.A.-based ’70s-style rock band has been blowing up since the release of their fourth studio album, All Your Favorite Bands. After Beaverstock, the band heads out on an international tour through the U.S. and then on to Australia, New Zealand, and Mexico. I tried to get an interview with them, but they were in Europe.

On Sunday, Sept. 20, there’s another full day of that bounce between stages. On Stompin’ Grounds, check out local Americana and power-folk duo Bear Market Riot from noon to 1 p.m. followed by Americana singer-songwriter Chris Beland from 2 to 2:30 p.m. Guitar guru Guy Budd and chanteuse Inga Swearingen play two sets on Stompin’ Grounds from 3:45 to 4:15 and 5:30 to 6 p.m. Samba act Samba Loca plays 7:30 to 8 p.m.

Meanwhile over on the main stage, comic country act The Mother Corn Shuckers play from 1 to 2 p.m., followed by Bay Area string band The Brothers Comatose from 2:30 to 3:45 p.m. After Beaverstock, they’re off on a California, Colorado, Arkansas, and Florida tour. Folk duo Birds of Chicago takes the stage from 4:15 to 5:30 p.m. with Grammy-winning Latin act La Santa Cecilia, who blew me away when they played Live Oak, performs from 6 to 7:30 p.m. Funk act WAR, which got its start way back in 1969, headlines the final day of Beaverstock with a show from 8 to 9:30 p.m. Known for hits such as “Slippin’ into Darkness,” “Low Rider,” “Spill the Wine,” “Summer,” “Why Can’t We Be Friends?” “The Cisco Kid,” and “The World is a Ghetto,” they’re one of the most iconic acts from the ’70s.

Now in its third year, Beaverstock was originally meant to be a one-time event to celebrate Castoro Cellars 30th anniversary.

“We wanted to do something that was a big fun party and to give back to the community that made it possible to be here,” said Beaverstock organizer Luke Udsen. “We had so much fun [that] we decided to continue on, and every year it’s gotten better. It’s the type of festival with so much to do that it’s easy to spend the whole day, and it’s very family friendly—kids under 10 are free. Even if you haven’t heard of the bands, each is a top-notch act we’ve hand selected. Some are groups who’ve played concerts at the winery or that we’ve seen somewhere else, but after 20 years of bringing music, people know that even if they don’t know the band, it’s going to be good.”

Visit castorocellars.com for tickets. If not sold-out, remaining tickets will be sold at the door. Niels and Bimmer Udsen founded Castoro Cellars in 1983, and today run it with their sons Max and Luke. All proceeds from the festival go to a cause near and dear to their hearts, the Templeton Education Foundation, a nonprofit that directly benefits students in the Templeton Unified School District both Max and Luke attended from first grade through high school graduation. 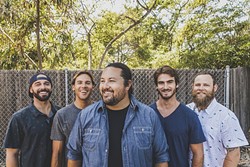 Pozo Saloon hosts Reggae on the Range this Sunday, Sept. 20, with Iration, The Expendables, The Green, Common Kings, and more (gates open at noon; all ages; $30; pozosaloon.com or at Boo Boo Records).

Based in Hawaii, headliner Iration mixes reggae, rock, and pop into their keyboard and synth-driven sound. Their new album Hotting Up is awesome. Santa Cruz-based The Expendables deliver surf and skate culture reggae, punk, and ska with dueling guitars. The Green is another Hawaii-based reggae act that mixes soul and R&B into their sound. Common Kings mix their Polynesian roots with rock, reggae, and R&B.

This promises to be a full day of fun in the sun for the whole family. Children under 10 are free. Firefighters need only to present credentials to get in free with a guest!

Dan Curcio and The Shakedown plays Friday, Sept. 18, at Tooth & Nail Winery for another free, 5 p.m., Good Medicine Presents pop-up concert. I’ve seen Dan as Still Time and Moonshiner Collective, but I don’t know what’s he’s up to in this new act. It’s bound to be good, though!

Nipomo’s DANA Cultural Center has a concert featuring Grammy Award-winning songwriter and performer Louie Ortega on Friday, Sept. 18, from 6 to 9 p.m. ($25 at danaadobe.org or 929-5679). The Sir Douglas Quintet and the Texas Tornados sideman will be joined by Rob Espinosa on electric guitar (It’s a Beautiful Day), Greg Smith on saxophone (The Eagles), and Dean Giles on drums (a longtime session drummer).

Good Medicine Presents has a bunch of good shows cooked up at SLO Brew this week, starting with eclectic Texas folk rock duo The Oh Hellos and their “Dear Wormwood Tour” on Friday, Sept. 18 (7:30 p.m.; all ages). The Holdup with The Wheeland Brothers plays Saturday, Sept. 19 (7:30 p.m.; all ages), and Lou Barlow of Dinosaur Jr. and Sebadoh plays Wednesday, Sept. 23 (8 p.m.; all ages). Visit goodmedicinepresents.com or slobrewingco.com for all the details. 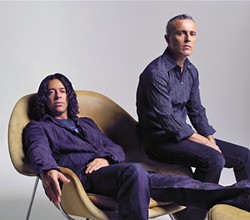 Can you believe the Performing Arts Center on the Cal Poly campus is 19 years old? It is, and to celebrate its upcoming 20th season, they’re hosting a rockin’ and roarin’ gala ball and behind-the-scenes speakeasy Saturday, Sept. 19 (8 p.m.; craft beer, wine, and dessert tastings; tickets are $55; fpacslo.org). Jump blues and swing band The Sugar Daddy Swing Kings will play for your dancing pleasure. Period dress optional.

Vina Robles Amphitheatre has three events this week starting with awesome ’80s English pop act Tears for Fears. Remember them? “Shout, shout, let it all out!” The song “Shout” and “Everybody Wants to Rule the World” were huge hits for the band. Roland Orzabal and Curt Smith released The Hurting, Songs from the Big Chair, and The Seeds of Love, enjoying worldwide fame until their breakup in 1991. They eventually reunited and released Everybody Loves a Happy Ending in 2004, and they’ve been at it ever since. See them Saturday, Sept. 19, at 8 p.m. Tickets available at vinaroblesamphitheatre.com.

Punk ’n’ roll act The Bunker Club just released a killer new EP called Radio Festivo, a cow punkish collection of head banging anthems. The band formed two years ago and is fronted by Pete Truent, whose been a drummer in punk acts for 20 years but decided to get out from behind the kit, grab a guitar, and take center stage. See them this Saturday, Sept 19, at Camozzi’s (8 p.m.; $5 at the door). Off Center & The Holes, Magazine Dirty, and Hayley and the Crushers share the bill. Oh, and say “Happy Birthday” to Pete, because it is! 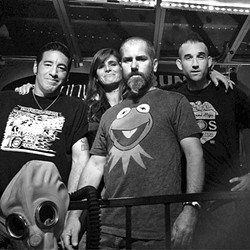 George Thorogood & The Destroyers with Buddy Guy plays Vina Robles on Sunday, Sept. 20, at 6:30 p.m. Iconic bluesman Buddy Guy, 79, influenced everyone from Jimi Hendrix to Stevie Ray Vaughan. Thorogood, 65, is a great boogie blues player with classic songs such as “Bad to the Bone” and “I Drink Alone.” Blues fans aren’t going to want to miss this! Tickets available at vinaroblesamphitheatre.com.

Foodies and music lovers might want to mark their calendar for Thursday, Sept. 24, when Sunset’s Savor the Central Coast opening event Strings at Sunset Opening Night Party hits Vina Robles Amphitheater at 6 p.m. “This highly anticipated taste-bud-tempting, gasp-worthy kickoff transforms the Vina Robles Amphitheatre like you’ve never seen it before,” claim organizers. “Join us as the Amphitheatre morphs into a multi-sensory wonderland featuring theatrical performances from award-winning artists String Theory and DJ Violinist Spags, and all-inclusive food and wine tastings throughout the venue.” Tickets at www.savorcentralcoast.com/special-events/strings-at-sunset.html.

Don’t forget to put Friday, Sept. 25, on your calendar for the seventh annual New Times Music Awards at the Fremont Theater (7 p.m.; all ages; $10; the first 400 people get a free copy of this year’s compilation CD).

Doors open at 6:30 p.m. and beer and wine will be available. The Bucket Busters will open the show, which will feature performances by Wynn, Joe Koenig, James Kaye, Nothing Ever Stays, and Captain Nasty.

See who won the various genre categories, Songwriter of the Year, Album of the Year, the Readers’ Choice Award, and which performing act will be awarded Best Live Band.