Editor's note: Beda’s Biergarten let New Times know on June 25 that BedaFest was canceled as originally planned due to an “unforseen situation” with the venue. The Friday night pig roast will now be a Saturday night pig roast and the Saturday family event was canceled. The pig roast party on June 29 will be at Beda’s Biergarten from 5 to 10 p.m., and includes a sit-down dinner featuring a spanferkel pig roasted on-site, soft pretzels, side dishes, and dessert. New ticket reservations are being offered first to guests who have already ordered tickets (those who ordered tickets via Eventbrite will get an email with information about refunds and how to attend the rescheduled roast). Tickets are $35 for dinner, and $60 for all you can eat and drink (payment will be taken at the restaurant, 3230 Broad St., SLO).    Updated July 26, 2019

Bust out your lederhosen because next weekend, Friday, June 28, and Saturday, June 29, the third annual BedaFest returns for two days of amazing food and serious fun at Hacienda Antigua (4900 Davenport Creek Road, SLO, near SLO Airport; tickets at go.blueascension.com/bedafest).

If you're a patron of Beda's Biergarten, you've probably already heard about this annual extravaganza, which is expanding to two days this year. 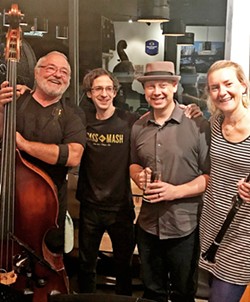 Friday is a 21-and-older all-inclusive evening of Spanferkel roasted pig—all you can eat and drink for $95 (5:30 to 10 p.m.). Saturday is filled with family fun, games, and incredible German food like schnitzel, wurst, and Beda burgers ($35 entry and a la carte food; kids 12 and under free). You can also treat yourself to all you can eat and drink on both days for $150.

The brainchild of Beda Schmidthues—who's as German as they come—the event is a celebration of authentic food and German beers, and it also features music by the Short Attention String Band (on both days) and Twice Cooked Jazz (on Saturday).

John Hiatt is arguably the finest songwriter alive, with classics such as "My Old Friend," "Before I Go," "Lift Up Every Stone," "Cry Love," "Master of Disaster," and many more to his credit. 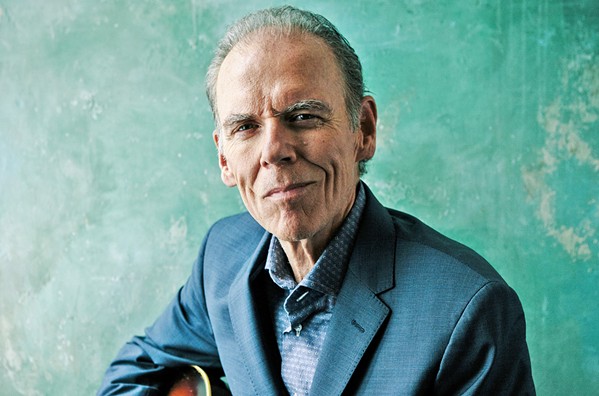 "You know how writing goes for me," John Hiatt said in press materials, offering a glimpse into his creative process. "I get a couple of lines going, and then I just tag along as the songs start to reveal themselves. You've just gotta jump inside and take the ride."

What a long and amazing ride it's been starting with Hiatt's 1974 debut, Hangin' Around the Observatory, right up to his 23rd studio album, 2018's The Eclipse Sessions.

Few writers are such keen observers of life, even fewer still such skilled storytellers and gifted wordsmiths. Check out the lyrics to his newest album's opener, "Cry to Me."

"Getting dark and it feels like trouble/ Heating up just like the fallin' evening rain/ Tongues so sharp they could burst any bubble/ Nobody wants to talk about all that pain/ They're all having fun playing with your feelings/ You can't control it, it just breaks your heart/ Dirty double crosses done with underhanded dealings/ When all you ever wanted was a place to start// Come on and cry to me baby/ You can even lie to me baby/ I'm probably gonna let you down but/ I swear I won't keep you down/ I swear I won't keep you down."

I don't know about you, but I love Fred Armisen. From Portlandia, to his Barack Obama impression on Saturday Night Live, to roles in films such as Anchorman and The Dictator, he always cracks me up. 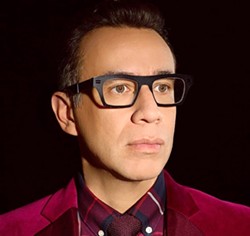 He combines his musicianship, acting chops, and comic genius in his show Comedy for Musicians but Everyone is Welcome, which Numbskull and Good Medicine Presents is bringing to the Alex Madonna Expo Center on Monday, June 24 (6 p.m.; all ages; $26 presale at Boo Boo's and ticketfly.com or $30 at the door).

If it's as funny as his Standup for Drummers on Netflix, it's going to be hilarious!

Also this week from Numbskull and Good Medicine, check out blues legend John Mayall at The Siren on Wednesday, June 26 (6:30 p.m.; 21-and-older; $32 presale at Boo Boo's and ticketfly.com or $35 at the door). The often-called "Godfather of British Blues" is a terrific blues singer, pianist, harmonica player, guitarist, and songwriter who founded John Mayall & the Bluesbreakers in the 1960s.

Next Thursday, June 27, see Texas country star Josh Ward at BarrelHouse Brewing (6 p.m.; all ages; $20 presale at Boo Boo's and ticketfly.com or $25 at the door), with opener Charlie McNeal.

Wolf at the door

Local rock act Eat the Wolf plays an album release show at the SLO Brew Rock Event Center this Saturday, June 22 (7 p.m.; 18-and-older; $10 presale at slobrew.com; $15 at the door; standing room only). Drawing influences from '90s rock acts like Soundgarden and Alice In Chains, as well as Queens of the Stone Age, Deftones, Royal Blood, and others, expect an ear-bleeding good time. The Bogeys and The Ragged Jubilee will open.

Excellent Santa Margarita public house, Dunbar Brewing, is moving to Atascadero, but before they go, they're having a music-filled blowout on Friday, June 21 (9 p.m.; 21-and-older; free).

Local band The Moronez, featuring seasoned local players such as Miles Brown and Steve Burt, will open, followed by San Jose band The Bone Shavers. Burt plays bass with both bands, and it's his birthday that night, so punch him in the arm ... hard.

If you've never seen The Bone Shavers, go! Their bio is a hoot: "Legend has it that on a dark night long ago, deep in the bowels of a San Jose basement, a black cat bone stew of music was concocted under the spell of one Johnny Mojo. One cup punk rock, a heaping tablespoon of rockabilly, and a thousand dashes of reverb, this recipe was refined over the years, resulting in a sound that can only be The Bone Shavers. Blending in voodoo vocals from famed Santa Cruz skateboarder/downhiller Bob Denike, and a wretched backbone of Rory Koff on drums and Steve Burt on bass, The Bone Shavers have been using Mojo's original tunes, along with well selected covers from days gone by, to whip crowds into a frenzy for years. A word of caution, though—if you're lucky enough to catch them live, your bones may be subject to more than just a shake, rattle, and roll."

Indie-rock act B & The Hive will release their new single, "Phases," on Friday, June 21, at Morro Bay's The Siren. It's an arresting tune that features frontwoman Brianna Lee's gorgeous vocals. According to band member Josh Barrett, the song was "written in the span of about 20 minutes around midnight one evening" by him and Lee and "then recorded entirely at home in their bedroom studio and finally sent off to be mixed by Grammy Award winning engineer Mike Cresswell." That's DIY indie rock at its best! With Lee on vocals and guitar and Barrett on bass, the band is rounded out by Hannah Joy-Brooke on keys and backing vocals, Hayden Gardner on drums, and Eric Novak on lead guitar. 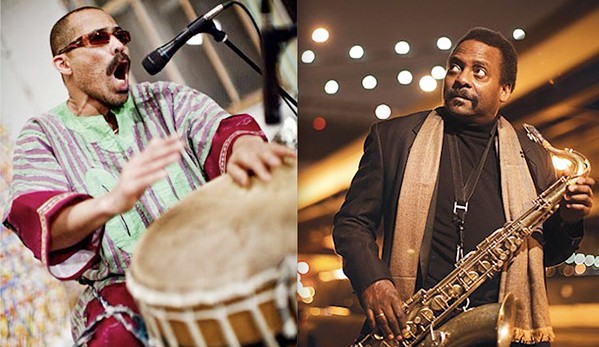 "These guys are true legends in their genre, albeit a small genre," Friedman noted.

With Murray on saxophone and El'Zabar on percussion, you'll hear forays into familiar bebop sounds as well as an expansion into experimental territory. Jazz fans, don't miss this one! Local, mostly female garage rockers Hot Tina are about to depart on their Pacific Northwest tour, but before they hit the road, they're hitting Frog and Peach on Tuesday, June 25 (10 p.m.; 21-and-older; free).

"Keeping it a lady-heavy evening, [new local act] Platinum Disturbia will be debuting on the Frog and Peach stage and rockin' their socks off as well," Shea Kelly of Hot Tina said. "We're hittin' all the biggies with our Summer of Hex rock tour. Pint Night will be our big sendoff show. We're debuting our new single and we're excited to jam out in our hometown with a Hot Tina rock show!" Δ