The thing about Beda’s is that you keep going back.

At least I do. It’s quickly become my “third place,” an oasis removed from work or home supplied with its own culture and cast of characters. You can hang out for hours with a beer and chew the fat with Beda Schmidthues himself, or you can scoot up to a community table and make a few new friends over authentic brats and sauerkraut. It’s amazing. People actually put down their phones and talk to each other! 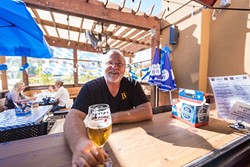 “The reason we opened Beda’s was because we felt there was nothing like it outside of downtown, and we just wanted to create a place where people can go and hang out,” Beda said. “We are an original German pub: We serve good food; we serve good drink; and you can come enjoy, hang out, and have fun.”

With open windows connecting the dining room to the covered patio, a meal here always feels joyful and light—even though the flavors are decidedly hearty. Maybe that’s because Beda and his wife, Helga, started out in their own backyard. Literally.

For years, the couple’s family-style dinner parties were legendary in SLO. The modern German pub—which opened about four months ago at 3230 Broad St.—doesn’t stray too far from those backyard smorgasbords. You come. You eat. You drink. You enjoy the people you’re with. Only now, there’s a full kitchen to play with and a whole lot more beer.

Beda grew up in Duisburg, located along the Rhine and Ruhr rivers in Germany (beer geeks should note that this is also the home of König Pilsener). The kitchen always symbolized a sense of comfort.

“Helga and I grew up in a culture where you cooked at home and everybody had their own recipes,” Beda said. “We didn’t have frozen dinners or T.V. dinners. On weekends the big meals were lunch and you’d have goulash or rouladen or schnitzel. It wasn’t ‘froo-froo.’ Think home cooking, but just awesome.”

Note: Those beloved, well-worn German dishes have found new life at Beda’s, which serves up satisfying slow simmered beef goulash as well as pork and chicken schnitzel, which is tenderized, breaded, and fried before being drizzled with delectable, creamy sauces. The rouladen—bacon, onion, and pickle rolled in sliced beef and paired with mashed potatoes and gravy—tastes just as good as when Beda was a kid. Thanks to a bit of refinement from Helga, it may even be better.

“Most of our recipes are family recipes, and I never put them to a specific region; I just liked them,” Beda said. “What you have here is the end result of everything we learned growing up. Then we did our own experimentation with those flavors.”

Popular Berlin street food like currywurst collides with fresh sandwiches like the schnitzelbrot (chicken or pork schnitzel on a pretzel roll with caramelized onion, tomatoes, baby kale, and lemon aioli).

Feeling famished? Order up the fresh-made spätzle noodles and choose your cheese, meats, and veggies, or go for the frikadellen—two tender, flattened spiced meatballs served with hot mustard. Pair it all with a frosty stein of Früh Kölsch, and you’ve got the right idea.

As a college student, Beda said he was absorbed in two all-important things: “party” and “sport.” Between those two activities sat cooking—something he did less out of necessity and more because he absolutely loved it.

“My mom cooked and my dad cooked, but I really learned cooking when I moved out and started cooking for myself. I have a huge collection of about 900 recipe cards I collected when I was 20. Life was simple back then,” Beda said. 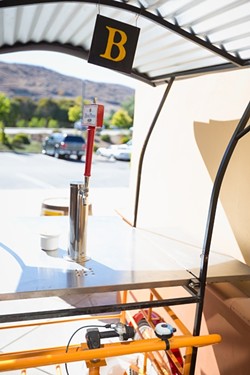 Soon, Beda found a fourth passion that would trump all else: his future wife, Helga, whom he met at business school. The pair soon moved to Helga’s hometown of Düsseldorf, and after honeymooning in Carmel in 1982, set their sights on California. What started as a far-flung retirement dream quickly accelerated into reality.

“Two years later, with our 9-month-old daughter, Julia, a visitor’s visa, and a container full of furniture, we were here,” Beda said. They settled in the Bay Area, where they worked to build a life. In 1987, a chance trip through the Central Coast rerouted the family a little farther south.

“I drove down the grade on a Thursday afternoon in early spring at sunset, and it was green, and I said, ‘Ach du heilige scheiße!’ which is ‘holy shit’ in German,” Beda said with a laugh. “I ended up at Farmers’ Market and thought, ‘Did I just die and go to heaven?’ We had two little kids and Helga liked it, so we moved here.”

Daughters, Anna and Julia, son-in-law Todd Rogers, and their infant grandson have also grown roots in SLO (Julia is a server and manager at Beda’s, Todd works in the kitchen, and Anna helps wherever she’s needed). After 33 years of marriage, Beda and Helga still love working together. From 1966 to 2010, the couple part-owned a children’s book and art punlishing company called Rip Squeak and Friends.

“Ever since we came to the U.S., we’ve never had separate jobs. I think the secret is that we have separate responsibilities,” Beda said. At the restaurant, Beda is certainly the face of the operation (he jokes that his initials read “B.S.” for a reason). Helga helps refine the family recipes and takes care of administrative work, although you can sometimes catch a glimpse of her in the dining room, where she chats with regulars.

Although family is a huge part of the operation, Beda is always quick to include his friends under that umbrella.

“This whole thing came about because of a bunch of friends,” Beda said. “Helga and I lost everything we had in the great recession in 2008. We just had to do whatever it took to survive—everything from construction, to cleaning houses, to throwing parties for friends. We had a nice backyard and friends started coming over and it became a weekly tradition.”

Those friends didn’t just urge Beda and Helga to open their own restaurant—they helped physically build it. Now, those friends are loyal customers.

“We thought, ‘If we have to work this hard for the rest of our lives, we’d better do something we enjoy,’” Beda said.

If the sound of laughter that echoes through the pub on any given day is a sign, the crew is having a grand time. Did I mention you can rent a Beda’s beer bike for your next party complete with taps, glasses, and Beda himself?

Of course, the bike was built thanks to a community effort.

“The group of friends that is responsible for Beda’s has invested money, time, expertise—and without them, this wouldn’t be here,” Beda said. “That’s why I don’t call Beda’s Biergarten a family business. It’s an extended family business.”

Hayley Thomas always recommends a pint of Stiegl Radler. Join her at hthomas@newtimesslo.com.