Beekeeper Jeremy Rose of CBC gets raw on honey, the bee biz, and the fate of his winged essential workers 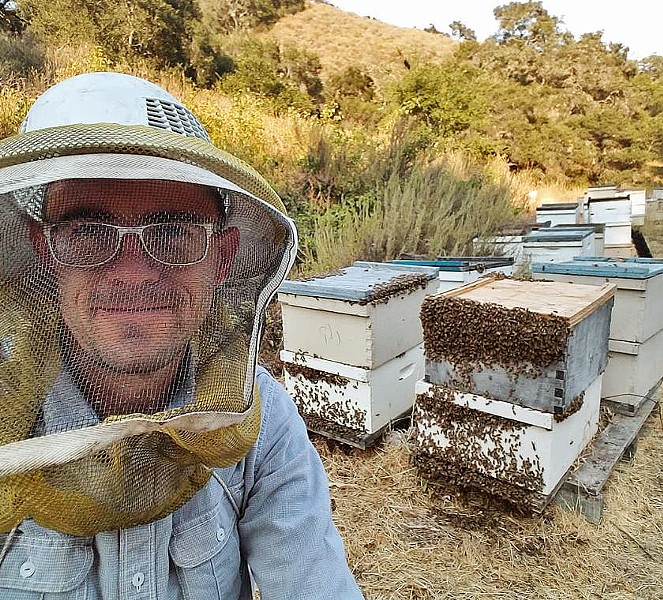 Jeremy Rose's fascination with bees began as a fourth grader. As his classmates ran in fear and his teacher herded the children indoors to avoid bee stings, Rose took pause, felt the impressiveness of the insect energy, and wanted to learn more.

When he witnessed a beekeeper smoke a swarm of bees out of an attic, his childhood curiosity was piqued again. How did he move so many bees with just a little smoke? Rose wanted to be a bee whisperer too.

Rose, who now owns and operates the California Bee Company (CBC) on the Central Coast, grew up in Aromas and planned to go into computer programming while in college at Cal Poly. That was when the world was worried about the apocalyptic bee population declines. At the time, Rose said he suspected colony collapse was the result of a combination of environmental threats, particularly the infestation of the parasitic Varroa mite (aka, Varroa destructor, I kid you not) and the pesticides used in farming.

According to an article in Business Insider, the U.S. Environmental Protection Agency banned a dozen neurotoxic neonicotinoids that were linked to bee deaths. However, there are still 47 neonicotinoid-based products sprayed on fields and orchards on a regular basis, according to the same article.

Personally I've been worried about the bees since that documentary on mysterious colony collapse: Vanishing of the Bees in 2009. Are the bees going to be OK?

The bees are going to be OK, Rose said. Although the Varroa mite is still a problem, and pesticide use still plagues the industry, Rose said he's doing his part to care for his winged friends. Case in point: His company began breeding and selling mite-resistant queen bees in 2011.

"I kind of got into this to make a naturally resistant honeybee that can survive the mites," Rose said

He's been working on this project since he started CBC. To breed healthy bees, he doesn't buy his queen bees from the usual Hawaiian queen bee producers or other places.

"I produce my own queen bees locally," he said. "So I can actually select the healthiest hives in our area."

Which means Rose is essentially improving the locally adapted strength of bees.

The world may have moved on to other disaster scenarios, but Rose has never stopped caring about bees. In college, he decided bees were more worthy of his time than computers. He took a beekeeping class with Cal Poly Horticulture and Crop Sciences lecturer Scott Jeffreys and was hooked. Jeffreys became Rose's mentor, and the pupil left Cal Poly with a fruit science degree. 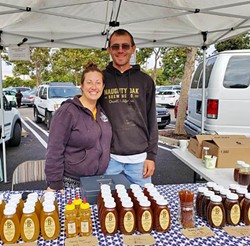 After graduation, Rose co-founded CBC in Santa Maria with his buddy Daniel Nelson in 2005.

Nelson has since moved on. But Rose's wife, Virginia, who he met in college, and their four children—ages 3 to 11—help with the current honey and bee operations. When the farmers' market was still happening in downtown SLO, you could often chat with Jeremy or Virgina while picking out your favorite jars of honey.

Meanwhile, Eric Olson, the owner of Central Coast Distillery, is enjoying his days working with CBC toyon berry and wild sage honey for Olson's honey vodka. The honey vodka idea came about from a grant from the National Honey Board—and Olson, Rose, and a doctor named Patrick Heist from Ferm Solutions in Kentucky are working on a fascinating spirit-making process.

The last time I was at the Atascadero farmers' market, I bought a handful of honey sticks for my kids (the perfect sweet snack) and a jar of pure, unfiltered, unheated wildflower honey for my tea, baking, and smoothies. It's a dark, deep, amber color, and Rose told me that it's one of his favorite batches that he saved from a few years ago. 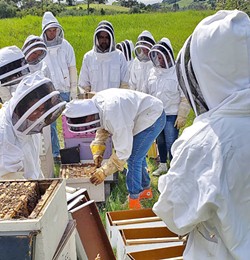 Honey, he said, has good years, like wine has good vintages, and flavors vary from ranch to ranch, from SLO to See Canyon to Arroyo Grande and Creston. CBC promotes the health and well-being of honeybees by using natural management methods. No heating. No processing or adding water or corn syrup.

"Last year was a really good sage honey harvest, and then this year we didn't get hardly any sage," he said, adding that "experiencing the differences" is probably his favorite thing about beekeeping.

When Rose is beekeeping in South County, he only wears the yellow veil. He said there's no need for him to wear the full beekeeping suit he wears for the classes he teaches at Cal Poly with local beekeeper Patrick Frazier. Bees sense fear, and he has no fear of bees. Just a calm appreciation for the insect that sustains life on Earth.

It's not easy to catch up with Rose. He moves his bees at night. When I chatted with him, he was driving back from an artichoke bloom in Manteca, as traveling to set his bee boxes in new locations is one of his favorite things. He said when they settle in, they do a little dance from flower to flower. 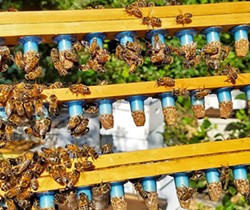 He was nervous about a black bear coming for his hives—one bear can completely destroy a hive in a few bites. This is the time of year when the bears come along after the grass dries up, and they are hungry for something sweet and gooey.

Rose spotted a bear last week and had to drive to each of his hives to check on them. Bears have been spotted in Pozo and Arroyo Grande and even on the Cuesta Grade.

Every time Rose drives by the bear crossing sign on the grade, his 3-year-old son says, "Watch out for bears!" He's probably the only kid around who's actually seen one.

I had fun talking with Rose about the power of honey. It's hygroscopic and antibacterial as a scar deterrent and natural burn cream. What I like most of all about honey is that it's an antioxidant. Rose will tell you that you can find luscious bits of unprocessed pollen in the CBC jars, and if you didn't know already, those are the golden goods that keep away flare-ups of hay fever allergies.

Rose got into the bee biz at arguably one of the most precarious times for bees, and his passion for sustaining the bee population is probably one of the most important actions a person can take. I, for one, am glad Rose chose bees over computers. Δ