Beer and roving in SLO Town

Spend a night with SLO's finest on party patrol 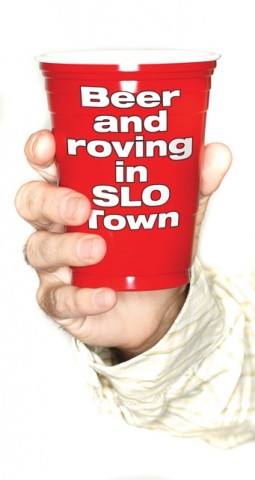 # On any given Friday night in the college ghetto that fans out from Fredricks and Hathaway like a blood, urine, or liquor stain, clumsy coeds line up at cheap kegs and commence with their end-of-week libations.

College partying is a tradition as old as academia, and as compulsory as a pack of cigarettes and lotto ticket purchased on an 18th birthday. But for the current batch of students, the cops are cracking down. Consequences for partying are growing, leaving some to wonder: Is partying in SLO out of control, or is it time to fight for the right?

For SLO Police Sgt. Sean Gillham, the answer is simple. He considers his role in SLO to be the "quality-of-life police," and if revelers are disturbing the peace, they have to be shut down.

It's the tail end of a long, 10-day stretch for Gillham--one with 12-hour days, a bike parade, and a rowdy Halloween stuck in the middle. The department's resources are stretched, and a family emergency has pulled one more officer out of the field. As Gillham points out, this isn't unusual. The department simply doesn't have any extra officers, and managers struggle to retain existing officers tempted by higher pay elsewhere.

Gillham climbs into a black-and-white SUV with a pair of shotguns mounted between the front seats and a touch-screen monitor that keeps track of the action in the center console. He begins his night.

At around 10 p.m., calls from disapproving neighbors upset about noise start to trickle in. The SNAPs--Student Neighborhood Assistance Program members--are deployed in two teams to issue warnings. A second complaint gets police attention. And a $350 fine.

Since Mardi Gras was officially shut down in 2004, the police have stepped up their response to partying, and the cost to violators has risen accordingly: $700 for a second ticket, and $1,000 for each additional violation. Consider it cost recovery for the officers' time. Some property owners have even issued additional fines to renters who receive written warnings or noise violations.

One of the first calls of the evening is to a cream-colored duplex near the train station. They haven't been warned yet, but the night is starting out slow, so Gillham--who's actually a field supervisor, not technically a first-responder--cruises by and finds a pair of college-age people talking on a porch. It's not exactly a raging party, but somebody somewhere is tired of listening to their conversation. Regardless, Gillham drives on.

While the city code states that any noise that extends beyond the property line after 10 p.m. is a violation, the cops are allowed to exercise some discretion. Is a baby crying a violation? An engine starting? A coughing fit? If it's loud enough for your neighbors to hear, and they're bothered enough to call the cops, then yes.

A half hour later, some already-warned addresses are popping back on the screen, so Gillham spins around and heads back to Cal Poly's party central.

"We are reasonable, if we know there's an unreasonable caller," Gillham said. "But honestly, we wouldn't be here if it weren't a problem."

Gillham navigates his SUV through the light crowds that spill off the edges of the sidewalk and comes to an empty street where the noise violation is supposedly coming from. A low murmur can be heard from two blocks away, and Gillham knows instinctively which house it is.

Outside, a throng of girls spots the cops. They take to their cell phones in search of the next party. A cement path leading to the front door cuts through a pair of hedges decorated with empty beer cans and across a patchy dirt lawn littered with red plastic cups. The smell of old beer mingling with new beer hangs around in the corners and nooks and seems to radiate from the young men who come to the door.

The house--and its immediate neighbors--each receive a $350 noise violation. Gillham climbs back into the car, shaking his head.

"This is supposed to be the cream of the crop," he laments.

The next call involves a suspected DUI, and Gillham seems grateful to get out of the Cal Poly area. He doesn't have some vendetta against fun, as many of the busted revelers would believe. In general, he seems to waver between bored amusement and bewildered disdain in regard to the parties. The quality-of-life police dedicate the bulk of their resources to combating parties, but it's ultimately not Gillham's call.

"We don't come unless we're invited," Gillham noted, cruising slowly past several parties. "Are these parties a violation?" he asks, and gestures to a young man hollering from the balcony of a corner house. "Not unless somebody calls to complain."

Dispatch had received a call from a concerned driver who witnessed a 700 series BMW screaming off the freeway and practically onto the curb, but by the time the cops arrive at the fast food destination, the driver is passed out next to the car with his box of fries scattered around him. Officers load him into the patrol car. Back problems are an occupational hazard that will retire many officers early, Gillham says on the way to the next party.

It's hard to tell if these revelers are old enough to drink. Half of the party is milling around the outside of the house--the actual cause of the noise violation--and a couple of guys, all dressed in some variation of jeans, wife-beaters, and Polo shirts, have been involved in some sort of altercation. The house's occupant--referred to alternately by the officers as "Red" or "Purple Dress" (for her hair or outfit, respectively)--addresses the cops.

Meanwhile, one partier is being arrested for an outstanding warrant by another officer--an unpaid littering fine.

Purple Dress teeters back and forth on a pair of black stilettos and begs the officers in a worn-out voice to shut her own party down. Although it's not protocol, the officers oblige, and decide not to give her a $350 ticket. Soon, the remainder of the party leaks out of the house, moving across the lawn like chunky curdled milk. One young man quickly distinguishes himself by heckling the officers. Luckily for him, Gillham's monitor is lighting up with more parties and a report of a busted head.

The man is sitting dazed on a curb when Gillham arrives. Apparently a fight broke out when a passing group called his house the "gayest frat ever"--though it's not a frat house. The guy needs stitches, if not major work for a fractured skull. Whoever caused the injury seems to have split. Nonetheless, officers make a quick search of the area and try to figure out what happened.

By now, it's 1 in the morning, and the calls to shut down out-of-control parties are pouring in faster than SNAPs or the police can keep up. But for Gillham, it's just another six hours till his own weekend starts.