Downtown fear and loathing spurs a petition for more officers; the city council opts for a police plan already in the works

In a sweeping 600-plus-page report, the city of San Luis Obispo recently laid out its major goals and financial plan for the 2013-15 fiscal years, ahead of the budget going before the council for approval in June. 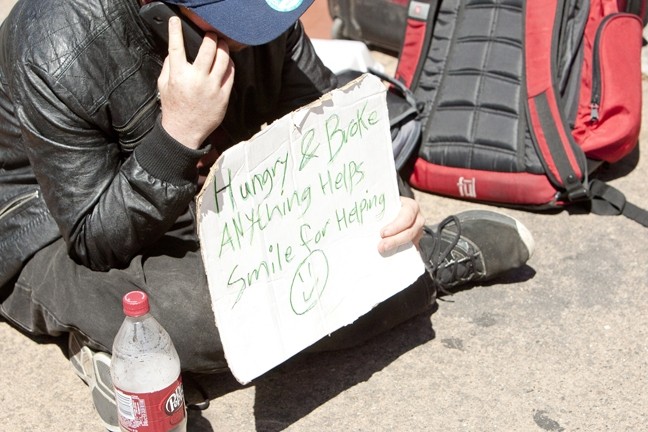 When the council met to discuss the report on April 9, the issue of the day wasn’t staff shortages, nor the city’s plan to finally get the ball rolling on a long-sought skateboarding park. Instead, it was overwhelmingly about downtown safety. Namely, the number of transients making downtown business owners and shoppers squeamish.

The city calls them the “Will Nots”—those members of the local homeless population and the temporary transient residents who, for reasons ranging from mental illness to drug and alcohol abuse, reject services available to them to re-enter society. And according to business owners, downtown shoppers, and even the police department, the number of Will Nots panhandling on downtown sidewalks, drinking in nearby parks, or intimidating residents has grown in recent years and is getting worse.

But how to deal with it depends on who you ask.

Just more than a week prior to the meeting, the Downtown Association, which represents business owners in the city’s downtown core, published a petition on the social justice website Change.org, calling for the city to hire two additional police officers to focus solely on transient panhandling and safety-related issues downtown.

By the time the council convened for its meeting, the petition had pulled in some 600 signatures from people whose complaints ranged from feelings of danger walking downtown streets to lamenting the effects on the local economy to the burden of dodging dog doodie on the sidewalk.

“All the great places I like to take my kids downtown is always full of ‘street kids’, who are smoking and cussing and sometimes appear to be high on drugs,” wrote Atascadero resident Stacy Ball.

“Tired of violent, aggressive, smelly and drugged up people getting far too close for comfort to my family and me,” wrote SLO resident Jason Wiseman.

However, a majority of the comments revealed frustration over “moochers” asking for hand-outs.

“[I] work hard and don’t want to see lazy people degrading my city. [L]et them mooch elsewhere,” wrote SLO resident Joseph Geraghty. “I did volunteer work one X-mas, and the bums got the turkey meat, and I took home a carcass to make soup!”

That dialogue became perhaps the prime concern before the council on April 9.

Prior to the meeting, New Times asked Downtown Association Executive Director Deb Cash if there was any hard data showing that incidences of crime originated with the transient homeless population as opposed to, say, rowdy behavior from drunken bar patrons.

“The observation is they tend to be transient,” Cash told New Times. “I wouldn’t pin it all on them, but the bottom line is what we’ve done is create awareness to [our members’] concerns. We’re just asking, and we’ll see what we get.”

Despite a strong showing of support from the local business community, not everyone was as keen on the idea as the Association members. Members of the group Save Our Downtown, for example, told the council they weren’t so quick to blame the homeless population for problems downtown; they instead contended that many of the problems downtown originate with the bars and rowdy college kids.

“The homeless are an easy scapegoat because they don’t have adequate representation. … It allows one not to face the real problem,” David Brody told the council.

In 2009, the city paid some $20,000 to fund a study that linked incidences necessitating police intervention. The study found a nexus between late-night crime and the city’s many alcohol-serving establishments, and was used as the impetus to enact tougher zoning and permitting regulations for new establishments seeking to open.

According to SLO Police Chief Steve Gesell, there’s no such study singling out homeless or transients as the root cause behind downtown crime, though he noted that about 30 percent of calls for service are related to transient issues.

“We’ve had a very positive relationship [with the DTA] and talked to their board on numerous occasions and we recognize the adverse impacts their members face daily,” Gesell told New Times. “There’s no doubt in my mind that we need to increase the police presence downtown, which has been my objective from day one.”

But how to accomplish that is where Gesell differs from the DTA. The department currently has 57 sworn officers, including 14 supervisors, and already employs three bicycle patrol officers for the downtown from Wednesdays to Saturday evenings. The newly proposed Community Action Team would consist of two officers who would work the downtown beat and work with mental health and social services agencies to try to find long-term solutions for people they regularly contact.

In addition to feet on the ground, the department is looking to install surveillance cameras in the Mission Plaza and the “Globe” near San Luis BBQ on Nipomo Street. Those cameras wouldn’t be regularly monitored by officers, but could be viewed after the fact should an incident occur, much like the Arroyo Grande Police Department recently installed in the Village. The new systems would essentially act as a deterrent to criminal activity, Gesell said.

Instead of hiring the two additional full-time officers for the downtown—which could come to some $280,000 annually, and tie Gesell’s hands in using them outside of their designated area of influence—the CAT program would pay participating officers overtime, which would come to about $120,500 and come in part from grant funding. The department is also looking to start a non-sworn volunteer program similar to those that exist in neighboring communities.

“I’m not going to be disingenuous and say we couldn’t use more resources. We could,” Gesell said. “I’m saying we’re 90 days out from getting the CAT team running, and we would like to see where we get with that.”

In the end, the council opted to stick with Gesell’s plan as laid out in the strategic report, though though members expressed that there may be a need to revisit the idea of hiring additional officers in the future.

“I don’t think we should disregard the plan before it’s had a chance to prove itself,” Mayor Jan Marx said in closing. “I do support more officers downtown, but I think they need to be flexible in case they are needed elsewhere.”

One thing everyone agreed on is that the real task will be creating a new culture downtown, one that makes SLO less attractive to the Will Nots who aren’t interested in supporting themselves.

“That’s what this community needs to focus on changing, but that’s not just a law enforcement issue,” Gesell said. “We can’t arrest ourselves out of this problem.”