Behind the ballot: A deeper look into the upcoming SLO special election that no one wanted

Retired San Luis Obispo City Councilman Dan Carpenter rubbed his head, laced his fingers together, and let out a sigh.

“I really wanted this to end at the end of my council term,” Carpenter said on May 5.

Six months after Carpenter finished his final term on the City Council, he finds himself entangled in a contentious battle with the city he served for more than a decade, stuck in a life he’d rather move on from. 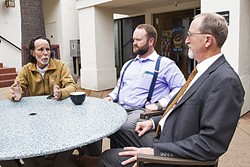 Carpenter is the face of a ballot petition that’s leading SLO into an all-mail special election this summer.

Circulated in the city between August 2016 and February 2017, the petition demanded the Rental Housing Inspection Program (RHIP) be repealed, and that a replacement ordinance titled “non-discrimination in housing” be adopted. It was submitted to the City Clerk’s Office on Feb. 16 with 5,419 signatures—or more than 15 percent of the electorate. That meant the City Council had to adopt it, or immediately call for an election.

But the City Council, of its own accord, voted to repeal the RHIP on March 7. And because the petition had already been submitted, there was no turning back.

When it came in front of the City Council on April 11 for consideration, city officials identified flaws in the “non-discrimination in housing” ordinance. The city argued that the ordinance’s broad language opened the door to legal challenges to other housing policies, like an affordable housing policy. So the council begrudgingly called a special election.

Now, many community members are upset with the petitioners, who are seen as responsible for pushing an election that’s going to cost city taxpayers at least $150,000. Carpenter doesn’t think that’s a fair assessment of what he admits is an unfortunate situation. He said the city didn’t send a clear indication it would abandon the RHIP before the petition was turned in.

“A lot of people are pointing fingers at us,” Carpenter said, “but there was no trust in the councilmembers. The council didn’t listen to the people [by passing the RHIP]. The new council inherited that lack of trust.”

SLO resident Kevin P. Rice came up with the idea to start a petition to fight the RHIP. The libertarian activist often makes headlines for challenging local agencies when they, in his view, overextend their powers. Rice, a renter himself, viewed the RHIP, which mandated interior inspections of rental homes and duplexes in the city, as a particularly overreaching policy.

“To say, ‘I gotta put my trash behind the wall’—that’s annoying,” Rice said. “But to say you’re going to come into my home ... even people who don’t have anything to hide aren’t comfortable with government kicking down your door.”

Last summer, Rice approached Carpenter and local attorney Stew Jenkins to see if they would team up with him. Carpenter was running for SLO County Supervisor and had voted against the RHIP as a councilmember—he was in. Jenkins, also the chair of the SLO County ACLU, won a settlement against the city in a 2013 lawsuit challenging a parking ordinance that was seen as targeting homeless people—he was in as well. Local contractor and city Planning Commissioner Dan Knight also joined the effort.

The quartet was an unlikely group of proponents, but their strengths complemented one another. Rice managed the petition campaign through his political action committee SLO Voice (he raised more than $30,000 for the effort). Carpenter was the political face; Jenkins, the attorney; and Knight, the businessman.

Jenkins said he wrote the language for the replacement ordinance in question. The purpose of the clause, according to Jenkins, is to prevent any City Council from enacting a similar housing policy targeting a specific class of people in the future without voter approval.

The “non-discrimination in housing” ordinance states that the city shall not discriminate against anyone, “based upon age, income, disability, gender, race, ethnicity, sexual identity, or inability or ability to own a home” by imposing any “compulsory program, policy, intrusion, or inspection applicable to any residential dwelling unit.”

City Attorney Christine Dietrick named several current housing policies that the language appeared to come in conflict with, including the policy that forces developers to either build low-income housing units or pay in-lieu fees, a mobile home rent-control ordinance, and accessory dwelling unit regulations, among other programs.

Jenkins discarded those concerns from a legal perspective, and questioned why the city didn’t raise alarms about the language in the six months that the petition was circulating.

“There is not one single concern raised that is true,” Jenkins said. “Passing this initiative is the best way for SLO to be vigilant about preventing overreach by the city.”

After the City Council’s April 11 decision to send the measure to a special election, the petitioners approached individual City Council members to try to convince them of a compromise. If the city would write an alternative measure for the ballot that simply put the RHIP in a voter “lock box”—meaning any proposed RHIP would always go before voters—the petitioners could get behind it.

While the City Council discussed the alternative measure on May 2, they ultimately decided to ditch the idea. Having two ballot measures would make the election even more confusing, the majority argued.

“The more complicated you make it, the more opportunities there are for confusion and people changing their minds,” Councilmember Carlyn Christianson said. “Keeping it simple and very clear is the best way.”

Councilmember Andy Pease was on the other side of the argument, in favor of a compromise ballot measure.

“I think that what the alternative measure brought us was a middle ground,” Pease said. “I would be comfortable with having [the RHIP] be in the hands of the people. Something that was so contentious maybe ought to be decided by the electorate at large.”

The council’s rejection of the petitioners’ proposal soured the dynamic between the two groups yet again. In a May 4 press release, Rice wrote that the city’s refusal to support any ballot measure was a sign that it intended to bring back a program similar to the RHIP. He called it the RHIP 2.0.

Carpenter, battle worn, said he’s still hopeful the City Council will reconsider. The council’s last chance to add its own measure to the election would be on May 16.

“There’s still an opportunity for them to consider it,” Carpenter said.