#Masks frighten people. After all, many are created to scare away evil spirits or invoke power. A collection of masks old and new on display at the Steynberg Gallery demonstrate the rich history of mask making from around the world in an exhibition that both educates and elicits wonder. Many of the masks are positively spellbinding.

Gallery owner Peter Steynberg, who is white, was born in South Africa, where his family goes back eight generations.

"We go back more than 200 years there," he said. "We moved to the U.S. 13 years ago and have been in San Luis Obispo for 12. We're officially African-American."

His love of masks goes back to his African roots, and when he first opened his gallery it featured mainly African art. It still carries a lot of African work, but it's become increasing more of a fine art gallery representing American artists. 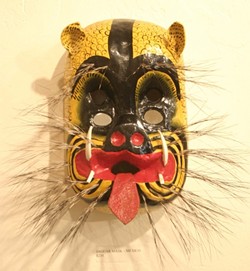 #"We're trying to get away from being pigeonholed as just an African art gallery. For the rest of the year we'll be showing mostly paintings."

Yet Steynberg couldn't resist having this show.

"Basically I started collecting masks years and years ago, and it started getting out of hand. It's very addictive. Eventually I had so many I was put in the position that we had to have this show."

Steynberg decided that instead of displaying the masks by country of origin, it would be more fun to mix them throughout the gallery space. It makes for a lively viewing experience, seeing the juxtaposition of the various cultures. In some cases, the masks are grouped thematically. One group features horned masks.

Steynberg also drew on the collection of his friend Tim Stein, a San Luis Obispo resident who began collecting in the early 1990s but "gained momentum" when Steynberg opened his gallery. Stein knows as well as anyone the potent power and divisiveness of masks: "I've seen people have relationship problems because of masks."

#Many people find masks creepy and have uncontrollable negative associations with them. Whether a fear of masks is rational or not, in most cultures where masks play an important role culturally or ceremonially, people's respect for a mask's power is palpable.

"This one is Ragna, a female image," said Stein, pointing to a fierce-looking visage from Indonesia. "She's like the queen bitch. The priests there imbibe the masks with evil spirits, so before they send the mask to America to a

People's beliefs in masks' potency run deep in places such as Indonesia, Africa, Latin America, and Asia. According to Stein, "In almost all cultures, men do the mask wearing, and then only during certain ceremonies and celebrations. Most of the time the masks are kept in a shed or back room all covered up, only to be removed once a year or once every two years for an event. Then the mask is brought out and worn with great formality.

"But this practice is disappearing," continued Stein. "The Western mind is everywhere now, so there's not the same connotation to masks as there once was. Christianity and Islam has come into mask-wearing cultures and said, â€˜Don't do that. That's pagan.'"

Some mask makers have found a way to incorporate both the history of mask making and Christianity. 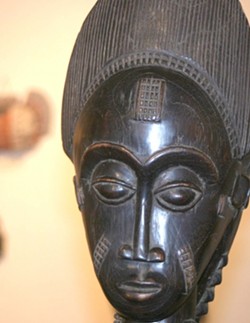 #"I've been collecting [Mexican mask maker] Marcelo Coello's masks for some time now," said Stein. "She's a woman, and woman carvers in Mexico are rare, very rare. She writes prayers into her masks and adheres little symbols in them, and these are Christian prayers. If you're having health problems with your hands, for instance, she'll make a mask with hands on it and prayers for

Many masks on display are quite affordable, as little as $60. But masks can go much,

"They sold $1.5 million in masks in one weekend," finished Stein.

"Belgium is probably the biggest collecting area in the world," said Steynberg. "Because of the Belgian Congo, they have a long history of collecting."

Interestingly enough, as exotic as Stein's collection is, he didn't have to travel the world to acquire it.

"Most of my masks were bought here in San Luis Obispo," Stein revealed. "I think that's what people find most shocking, that most of these were found locally, bought right here in this town."

#In addition to Steynberg's gallery, many home decorating businesses like Daylight Gardens sell masks, as do stores such as Cost Plus World Market and even Ross Dress for Less.

While most of the masks on display were created by anonymous makers in countries from around the world, one local mask maker, Tim Beckwith, also has several masks on display.

"The film was set during Halloween and there was a masked ball at this college," explained Beckwith. "I was hired to make a bunch of skeleton masks. The film was about sexuality, Nazism and racism, black power - all these polarities, and the costume designer was Carol Oditz, a pretty famous designer in the industry. Well, I went to her and told her I had this mask that I thought was right for the film. It's African in inspiration but black on one half and white on the other. She showed it to the director John Singleton and he loved it. Tyra Banks ended up wearing it in the film. Singleton ended up buying the original one, and the one in this show is essentially a copy."

Beckwith's masks were also used in a live performance at the Los Angeles Craft and Folk Art Museum.

"The museum was doing an International Festival of Masks, so I contacted them and told them I was interested in doing something with them," explained Beckwith. "They said they had a stage, so I got some dancers and musicians and started putting something together. I knew I was going to be performing in L.A., and so I wanted to do something colorful and bright. I also knew that I had to be careful of the inspiration for the masks, because if I appropriated someone else's culture I'd be attacked for it - any other ethnicity than my own Irish background." 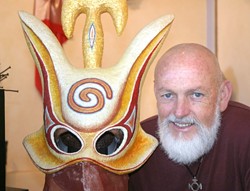 #Beckwith came up with an otherworldly design - something that looked downright alien.

"People actually think they look outer space alien," said Beckwith, "which makes sense considering what I was trying to do."

Whether just looking or considering buying, "Masks of the World" is definitely a show worth seeing.

"What I tell people is this: If you're going to collect masks, get something that really triggers an emotion," said Stein, "because masks are real."

Glen Starkey masks his happiness with a surly demeanor. Try to break his concentration at gstarkey@newtimesslo.com.