Volunteers stay with the dying 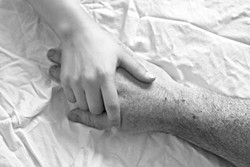 She was dying alone. She had no friends, and her last living relative lived far away and couldn’t get to her hospital bedside in time for her passing. Nurses and doctors came and went, but no one could be bothered to sit with her as she faced her final hours.

In the end, however, she didn’t die alone. People who didn’t know her in life came and sat with her as she faded.

In a sense, the dying woman was lucky. Though some people die surrounded by relatives and friends, many die without any loved ones with them. This solitary world of the dying exists all around us, whether in hospitals, creeks and parks, or in lonely hotel rooms.

And if demographic experts are to be believed, dying alone may become more common. As the baby boomer generation approaches its dotage years, far higher numbers will likely die with no one to comfort them.

In San Luis Obispo, a group has started in the hope that no one will have to face death alone. These volunteers usually come from the ranks of hospice workers, drawing from those who have the strength to handle the emotional trauma of watching someone die and are willing to show up at a hospital at a moment’s notice.

He started the program two years ago, expanding a program charged with helping dying prisoners in the California Men’s Colony, and that model migrated a few years ago to the outside community. Though Hospice SLO offered hospice services, it had never had a set program to help people outside of their program who faced death alone.

“The bulk of our work is counseling, practical support, community education, training, crisis response,” Willey said. “This program is different.”

Willey has collected a group of around 25 people who pledge to be available to maintain a vigil watch with the dying. Volunteers for the vigil program can maintain a 24-hour a day watch divided into four-hour shifts.

“Some of the volunteers would do more than four hours, but they would burn out quicker than they realize,” Willey said.

Doris Goodill is one of the Willey’s veteran vigil volunteers. An elderly woman with a strong and steady presence about her, she’s only been in the program for a little more than a year, but she’s already gone through five vigils.

Goodill was a nurse, and though she’d experienced patients dying, she’d never had the chance to sit next to one at the crucial moment.

“We were always too busy helping patients to be there with them,” Goodill said.

Both Willey and Goodill said the program draws different age groups and personality types. The program’s volunteers have usually dealt with death before; they enter the program prepared for the emotional whirlwind they’ll soon have to experience.

Some people are just meant to do this kind of work, Goodill explained.

“It’s usually black or white,” Goodill said. “They’ll either say, ‘I could never do that,’ while others say, ‘Sure, that sounds interesting.’”

Usually local hospitals call Willey when they feel the program could help someone.

“For the most part, there are set people who refer us: palliative care people, nurses on the floor, or anyone who thinks we could help,” Willey said. “We even had a volunteer who saw someone at the hospital [who could use our services] and mentioned to the hospital people and they called us. ”

Not everyone who uses the program is without family.

“Sometimes people are just tired out or maybe they can’t handle it and just want someone there,” Goodill said.

She added: “Anyone can call us, and we can be there for someone.”

It’s easy to be transported when Goodill talks about her experiences with the dying.

“Sometimes you just start talking to them,” Goodill said, speaking of the gray-haired woman referred to in the beginning of this article. “I asked her what color her hair was before it turned gray, and ‘Did you ever have a dog or cat?’ and ‘Where did you grow up?’ just to maintain contact with her. Though she was comatose and dying, there was a real person there who lived a life. Those questions had real answers in her life.”

Both Willey and Goodill are veterans of many vigils, and when they talk together, it seems there’s a rare wisdom that sprouts from their experiences. They say people who are dying sometimes seem to choose when they die.

“We have an idea in our culture that we don’t have control over when we die,” Willey said. “In my experience, we have a lot more control over our death than I think people give themselves credit for understanding.”

They said they’ve seen people in comas give a sign they’re aware of loved ones, and have seen others hang on until relatives arrive so they can die with them. Others wait days until their caretakers or family members leave for a moment so they can die alone.