You won't be disappointed with this hotel restaurant

It's not easy to find a quality restaurant just anywhere in California's small seaside towns, and rarer yet in a hotel perched on a cliff's edge over the Pacific Ocean. I believe that's because they have a captive audience. My husband Dan and I frequently travel between Mendocino and Santa Barbara, so I share this point after experiencing many disappointments. Even in our former hometown of San Francisco, I'd never recommend restaurants at Fisherman's Wharf it's a tourist trap. The hotels around Union Square, however, are world class. Some of the city's finest restaurants are located in hotels, like Postrio at the Prescott and Michael Mina at the Westin St. Francis. But if you don't know which ones are best, taking a chance often leads to an expensive disappointment. 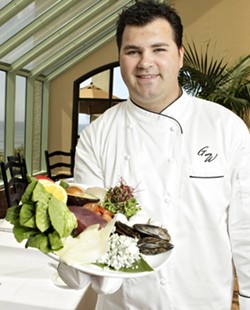 # I'm pleased to report that some hotels in San Luis Obispo and Santa Barbara counties offer fine restaurants: Lido at Dolphin Bay, Bacara, and the Ballard Inn are fabulous. The Cliffs Resort rose to new heights when it remodeled, revamped, and renamed the old dining room last year, which became Marisol, offering modern Latin flavors. I raved about its opening under chef de cuisine Michael Wood and his hot new Latin menu. Unfortunately, he didn't last a year before moving on.

Honestly, I wondered if their Latin-themed restaurant, designed by their creative food and beverage director Pam Treadwell, would survive without the talented Wood. But this was one time when fate wasn't fickle. The Cliff's solid cooking team under executive chef Jose Garcia usually earns a title in the Best of SLO County issue (this year's will be out on May 8) for Sunday brunch. But at dinner, this restaurant performed better with an inspired chef like Wood who created exotic new dishes. Treadwell was earnestly searching for a new chef to replace Wood when, by sheer luck, a chef just happened to show up at Lido next door.

It was chef Gregg Wangard, who was working at the luxurious Loews Hotel in Santa Monica, where his wife Kelly was also a chef. Her parents lived in Paso Robles, so the couple traveled up Highway 5 each month to visit them. Last fall, they changed course and chose a path that would change their lives. Wangard recalled: At the spur of the moment, we changed route and drove up Hwy. 101 after she told me about Shell Beach. We stopped in at Lido and asked chef Evan Treadwell if there were any chefs' positions available in the area. He called Pam and said, Your new chef is sitting in my dining room.'

She ran next door to meet the Wangards, and, after a three-hour discussion during which they toured the Cliffs and Marisol, he accepted the position.

We wanted to live on the Central Coast when we moved here from Wisconsin, he said, but there weren't enough jobs in our caliber.

Among the outstanding tapas and appetizers, Chef Wangard's version of oysters Rockefeller offers succulent Marin oysters with heirloom root crop spinach, chorizo, and hollandaise. The tapas combination, which he describes as Spain on a plate, has Cabrales blue cheese-stuffed dates, piquillo-jam prawns, and grilled Spanish bread. As an aside from the Latin theme, his spectacular presentation of fondue in a gleaming copper pot captures the attention of everyone in the dining room. True to his Wisconsin roots, Wangard seeks out artisan cheesemakers, as he did for this irresistible fondue of Grand Cru Suroix Gruyere and Fontina, served with Fuji apples, Bosc pears, and chunks of rustic ciabatta bread.

Marisol's Latin-themed dining room offers romantic, candlelit dining. Guests can also dine alfresco on the sun-swept patio with front row seats alongside the Pacific's edge. Treadwell's goal of hiring only talented professionals who share her passion goes beyond the chefs.

I look for people who are best suited for their job, she explained. It's about finding people with the right personality.

Treadwell's original goal for Marisol was to raise the level of the cuisine, wine, and service with an elegant yet comfortable ambiance. They've still got some work to do to improve their lunch service, but at dinner, the cooking team and the dining room servers are dialed in. I give kudos to the well-trained servers for their efficient, friendly service and for the fact they're knowledgeable about the menu and wine list. Marisol's fabulous Latin dishes, from the tapas to the entrees and desserts, combined with a great wine list and exemplary service, will fulfill your every expectation for a memorable dining experience.

The personalities in this dining room make it special, Treadwell pointed out.

I had to laugh when I learned that their unaffected chef also created a menu for the hotel's hairy, four-legged guests the Doggie Diner in-room menu. It offers woof woof boeuf, chow hound chicken, and the tree hugger, each order available in small and big doggie sizes. Another of his creative additions at the Cliffs is the pool-deck dining menu. It offers treats like flash fried calamari, the resort burger, and a triple layer PBJ (peanut butter and jam) for the kids. Desserts include a pirate's loot of chocolate truffles, house-made popsicles, and many other sweet treats.

Latin cuisine is the latest rage among food lovers in major cities, and you'll find very tasteful examples of it at Marisol. I frequently recommend this trendy dining room for dinner, explaining that their delicious Latin cuisine isn't like anything we've experienced here before. And they always report back that, despite my enthusiasm, Marisol still surprised them. It was that good.