Ben Riddering's root ball sculptures will be on display at the SLO Museum of Art's Dimensions show through Feb. 18 and at The Phantom Project exhibit (downtown at 959 Higuera St.) through the end of January. For more information about the exhibits and Riddering's work, visit sloma.org and benriddering.com.

In the back left corner of an RV Park in Arroyo Grande stands a hulking, industrial steel box of a building. It doesn't look like much, but inside, woodworker and sculptor Ben Riddering is toiling away to give discarded scraps of wood a second life. The whirring of a chainsaw fills the air. 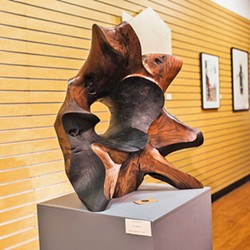 Wearing a brown leather apron, a trucker hat, and jeans, Riddering stands surrounded by gnarled, twisted, and charred chunks of wood that at first glance looked like they were destined for the fireplace. But no, these pieces were lovingly rescued from being trashed just months ago.

A 100-acre walnut farm in Templeton was going through the common practice of rotating crops and uprooting its trees, which were dying and bug-eaten, so the usable parts were milled into lumber and the rest were piled and burned, leaving behind huge hunks of charred tree trunks and root balls. Riddering noticed these piles and was intrigued. Most of Riddering's career is focused on making functional furniture, but the root balls took the woodworker in a more artistic direction.

"They've got these really neat shapes so I just started hauling them," Riddering said.

The finished project looks not unlike something out of a dark fairy tale. Riddering's abstract wood pieces are currently on display at the SLO Museum of Art's Dimensions show and at The Phantom Project pop-up exhibit in downtown SLO.

Riddering starts by chalking out the shapes he already sees happening on a root ball. The pieces are then fleshed out and sculpted. Sometimes these first steps are quick and other times it's a process, like when Riddering crafted the piece Slow Bloom.

"I rejected it," Riddering said. "I hated it. But then I almost completely re-carved the whole thing and now it's one of my favorite pieces."

Once Riddering is happy with the shape of a piece, he re-torches the wood to really give it a lovely, charred and black appearance, and then oils it to seal in his work and give it a nice sheen. So far he's made about 10 pieces that have been displayed in five juried art shows. But he's not stopping anytime soon. That one trip to the walnut orchard in Templeton garnered Riddering enough materials to keep on making root ball sculptures for the next two to three years.

"To him [the farmer] it's waste and he's happy to see it go to a good place," Riddering said. The concept of re-crafting something old isn't new to Riddering, who makes a lot of furniture from barn wood or old, dying trees that needed to be torn down. To repurpose materials is something that's in Riddering's roots. In 1996, he spent six months in Moscow, Russia, training under Kim Whitten, a woodworker who was helping rebuild an orphanage. Once back in California, Riddering worked with furniture maker, John Brigham, who makes a unique line of furniture from salvaged wood.

"I think there's kind of a redemptive feel to the work," Riddering said of his root ball sculptures. "Something that was going to become trash instead becomes beautiful." Δ

Arts Editor Ryah Cooley can't stand eating walnuts but is all about making sculptures from their root balls. Contact her at rcooley@newtimesslo.com.