Beraud goes on the attack in New Times candidate forum 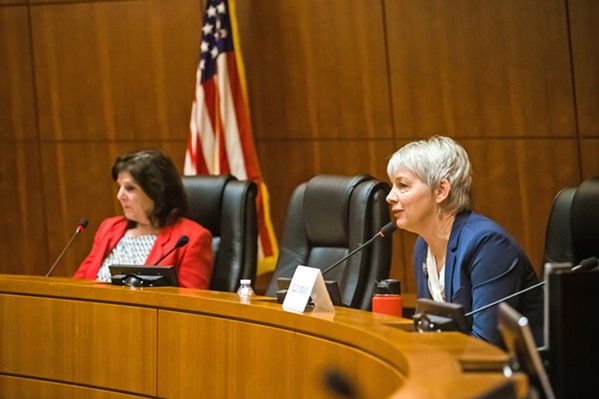 On affordable housing, Arnold voiced her opposition to "inclusionary fees" that are charged to market home builders to fund low-income housing. Arnold argued that deed-restricted affordable housing prevents homes from appreciating in value over time.

"I prefer trying to just zone for and create housing, lessen the fees, [and] provide opportunity for developers to build by-design houses that are affordable to get into," Arnold said.

Beraud, in contrast, said that "we can't build our way out of" unaffordable housing. She expressed support for new revenue measures that could enable the county to support more affordable homes.

The candidates also clashed on cannabis, with Arnold supporting more land-use restrictions on the cannabis industry and Beraud slamming Arnold for turning away economic opportunities.

Arnold, responding to that criticism, called out Beraud for taking a $10,000 campaign donation from a company with ties to local cannabis grower Brett Vapnek, whose firm is facing a civil lawsuit from the state for allegedly operating a processing facility in Nipomo without a license.

On groundwater management and community choice energy, the candidates also clashed. While Arnold said she was "excited and proud" of a recently finished Paso Robles Groundwater Basin sustainability plan, Beraud thought the plan "had a high chance of rejection" from the state.

"I think it was a missed opportunity," Beraud said of the county's stance. "What's to love about PG&E? We have zero voice with PG&E." Δ