With mail-in ballots hitting voters' doors this week ahead of the March 3 primary election, the six candidates for three seats on the San Luis Obispo County Board of Supervisors still have hundreds of thousands of dollars on hand to spend in the waning weeks of their campaigns, according to Jan. 18 finance data.

In a SLO County election season that's drawn $1.1 million since it began, 5th District supervisor candidate Ellen Beraud leads the pack with $295,438 total campaign contributions. The candidate she's seeking to unseat, incumbent Debbie Arnold, has the most money left to spend in the home stretch, $160,516.

Beraud and Arnold's race—which will determine the representative for North County's Atascadero, Santa Margarita, Creston, and parts of Templeton, SLO, and Cal Poly—is the most well-financed of the three, and it could also be the closest. Its political stakes are clear: a victory for Arnold would likely preserve a conservative majority on the Board of Supervisors. A Beraud win would likely flip the board in a new progressive direction.

"If we want to talk about campaign finance reform, she'd be all for contribution limits," Sofranko said. "As long as we're having to deal with this current climate, Ellen's supported by the people who agree with her ideas."

One of the groups throwing its support behind Beraud is getting special attention from the Arnold campaign. An openly pro-cannabis candidate, Beraud is receiving the lion's share of donations from the fledgling industry, which has been critical of Arnold's positions on cannabis.

At a Jan. 22 forum between the candidates hosted by New Times, Arnold called out a $10,000 donation to Beraud from Beachwood Industries LLC—a Los Angeles company whose owner also operates a Nipomo cannabis processing facility that was raided by state authorities in December for licensing issues.

"I have to say, I was really disappointed to see [that]," Arnold said. 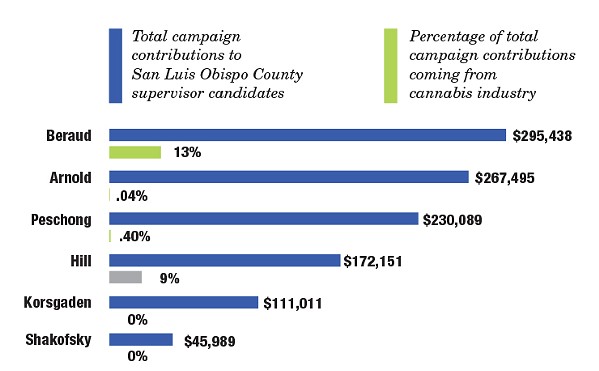 In total, Beraud has received close to $40,000 in contributions from the cannabis industry, according to a New Times analysis, which is more than twice that of the next closest candidate, Hill, who's taken about $15,000 from the industry. The remaining candidates have received virtually no cannabis donations. Peschong has a $1,000 donation from former Lt. Gov. Abel Maldonado, who's active in the hemp industry.

Cannabis donations amount to 13 percent of Beraud's war chest, and 9 percent of Hill's.

Of the cannabis donors who contributed more than $100 to campaigns, Natural Healing Center has been the most active. Its employees and investors have donated about $36,000 to Beraud and Hill. The company's also contributed to two campaign events for Hill.

In response to Arnold's criticism of Beraud's Beachwood Industries donation, Sofranko said its owner's missteps were "unfortunate" but that "by and large they're operating as a legitimate operation."

He argued that Beraud is receiving cannabis donations because of her more welcoming stance to the industry compared to Arnold, who's campaigned on tightening land-use restrictions on cultivation.

"[Ellen] sees it as part of our future and has reasonable policy and a vision on how to incorporate it," Sofranko said.

Correction: This article was edited to correct a description of Beachwood Industries LLC and its connection to a Nipomo cannabis facility. Δ