I know I’m in the right place when I overhear this snippet of conversation from a guy wearing a little black beret: “So you’re based in Ireland? Really? I went over there a couple years ago with Ferlinghetti. There was a poetry reading.”

Namedropping, off-handed references to poetry readings, and black berets? And there’s a woman in lavender knee-high leather boots and a fuchsia leather trench coat. There’re some skintight black leather pants. Lots of European male shoulder bags mixing with guys in cowboy hats and Texas accents. I count four photographers, three videographers, two sound engineers, two wine servers, and maybe 50 attendees, many of whom are no doubt performers and invited guests. Yep, this is it, all right, the Paso Digital Film Festival—the best-kept secret on the Central Coast.

Kelly Kenning and his band are setting up, and since the festival doesn’t serve beer, I head over to the bar for some sparkling wine when I see local photographer Abe Pearlstein, who flags festival organizer Benford Standley over for an introduction. 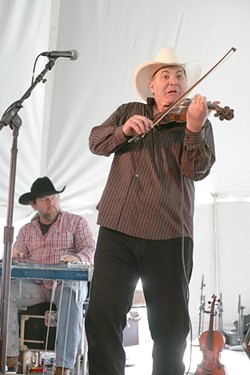 “Nice to meetcha,” says Benford, shoving a couple drink tickets in my hand. “I’ve gotta go put out a fire, but thanks for coming.”

Then Kenny Kenning launches into a set of pure Texas country, singing something about seeing an old flame, but there’s “nothing but smoke” between them now. A quick cowboy-hat-to-band-member ratio is four to six; that’s nearly 70 percent on the Hick-O-Meter!

On a break, Kenny impresses me by thanking the audience members who saw him at Pine Street Saloon the night before, with a special shout-out to “Michelle, our bartender, who was racking them up for us last night.” Gotta love a band who gets on a first-name basis with their bartender after just one night. 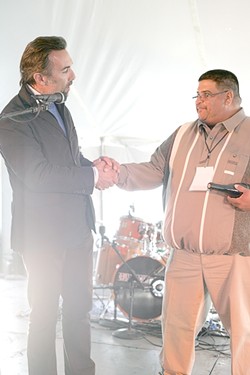 Finally! It’s 2:58 p.m. when I make my first star sighting! It’s Gary Conway, whose first role was as Bob/Teenage Monster, in I Was a Teenage Frankenstein in 1957. I know him best as Capt. Steve Burton, leader of a group of space travelers stranded on …  Land of the Giants, which ran from 1968 to 1970. Conway’s there to receive the Renaissance Man of the Year Award, which seems apt since he’s an actor, writer (American Ninja 2!), director, winemaker, painter, architect, and violinist.

Kenny’s tuning his guitar when he says to the audience, “This is kind of a Chinese song I’m doing right now. It’s called toon-ning.” Hmm. Pretty cheesy, Kenny. Then he’s fixing to play one of his hits, “She Beat the Cheat Out of Me,” but first he has to explain in his faux Mexican accent how he got the idea from one of his friends who calls him vato. The guy’s wife caught him with another woman, so (insert overdone Mexican accent), “She beat the cheat out of me, vato!”

Holy crap, you gotta see the faces Kenny’s fiddler makes when he plays. Go for it, Chisholm Mills, and no, I’m not making that name up. 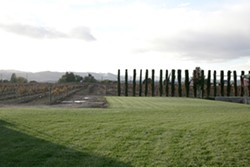 Then Kenny’s singing a song that goes like this: “I really loved that woman till she farted, stunk so bad, that’s when the teardrops started.” He’s from Alice, Texas, if that explains anything. When he finishes his set, he gives a shout-out to “Brother Benford,” which makes me think of Brother Cornel West, and my heart warms a little to think that vaguely racially insensitive white guys from Alice, Texas, use similar phrasing as provocative East Coast public intellectual black guys.

Then I watch as Gary Conway accepts his award, then Anthony Quinn’s kid Francesco (he was in Oliver Stone’s Platoon) gives an award to up-and-coming Hispanic actor Luciano Holguin (Corruption.Gov, Third Degree).

Paula Nelson and the Guilty Pleasures as well as The Kyle Eastwood Band are still slated to perform, but the sun’s going down and I’ve been inside a big white tent a little too long with nary a beer, so I wave goodbye to Le Vigne Winery and ride off into the sunset. I think all those cowboy hats were getting to me.