View a slideshow of the May 28 rally.

There was no violence. He didn’t talk about taking everyone’s guns away. And the crowd wasn’t all speaking Russian or Chinese as they left.

Instead, there were just a lot of people feeling the Bern.

Sen. Bernie Sanders stopped by Santa Maria High School on May 28, where he spoke to a total of 7,512 people about his campaign for president and the issues facing America.

“It looks to me like you want a government that represents all of us, and not just the 1 percent,” he said.

It was the second speech of the three that he gave that day—he was in Santa Barbara that morning and headed for Bakersfield after—but the 74-year-old didn’t hold back, energetically hitting several parts of a long speech. Behind him, both an American and a California flag flew at half-staff, apparently to honor Memorial Day or to ensure that they were well framed behind him for the cameras.

Before his arrival, musical duo Sarah Lee Guthrie and Johnny Irion sang songs of her grandfather Woody Guthrie. While they played, Irion overdramatized his guitar strumming, holding his guitar straight up high while he animatedly picked the guitar’s steel strings—almost like he forgot that people were not, in fact, there to see him. 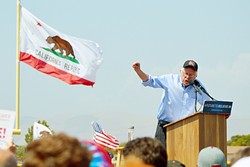 The choice of music—and its appeal to the old, white liberal politics of yesterday—ran the risk of setting a certain tone for the rally. That changed, however, when two local activists addressed the crowd in Spanish and Mixtec, an indigenous language spoken in Oaxaca, Mexico, and by Oaxaqueños living in the Santa Maria Valley.

The two speakers, Esparanza Salazar and Pedro Reyes, spoke about central issues affecting their community, including immigration policy, the treatment of and conditions experienced by farmworkers, limited access to health care, and discrimination and assault against women. Reyes said the search to obtain the American dream has been a struggle.

“This same dream has also turned into a nightmare for millions of families,” he said. “Today, all of us can create a positive change.”

“He gives a voice to the government that I’ve been wanting since I was small,” William said. “You don’t watch change, you are part of change, and that’s what Bernie represents.”

“This is the closest that we get to being part of the political process,” she said. “Had another candidate rolled through, I would have brought them to that as well.”

Carney said he’d go to a Trump rally “just for the appallingness of it.”

Arroyo Grande resident Kimberly Gibson has been volunteering for the campaign.

“I feel like this is the most important election of my lifetime,” said Gibson, who’s in her late 30s.

She said that there were “too many crucial issues at risk” that will be influenced by the next president, citing the need for campaign finance reform, and the pending United States Supreme Court appointment. She pointed to Sanders’ consistency on his key issues.

“I feel like Bernie Sanders is a candidate that has been saying for over 20 years that we need campaign finance reform,” Gibson said. “I think he has a chance, but that window is definitely getting smaller and smaller with every primary election. I feel like it’s really unfortunate that the election is being determined by the special interests and who they are supporting.”

While his critics say he’s taking his campaign too far and risking splitting up the party, Gibson is more concerned with the party’s support and methods used to keep Clinton in the lead.

“I’m really struggling with the fact that the Democratic Party and [Democratic National Committee Chair] Debbie Wasserman Shultz has been forcing Hillary Clinton down our throats,” she said.

Connor Hanft, 16, and Jake Pritchard, 17, came from Los Osos with Hanft’s grandmother. While they won’t be able to vote in this election, they wanted to come to a rally for a presidential candidate. Hanft called Sanders a “really straight forward guy,” and Pritchard, while he said he doesn’t support any candidate including Sanders, said Sanders is “the only one with integrity.”

Hanft said he supports Sanders and wants to see “anybody other than Hillary or Trump” become president.

Eventually Sanders emerged from the Santa Maria High gym, comfortably walking to the stage, and the crowd became overwhelmed by that Bernie feeling. Then it was time for business.

Sanders was quick to call out Donald Trump, the presumptive Republican nominee, for backing out of the Trump-Sanders debate that Trump originally said he’d participate in.

“If we do have a debate, the first thing I’m going to ask him is why he thinks it’s OK to insult Mexicans, and Latinos, and Muslims, and women, and veterans, and African-Americans,” Sanders said. “The greatest strength unparalleled in this country is our diversity. … That gives us our strength, and I don’t know why it’s a goal of Mr. Trump to divide us up. Our goal in this campaign is to bring people together.”

Sanders pleaded for support from California voters in the June 7 primary, saying that winning as many of the state’s 475 delegates as possible will be crucial for Sanders to receive the nomination.

“With your help we are going to win the big majority of [delegates],” he said. “If we get the Democratic nomination, Mr. Trump is going to lose, and lose big.”

“What this campaign is about is getting people to think outside of the box, and outside the status quo,” he said.

He also touched on a primary theme of his campaign—putting Wall Street on the spot.

“To paraphrase what President Lincoln said at Gettysburg, this campaign is a campaign of the people, for the people, by the people,” Sanders said, referring to his fundraising strategy. “We don’t want Wall Street [money]. We don’t represent Wall Street. We’ll stick with the working people.”