I was pedaling home from my typical American day job when the old art sense started tingling. Something was awry. Morro Bay generally sets off my killer trinket-buying instinct and occasionally my finely tuned beach bay-dar, but seldom the art sense. I stashed Black Lightning (my sweet bike) behind a phone booth, ripped off my work shirt to reveal the reporter costume, and leapt over several average-sized buildings in a series of bounds to find myself at the threshold of Fine Art Studios.

I’d biked past the place a hundred times before, but it had always been a warehouse called Central Coast Iron Works. This time, the garage door was wide open to reveal a plethora of paintings and sculptures, many of which featured nude women. Perhaps I’d mistaken my art sense for an entirely different tingling.

Nope. It was art all right, and good art at that. The gallery was kind of a mess, but sculptor Matt Hedlund and painter Glenn Dean were working to clean the joint up and throw an opening shindig sometime soon.

“I’ll be back,” I said, sliding a cool set of shades over my eyes and firing a machine gun into the air. 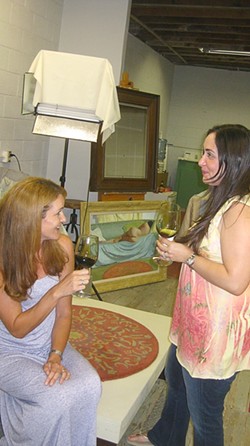 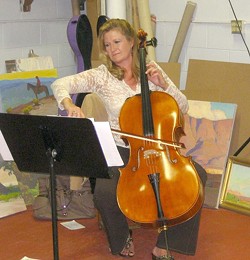 Flash forward to Aug. 13. and the place was jumping with all kinds of cool cats. There was a ton of beer, wine, and delicious snacks, giving the party a decidedly different, younger feel than other art events I’d attended by the bay.

“The iron works job pays the bills, but this is the dream,” Hedlund said. “This used to be a cannery or something, and it’s the perfect spot for us.”

The building has two separate sections of workspace: one on the ground where loading once took place and one in an upper, indoor area where goods were processed. The first is open and dirty, perfect for a sculptor, and the second is enclosed, quiet, and clean like painters love. The two artists have been best friends since the third grade, so the find was almost divine.

“It’s more of a workspace than a gallery,” Dean said. “We’re not sure what we’ll do with it business wise, but we want to share our stuff and have receptions maybe once a year.”

Dean paints quick sketches of landscapes out in the open before bringing the work back to the studio to flesh out in larger, detailed pieces. He said he feels a connection with open spaces and hopes his work can inspire that feeling in others. Hedlund just likes the female form for some reason.

“Put ‘human form’ in the article,” Hedlund said. “That won’t make me sound so bad.”

I didn’t see any dedications to the male form, so I offered to model and rectify the imbalance. Be on the lookout for Flabby Dude with Inadequate Junk at Fine Art Studios in Morro Bay. Call 801-1236 to schedule an appointment. ∆

Calendar Editor Nick Powell now wants you to stop thinking about his naked body. Contact him at npowell@newtimesslo.com.