Concerns over deaths at the SLO County Jail reached a fever pitch in 2018 following the SLO Tribune’s release of footage of the death of Andrew Holland, a mentally ill man who died in the SLO County Jail after he was strapped in a restraint chair for nearly two days. The county withheld the footage after Holland’s Jan. 22, 2017, death. Holland was one of 13 inmates who have died in the jail since 2012. While the FBI is currently investigating possible civil rights abuses at the jail, Parkinson is fighting to keep his job in the upcoming June 5 elections. The Holland family, who received a $5 million settlement from the county last year, is funding Parkinson’s opponent, as well as candidates running against incumbent District Attorney Dan Dow and 4th District SLO County Supervisor Lynn Compton.

runner-up: The SLO County Board of Supervisors

I kind of thought Lynn Compton might win this year, but Adam “Most Annoying Public Official” Hill nabbed his infamous Best Of title again! Hey man, don’t be mad at us. It’s not our fault the residents in this county love to hate you. I know it’s not easy out there. Take it from a piece of office machinery that’s used to it: Laugh it off. You were the butt of my jokes more than usual in 2017, although as of late you’ve been pretty quiet. Wait! Are you on best behavior since that “fuck off” Facebook comment bit you in the buns? I’ll always remember the good times we had, you crafty little minx.


BEST USE OF TAXPAYER MONEY 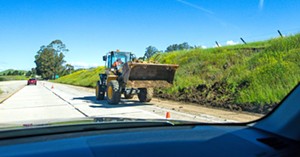 This year, SLO County used residents’ taxpayer dollars to make driving around the county a little less bumpy. Using funds from the state’s SB 1 Road Repair and Accountability Act, the county’s Board of Supervisors approved a number of projects in April 2017 totaling $2.3 million, including paving 6 miles of O’Donovan Road in Creston and Bennett Way in Templeton. The funds will also be used to repave Main Street in Templeton. The county plans to use more than $6.5 million in SB 1 funds to complete 15 miles of paving projects in 2018-19, including rehab of deteriorated roads in Northern SLO County and Oceano.

SLO Mayor Heidi Harmon can tout a perfect record if she seeks re-election this year: She’s two for two in New Times’ Best Elected Official contest! Our readers’ repeat favorite politician says her governing secret is “to listen fully, inspire others to participate, be thoughtful and educated in every decision, and advocate for the needs, desires, and dreams of our community.” Harmon has offered progressive leadership to SLO during tumultuous political times. “There is a lot of passion in this community, and everyone has different ways of expressing that passion,” Harmon noted. “But one common thread is people’s desire to preserve what is special about SLO.”

Whenever there’s an oncoming cold front, he’ll be there. Whenever large convective bands of moisture approach the mainland, he’ll be there. KSBY’s Dave Hovde will be there, posting to Twitter, Facebook, and Instagram, to let you know about it! Locals are a lot more engaged, Hovde said, especially since last year’s wildfire season and the Montecito mudslides in January. “It’s a really big part of the future of what we’re doing in media,” Hovde said. “I still strongly feel there’s a really important role for us to pull things together and add additional content. To be able to engage people, social media is absolutely huge.”

When it comes to finding forever home for dogs and cats in SLO County, Woods Humane Society is the place to go. Woods—which is funded though donations, grants, fundraising events, and fees for services—cares for more than 2,500 cats and dogs at its two facilities. In addition to adoption, Woods offers low-cost spay and neutering. The group’s medical team has performed more than 3,500 spay and neuter surgeries since 2007. Woods also offers an obedience program, called Woods University, and a Humane Education program, which teaches children of all ages how to live humanely and responsibly with their furry friends.


BEST FRIEND TO THE ENVIRONMENT

If the Land Conservancy of SLO County has its way, the Octagon Barn’s doors will be swinging open to the public this summer, and the Bob Jones Trail will be close to starting the long-awaited second leg, from Ontario Avenue to the staging area at the barn. But that’s not all this community nonprofit is working on. There’s also building out the Pismo Preserve parking area and restrooms to open it to the public; enhancing Kathleen’s Canyon Overlook in rural Arroyo Grande; and conserving the agricultural, open character of the Highway 46 West corridor. Want to help? You can donate to the best at lcslo.org.

According SLO County Veterans Service Officer Christopher Lopez, the office promotes and advocates for veterans and their dependents or survivors to the Department of Veterans Affairs and other entities. The office assists veterans in obtaining compensation, health care, and even education and burial benefits. Lopez said the office also conducts community outreach to raise awareness for veterans issues and services. “Through expanded outreach activities, spearheaded by our outreach coordinator, our office has increased the annual number of new veterans assisted for the first time in filing claims by 23 percent, from 1,660 veterans to 2,040 veterans,” Lopez wrote in response to questions from New Times.

SLO County is an awesome place to live. That is if you can actually find a place to live in SLO County. The County is considered to have the 10th least affordable housing market in the country, according to a regional growth forecast released by the San Luis Obispo Council of Governments and Beacon Economics last year. According to their assessment, only 21 percent of family households could afford a median-priced home in the last quarter of 2016. According to previous reporting by New Times, the county would need to build about 5,000 housing units between 2015 and 2020 to keep up with job growth.