Best of 2019: House of Community Watch 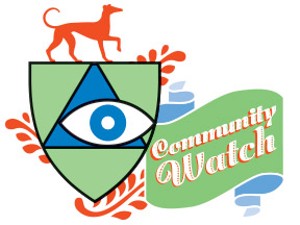 After many consecutive years in the hot seat, I imagine SLO County 3rd District Supervisor Adam Hill is breathing a sigh of relief and is happy to hand over the title to SLO Mayor Heidi Harmon, who people hate because she's a woman, a progressive, she rides a bike, she wants you to ride a bike, she wants to make SLO Town an environmentally sustainable net zero city, she was quoted dropping the f-bomb in Rolling Stone magazine, she's strong (meaning she's too aggressive), she's super earnest, and she kills roses by the truckful. What a monster!

People love SLO Mayor Heidi Harmon because she's a woman, a progressive, she rides a bike, she wants you to ride a bike, she wants to make SLO Town an environmentally sustainable net zero city, she was quoted dropping the f-bomb in Rolling Stone magazine, she's strong (meaning she kicks ass), she's super earnest, and she wears fetching roses in her hair. She also does what she says she'll do, so with Harmon, you get what you see, which is a hardworking, effective leader who happens to ride a bike. What an angel!

Andrew Holland's 2017 death in the SLO County Jail wasn't the first inmate death under Sheriff Ian Parkinson's watch. Holland's was the 10th, and there have been two more since then. Holland, who was mentally ill, died after being held naked and immobile for 46 hours in a restraint chair. His death prompted an ongoing FBI investigation into inmate civil rights and brought to light the woeful lack of mental health care at the jail. The jail has since amended many of its former practices as well as opened a new medical and special programs wing to care for inmates like Holland. There will inevitably be more inmate deaths in our jail, but hopefully those won't be because of abuse and neglect.

Best Use of Taxpayers' Money

Infrastructure, people! That's where it's at! Wanting good roads and bridges is about the only thing that liberals and conservatives can agree on. What they can't agree on is where the money should come from. Gas taxes are supposed to pay for road maintenance, and in 2017, Californians voted for Senate Bill 1, which hiked gas tax by another 12 cents a gallon to a total of 47.7 cents a gallon, on top of the federal tax of 18.4 cent a gallon. Did I mention the 2.25 percent sales tax? If it makes you feel better, Pennsylvania and Washington state have higher gas taxes! In SLO County, the Public Works Department is in charge of maintaining the 1,339 miles of unincorporated roadways. Opinions vary on how well they do their job.

Best Friend to the Environment

In 2018, the Land Conservancy of SLO County was busy. It helped facilitate the protection of the 540-acre Hollister Peak Ranch and 1,779 acres along Highway 46 West known as Hill Ranch from future development; completed a comprehensive plan to guide restoration work and protect the Guadalupe-Niompo Dunes Complex (22,000 acres of sand and scrub in southern SLO County); and continued construction work at Kathleen's Canyon Overlook in Black Lake Canyon, the Octagon Barn Center, and the Pismo Preserve. Kathleen's Canyon Overlook held a grand opening celebration on April 27. You can find out more about events like that one on The Land Conservancy of San Luis Obispo County Facebook page. Want to help them do more? Donate to the environment's best friend at lcslo.org.

No one does more for veterans than the Veterans of Foreign Wars (VFW), according to the national organization's website. Formed more than a century ago by veterans of the Spanish-American War who returned home to find hardly any support, benefits, or services for them, the VFW was instrumental in establishing critical institutions for veterans like the Veterans Administration and the National Cemetery Administration. VFW, now 1.6 million members strong, continues to fight the good fight for our troops, advocating on their behalf in Congress, in local communities, and everywhere in between. Check out the multiple VFW stations in SLO County to learn more about what they do and provide, and how to help.

SLO is one of the most expensive places to live in the country. That's one hell of a badge of honor, guys. It's no wonder I still live in that cardboard box under a bridge by the creek. Meanwhile, all the NIMBYs are pissed off about all of the unnecessary construction, don't want us to build anymore houses in their sliver of paradise, are afraid of this area becoming Los Angeles No. 2 (no thank you!), and bitch about the cost of living all at the same time. Something's gotta give, ladies, gentlemen, and everyone in between. At least the SLO County Board of Supervisors got its shit together enough to pass a new inclusionary housing ordinance (even if it does sunset in three years) that might actually raise some real dollars for affordable housing. Can the county make a dent in the housing crisis before this time next year? I guess we'll find out.