Friday night is an untamable beast

I could blame my new friend Emily Sullivan, a pretty—albeit misguided—22-year-old I met on New Year’s Eve, who foolishly gave me her phone number. She was willing to meet me at Linnaea’s Café when she got off work, but I said no, we’d wait for her at McCarthy’s so she could get a quick drink before we went to Lena’s opening.

Oh yeah, the “we” to which I refer is my noxiously in love friends Steve Myrick and Jen Anthony, whom I could also blame for making me late since they did not protest loudly when we bought yet another round of drinks instead of heading to Linnaea’s Café at the new adjusted time of 7 p.m.

“This new 7:30 p.m. arrival will be even better because by the time we get there people will be loose,” I rationalize. “They’ll have had some wine and will be mingling and chatting and we’ll walk in at the last minute, and it will be a crazy party!”

“Mmmhmm,” they murmur in unison as they suck down margaritas on the rocks—no salt—and look lovingly into each other’s eyes. Blech!

Emily sweeps in, drinks fast, reminds me she’s “almost 23,” and we’re off to Lena’s. I can hardly wait to see the crowd … but WTF? The back room of Linnaea’s is nearly empty.

Lena, looking like a dazzling version of Marlo Thomas from her That Girl! days, stands behind a table with some empty bottles of wine, the kiss of death to any art opening! There’s still some cheese, which I eat, as Emily, Jen, and Steve fan out across the room and gaze lovingly at Lena’s awesome art.

Then Lena, thankful to me for writing up her show, hands me a bag with a bottle of fine Canadian whiskey in it, which I unethically accept, crack open, and pour into plastic glasses for the gang. I skipped the journalism class about not accepting gifts and not drinking on the job. Actually, I skipped journalism school altogether, but that’s probably obvious.

Then Jack Artusio walks in the joint.

It’s been years since I’ve seen him. He’s one of the best realist painters around, a neo-classicist whose fastidious work regularly blew my mind, though he hasn’t been painting much lately, instead spending most of his time as a single father raising his two girls and teaching piano.

We look at “Straight Ahead,” my favorite piece in the show, which features a naked woman in a claw foot bathtub. 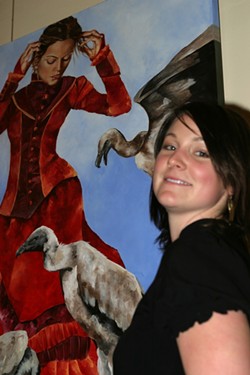 “That’s important information,” he says, giving me the stink eye as I write his comments in my notebook.

Then I sidle over to three people—two guys and a gal—sitting on Linnaea’s little stage, one of whom turns out to be Lena’s husband Travis, who does not punch me in the face, which I appreciate considering how shamelessly I’ve been flirting with his wife.

The woman is Michelle Miller, who’s sitting underneath a painting of a hot chick in a white gown with her leg hiked up on top of a warthog. Turns out Michelle is the model, and no, no actual warthogs were harmed in the making of this painting since that part came out of Lena’s pretty little head (There I go again! Sorry, Travis!). 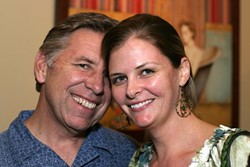 “Why’s your leg hiked up like that?” I ask suggestively, raising one eyebrow and looking deeply into Michelle’s gorgeous eyes.

Then the other guy who’s sitting there, this giant Ken doll-looking behemoth, quips, “That’s one tall-ass warthog.”

He, it turns out, is Michelle’s husband Bill, and he looks like he could fold me up like a card table and slide me under a door.

“I guess I shouldn’t flirt with your wife, eh?” I joke.

I don’t feel that lucky, so we walk across to PK’s album release party at Downtown Brew, but that’s another story.

Glen Starkey takes a beating and keeps on bleating. Contact him at gstarkey@newtimesslo.com