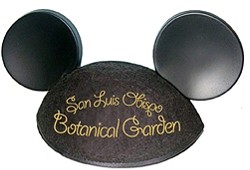 New Times’ coverage of SLO Botanical Garden’s development plans on the Strokes & Plugs page (“Growing green,” Sept. 3) is commendable. In that simple editorial placement, you cut through a mountain of deception that bedazzles people who should know better.

Years ago, when the garden was just an idea, it was sold to community leaders (like me) as a wonderful educational institution serving our community. Its arboretum would also help lock in land conservation as a prime use for the beautiful Valley of the Morros, a signature landscape of our region and a landscape unique in North America, which remains free from commercial development. (Land use in the valley is mainly of two types: government facilities clustered around Camp San Luis Obispo; the rest is agricultural open space
and habitat.)

Locking in land conservation in the Valley of the Morros was on everyone’s mind back when the Botanical Garden was conceived. There was one close call in particular that drove home the importance of protecting it: purchase of agricultural land near Hollister Peak by an out-of-state commercial real estate developer for a motel, restaurant, and golf course.

The community was aghast and aroused. How could that outsider destroy the valley this way? Supervisor elections turned on candidates’ positions on saving the Valley of the Morros. Eventually the developer was sent packing, and today his former land belongs to a conservancy and is managed for habitat and watershed values, freed forever from threat of commercial development.

Concerns about development in the valley continue to this day. For example, though its general plan for years had called for on-campus student housing at Cuesta College to reduce commuting and free up housing in the city, the city of San Luis Obispo recently deleted that
policy, citing concerns over additional development in such a habitat-rich and environmentally precious  area.

Meanwhile, the Botanical Garden, run by local environmentalists and once considered an ally in land conservation, today lays plans to bust open the Valley of the Morros for commercial development. In the article we read the garden will bring us a 3,500-acre “world-class, visitor-serving attraction” with a gondola, zip lines, nine restaurants, and 1.5 million visitors per year. Absent from the story is mention of a 5,000-seat outdoor amphitheater (that’s four to five times the capacity of SLO’s PAC!), the parking lots needed to support such commercial development, and the purported $40 admission charge to this “garden,” a price surely aimed at rich tourists and not at serving locals or any educational purpose.

When all that’s in place, “destination motels” will be close behind: You wouldn’t want 5,000 drunks from a rock concert driving home at midnight on Highway 1, would you?

What does this commercial glitz have to do with the supposed  nonprofit educational purpose of the garden? What does it have to do with preserving the Valley of the Morros? Why, when we were promised an arboretum, do we now hear we’re going to get this sort of extensive commercial development way out in the valley?

I’ve been a supporter of the idea of the botanical garden. But in my opinion, leaders of the garden have lost their way. We were promised a nonprofit community-serving educational institution, but instead we’re getting
a level of commercial development in the Valley of the Morros that dwarfs even the rejected vision of previous capitalist speculators. All of this plays out just beyond the public view—and on public land.

Our community must wake up. The Board of Supervisors, through whose generosity the Botanical Garden uses public land, needs to put its foot down. The board controls the land, and should tell the garden the proposed expansion plan is unacceptable for public land offered for educational purposes. Garden supporters must speak out; contributors and visitors should do the same. The garden needs to be guided back to basics—to providing an educational institution valuable to the community, not a garden-themed Disneyland for tourists.

Anyone interested in learning about plants from the five Mediterranean climate zones—which the Botanical Garden erroneously claims as its exclusive and unique franchise—has a noncommercial alternative that’s already up and running: the Leaning Pine Arboretum at Cal Poly. There you’ll find many acres of beautiful gardens and exotic plantings demonstrating the use of plants from Mediterranean climates. It’s open six days week, it’s educational, and it’s free.

Richard Schmidt is an architect, Cal Poly teacher, and passionate proponent of preserving and restoring our native plant habitats, who’s served on many public boards and committees, including eight years on the SLO City Planning Commission. Contact him via the editor at econnolly@newtimesslo.com.