Seizing life back from the brink of death

What’s the difference between bravery and courage? Bravery, to me, means being willing to put yourself in harm’s way, like enlisting in the Army and becoming part of a security detail guarding a bomb disposal unit. Courage, on the other hand, is being blown to bits but fighting your way back to a kind of normal; it’s putting on a wetsuit and paddling out into the surf with your right arm, the only limb you have left, and turning around and riding a wave in; it’s going on with your life when others would just give up.

“We were just going down the road, pulling security for a bomb disposal unit,” says U.S. Army vet Kevin Trimble, sitting on a big-tired wheelchair on the sands near Cayucos Pier. “They were clearing out a village to get rid of the IEDs [Improvised Explosive Devices] when my buddy stepped on one.

“He didn’t make it and I ended up like this,” he adds, looking down at his missing legs and arm.

“Hey, we need more surfboards with handles,” he says to an approaching surf instructor, making it clear he’s not the least bit interested in my sympathy.

“I put him in his first wave yesterday at Avila,” says instructor Mike Downey. “Just seeing these guys smile … incredible.”

Looking out into the surf, you see courage on display. People hoot and holler as these wounded soldiers paddle into wave after wave, getting to their knees, their prosthetic legs, in some cases doing handstands, and riding the pounding surf in until they fall and get blasted by walls of white water, only to come up grinning and ready for another.

I see an old high school friend, Bingo Farmer, master surf instructor, who seems to be having just as much fun helping these guys as they have learning.

“What I always like to tell people is this: From an instructor’s point of view, helping these guys, I get as much out of it as they do. We end up forming life-long bonds, and we keep in touch,” Bingo says. “I get as much personal growth as they do. They’re impressive.”

Bingo leads me over and introduces me to Martin Pollock, a British triple amputee, who, like Kevin Trimble, has just one limb left—his right arm. In Martin’s case, an IED inside a compound is responsible for his injuries.

“I don’t remember anything [of the explosion],” Martin says, “just a little bit before.” 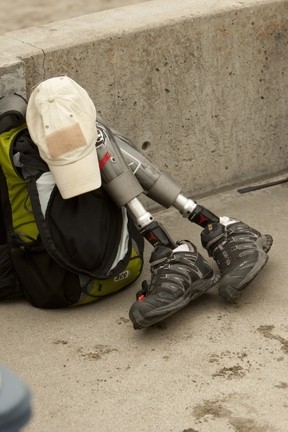 Martin has been on three other of these vet programs, skiing twice in Breckenridge, Colo., and body boarding once in Hawaii. How does he manage getting on a surfboard?

“This arm’s decent length,” he says, lifting his left arm, amputated midway down the humerus, “so I can paddle with it a little bit. Some of the guys like this attach a flipper, but I use it to sit up, so I think a flipper would get in the way.”

Martin really appreciates these rehabilitative programs, mainly for the camaraderie.

“Though it’s good being home with my mates, it helps to be around others who are in the same situation,” he says. “Some are further along [with the rehabilitation] and can inspire me, and others a bit further behind. We show each other what we can still do.”

What is it that keeps them going against these impossible odds, where they’ve abandoned all vanity yet refuse to give into depression and decide to keep going?

“I don’t know what it is,” says Martin, clearly struggling to find the words. “Some can’t do it. I have one lad from my unit in a similar situation, and he doesn’t want to get out of his chair. You just carry on. We had a saying in our country during World War II, ‘Keep calm and carry on.’ That’s all it is.”