Outward Bound, playing in Cambria, raises questions about the afterlife

At the Pewter Plough Playhouse, the opening of Outward Bound, directed by Anita Schwaber, is a study in contrasts. The play takes place entirely in the lounge of a British luxury liner. Its steward, Scrubby, played by George Anderson, is puttering behind the ship’s bar, with the comfortably weary gait of a man who has performed the same activities for decades. Ann (Paige Spiller), a well-dressed, dainty young passenger, wanders into the lounge, looking around with vague confusion. She’s looking for the cabins; Scrubby patiently offers directions. She is bright-eyed and inquisitive; he is old and wise. Anderson’s portrayal of Scrubby is lived-in and natural. But Spiller, through no fault of her own (she’s 13!), seems not yet to have grown into the role of Ann, and she wears the character like a too-large evening gown. 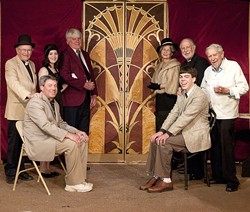 After Ann locates her older brother Henry (played by Spiller’s real-life brother Blake), at whose side she remains throughout most of the play, the two retreat to the cabins, as the rest of the passengers gradually trickle in. Tom Prior (Michael Hanley, thoroughly rising to the occasion) enters next and promptly orders a stiff drink, something he is rarely seen without. Prior has a boyish cheekiness about him, and his spiffy suit is countered by a broad workingman’s accent (which Hanley, fortunately, has mastered). One gets the feeling he wasn’t born into money, but that he has pulled himself up from scrappy beginnings simply by being impertinently clever and disregarding established rules.

But Mrs. Cliveden-Banks (Sharyn Young, excellently cast), who joins him shortly, was clearly born into high society. She is mortified to discover that the boat has but one class, which she must share with dopey, pathetic poor people like Mrs. Midget (a wonderful Janice Peters), and perceived bringers of ill luck such as the Reverend William Duke (Jerry Praver).

We also meet crooked businessman Mr. Lingley (a rather stilted Craig Brooke). An overbearing, loud man, Lingley clashes personalities mightily with Mr. Prior—who, it turns out, worked for Lingley’s company for two days before Lingley “sacked” him. Of course, words like “sacked” never sound quite right in Brooke’s American accent, and neither do expressions like “Have you gone mad?”

(While Outward Bound is a British play, the requisite accents, unfortunately, seem to have been made optional, sort of like extra credit. Some actors deliver perfect affectations; others are clearly trying, like Sean Astin in Lord of the Rings; and still others seem content to talk like they grew up in Milwaukee.)

The passengers thus accounted for, the ship sets sail. But something seems to be missing. It isn’t just that there are very few passengers and only one crewmember, but that no one aboard the vessel seems to recall boarding it, or making reservations, and no one seems to be certain where they are headed. It’s as if they have suffered from collective amnesia. Mr. Prior is the first to notice, or at least the first to comment on, this bizarre wrinkle in the fabric of their reality. His questions (“Do you know where you are going?”) seem to put the other passengers on edge. One gets the feeling that they, too, have noticed something weird, but are all too British to say anything about it. But gradually, the big, empty ship, sailing without lights into the open sea, starts to feel quite eerie indeed. The red velvet covering the walls of the lounge, once so elegant, now reminds us of the lining of a coffin.

Are we dead? Mr. Prior asks this aloud. He is not concerned. After all, death apparently comes with an open bar. But the thought greatly unsettles the others. Scrubby answers their questions politely, if a little cryptically, casually divulging that the ship is headed to heaven—oh, and hell, too, and that each passenger will first face an individual called The Examiner. Lingley calls together a meeting to sort things out.

Here, as in several other places throughout the play, the dialogue seems to turn static, petty, and unnecessary: retracing its steps, wandering in fruitless directions, doubling over on itself. Blah, blah. Everyone has an opinion, except for Henry and Ann, who are suspiciously silent. Is this by design, I wondered, to show the laughable futility of human chatter to decipher, and thus outwit, the inevitable end? Is it just playwright Sutton Vane filling space? Both?

There are more minutes allotted to worried talk about this “examiner” than there are to the Examiner’s actual appearance onstage. Jerry McKinnon’s heartily irreverent performance in this role takes one by surprise, in the same way that the Oracle did in The Matrix: not what anyone was expecting, but then again, what were we expecting?

The final scenes reveal several small, yet significant, twists. There is little, if any, so-called “character development” in this play (indeed, how can a character be expected to develop after death?) but as we learn more about the passengers’ past lives, their personalities slowly take shape in our collective imagination. Some characters seem to become more sympathetic, while others, scarily, turn out to be exactly who we thought they were.

Arts Editor Anna Weltner is, scarily, exactly how you read her. Send comments to aweltner@newtimesslo.com.