The Biden administration's repeal of the controversial Trump-era ban on transgender individuals serving in the U.S. military on Jan. 25 gives many hope, including Central Coast resident Blaine Walters, who has been trying to join the military for the past four years. 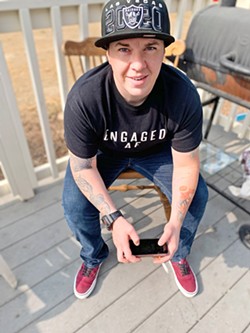 Walters has a family history of service in the U.S. Armed Forces, including his brothers who currently serve in the military and his step-father who served as a Navy Seal. He appreciated the profession and the act of service, however he said he wasn't ready to begin the application process to join the U.S. Army until he knew he was his authentic self.

Walters' gender at birth was female, and as a young adult, he came out to his friends and family as a lesbian.

"I thought, 'This doesn't really feel like who I should be.' And then later on I learned what transgender means and I realized that's it," he said.

Once Walters started noticing the changes with his body and himself, he said he felt competent because he knew this was who he should be.

"My tag for everything is self-made man. Because to me, that's what it is. I've picked my name, I've made the choices to start testosterone, and maybe in the future I'll have top surgery," he said. "So I am self-made and I love it. I absolutely love it."

Shortly after he started hormone therapy four years ago, Walters said, he was ready to apply with the U.S. Army and went to a recruiting center in Paso Robles. Walters is still in the process of completing that application.

According to the U.S. Department of Defense, it released a new policy in 2019 regarding applicants who identified as transgender or individuals with gender dysphoria—the feeling of discomfort or distress that might occur in people whose gender identity differs from their sex assigned at birth.

The policies didn't ban transgender individuals from serving altogether as it had prior to 2016. However, an applicant with a history of medical transition treatment was "presumptively disqualified unless stable for 18 months in preferred gender or biological sex."

A transgender person may serve in the military if he or she does not have a diagnosis or history of gender dysphoria.

Walters had to provide letters from his physician and therapists about his hormone therapy treatment and ensure the letters were written as the recruiting office wanted them. He's had physical and eye exams, lost necessary weight, and provided the office with all the required paperwork.

Last November, he was asked to take another Armed Services Vocational Aptitude Battery (ASVAB) test, as test results expire every two years and he had reached the expiration date. Plus, he needed an updated eye exam. These are the last two components of his application.

Walters said he's had several issues trying to schedule the new ASVAB test, and the nearest testing site is in San Jose.

"To me, it doesn't matter what my gender is when at the end of the day we all wear the same uniform and are fighting for the same cause," Walters said.

The process has been discouraging at times, but Walters said he isn't one to give up, especially when it involves volunteering to provide a service to his country.

He doesn't know whether Biden's military policies will help him specifically, but, either way, he said he's put so much work into this process already. He's not giving up anytime soon. Δ