Paul Irving of Big Big SLO is an idea man. He sees a need and he fills it. That's what he did with his free monthly music listing, and that's what he's doing now with SLO House Party, a new website where over the next five days he'll host more than 50 30- to 45-minute streamed concerts direct from the artists' homes.

Then Irving is going to do it again for the next four days with new bands! Check the online listings for your favorites and tune in. If you like what you hear, there'll be a link to send money, 60 percent of which goes to the band, 20 percent to Irving for organizing and maintaining the website, and the other 20 percent to the tech—probably local musician Vince Cimo—who's recording and streaming the concerts.

"I started by handpicking bands I thought would want to participate," Irving said in a recent phone interview. "It just feels like the music community is going a little stir crazy, and I thought they'd enjoy some good local music with high production values. People can pay whatever they can afford, and they can watch on Facebook Live, Twitch, and YouTube Live, or on the Big Big SLO website. This will be the best concert we can provide before we can go back outside again, and then we'll go back outside, but who knows, there might be applications for this after the quarantine."

It's definitely an idea whose time has come, and after this initial five-day run, if there's a need and more bands want to participate, Irving will keep it going. I watched the test run on Tuesday with Vince Cimo playing, and it looked and sounded great! And speaking of Vince Cimo ...

"Yep! I'll be doing a set on Saturday, April 4, at 9 p.m. [on the SLO House Party], and I'll also be doing an improvised beat making session every day at 10 a.m. for an hour," Cimo said via email. "I'm calling the series Beats Before Breakfast."

Cimo is a member of the Cimo Brothers, Mannequins by Day, and an amazing looper. He layered a bunch of instruments and his voice during the SLO House Party test run. Tune in and support our local music scene! This is going to be good! 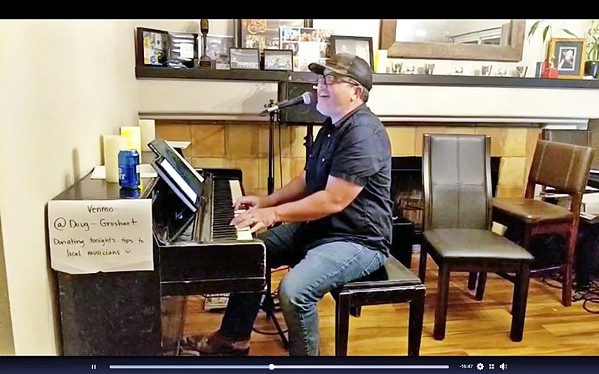 Doug Groshart of the JD Project has been doing independent streaming shows for the last few Friday nights, and he's been getting pretty good tips, but instead of keeping them for himself, he's donated them to others.

"I've been overwhelmed by the outpouring of support," he texted. "I think people are appreciative of the distraction that our little show brings and want to help out people any way they can. We've been able to donate over $3,000 to five local musicians/service industry folks from four shows, so it's been really helpful and so heartwarming. I've also loved that my kids have been interested in joining, so my son has played guitar and [my] daughter has sung. My wife keeps the beers coming and tracks all the requests on dry erase boards. It's been a bright spot for us in a pretty weird time."

Groshart is also participating in the SLO House Party with a show on Thursday, April 2, at 7 p.m., and he'll do his own thing on Friday, April 3, at 5 p.m.

"Probably Saturday too," Groshart said, "but the time is to be determined as I am trying not to step on other live streams' toes, and I think Natalie Haskins is playing from Puffer's from 5 to 6 p.m., so I am thinking 6."

This dude is a class act!

Songs for our time

Two local musicians penned excellent COVID-19 songs and released them this last week. You've got to check out Damon Castillo's "Little Quarantune" on his Facebook page, which goes like this: "Remember when Corona was just a beer?/ When an immigrant was the only thing to fear/ But a Chinese brother had a taste for bat/ Now our fashion sense has gone hazmat// Remember when Corona was just a beer?/ Remember how Corona tastes with a lime?/ Now the whole wide world is running out of time."

It's hilarious and taps into the fears and frustrations we're all besieged by.

Likewise, local singer-songwriter Derek Senn recently released on YouTube a campfire video his wife took of him in their backyard last week singing his song "Quarantine": "Quarantine was fun at first/ We had the day off from work/ Ten days in it ain't so grand/ I'm a non-essential businessman// In quarantine I've lost my shirt/ 'cause it's against the law to work/ I wish it could be over sooner/ The kids are home—there goes the nooner// Quarantine, my hands have never been so clean/ I'm trying to adapt to emerge intact/ We need more money/ That's a no brainer/ I wish I had the cash, not the elliptical trainer/ I used to mock the doomsday prepper for hoarding toilet paper/ but we ran out today so the bathroom sink is now a bidet."

File these two gems in the silver linings folder! 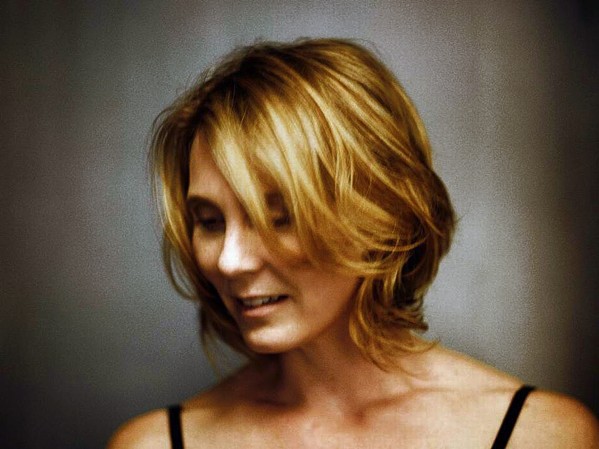 Violinist Brynn Albanese will stream her Tiny Balcony Session #6 "World Music" on Saturday, April 4, at 6 p.m. on her YouTube channel.

"During this time of quarantine, I set up a PayPal link and I have a Venmo handle, and I have asked Facebook friends and people from my concert series to help me any way they can financially," she emailed. It's a rough time because she's lost about $6,000 in gigs and "many of them have been postponed such as the Café Musique farewell concerts."

Vocalist and upright bassist MarciJean Fambrini of MarciJean and the Belmont Kings is joining the SLO House Party on Sunday, April 5, at 1 p.m. "Just me and my bass, though maybe Paul Lewolt if I can talk him into it," she texted, but she's also doing her own streaming event on Saturday, April 4, at 1 p.m. "I'm having a pajama jammie big reveal of my new song titled 'Whisky, she' with the Mother Corn Shuckers." Go to facebook.com/marcijean.fabrini.

"I'm working with Inga Swearingen on a special mini concert broadcast live(ish) from Satellite of Love at 7:15 p.m. Tuesday, April 7," photographer and videographer Barry Goyette texted. "It will be on Facebook Live on Inga's page": facebook.com/ingaswearingen. Inga's got an amazing voice, and with Barry behind the camera, I'm guessing there'll be very high production values! Δ