After six years of planning and a lot of contentious debate, Walmart might be just two meetings away from getting the green light to build a “super center” in north Atascadero at Del Rio Road and El Camino Real. 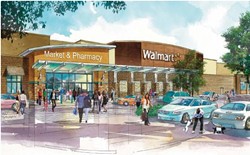 On June 5, the city Planning Commission is scheduled to review and possibly approve the partially recirculated draft environmental impact report (EIR), a general plan amendment to change the properties’ zoning from residential to general commercial, and a specific plan that would include necessary road improvements. During the meeting, the Planning Commission is expected to announce a date when the item will go to the City Council.

“From the outset, this project has created a lot of public interest,” Warren Frace of the Atascadero Planning Department told New Times. “There’s been a lot of passion on both sides of the issue.”

“Walmart will be taking money from the registers of local businesses,” Comar said. “That means they’ll be closing stores, possibly even entire plazas.”

According to the EIR, the project will have significant, unavoidable impacts on air quality and transportation. Single lane Del Rio Road is already in disrepair and can’t currently handle the traffic demand created by a large retail outlet. The report suggests widening the road and adding three roundabouts and a stoplight to help cars move to and from nearby Highway 101.

Walmart will pay $2.2 million in traffic impact fees for one of the roundabouts, but the city will pay $4.5 million for the other two, which Frace said has been a part of the city’s long range plans since 2001.

“[Walmart] should pay 100 percent of the cost,” Comar said. “We wouldn’t need the improvements without them.”

Public comment at recent City Council meetings has been overwhelmingly supportive of the project, with cute kids and teenagers pleading, doe-eyed, for the job opportunities Walmart would provide. According to a city staff report, the project—including the Walmart and adjoining shopping center—would create 507 permanent jobs and net the city $529,637 in annual revenue from sales taxes and fees.