When Just Looking Gallery director Ken McGavin decided to bring something different to the art community in San Luis Obispo about four years ago, he never thought it would change anyone’s life per se. 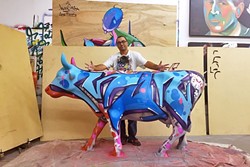 The gallery started carrying the gritty, colorful work of internationally renowned street artist Man One, who has done live spray paint installations for companies like Coca-Cola and bands like The Black Eyed Peas.

“We wanted to introduce something new and cutting edge to the whitest town in America,” McGavin said.

Then, one day a white, blue-eyed, 8-year-old boy with coke-bottle glasses named Dylan Ehmke walked through the gallery doors in downtown SLO and promptly shrieked with excitement.

“He shouts at me, ‘I can’t believe you have Man One’s work here!’” McGavin said.

McGavin couldn’t believe that an 8-year-old from SLO knew who the LA-based street artist was. But Ehmke was super into graffiti work. While the young fan was out of town when Man One came to SLO, McGavin procured an official Man One signed sharpie for Ehmke, who nearly burst into tears upon receiving the gift. 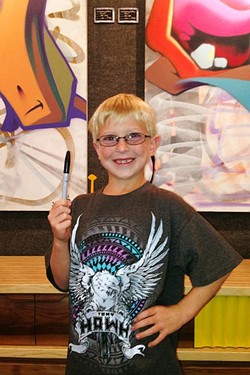 So when Man One agreed to paint a cow during the upcoming Cow Parade—a public art project that moves from city to city around the world each year—on Sept. 17, McGavin knew Ehmke (now 11 years old) had to be involved. So, together, mentor and mentee will spray paint fiberglass cows live. Man One’s will be life-sized and Ehmke’s will be roughly the size of a baby cow.

“I am so excited to meet Man One; I have been looking forward to this for so long and I cannot believe I get to paint right next to him,” Ehmke told McGavin.

All the pretty cows from the event will then be auctioned off, and net proceeds will benefit local charities such as the Land Conservancy of San Luis Obispo, Arts Obispo, and the Heritage Foundation. The cows will be on display for eight months.

Man One is used to kids being interested in his art when they see him creating it, but having such a young fan who had really studied his art came as a surprise.

“It turns out I had a huge fan out there, and it was this little kid who was all about what I had done,” Man One told New Times. “I’ll be able to show him some techniques and tips on the spot [at the Cow Parade].” 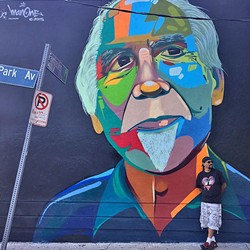 “It all develops on the spot as I’m painting, that’s part of the fun,” he said.

For other young, aspiring artists like Ehmke, Man One has a few words of advice.

“Work hard, learn as much as you can,” Man One said. “Art could become a career or something meaningful that affects people.”