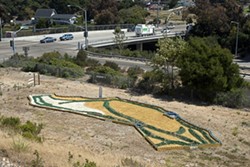 Next to U.S. Highway 101 on Oak Park Boulevard, on a scruffy plot at the junction of Pismo Beach and Arroyo Grande, a self-taught artist is building a rambling topographical map of California, using mounds of colored sand for mountain peaks and cinderblocks to mark the state’s border. Though it’s more than 90 feet long, the whimsical project escapes notice by most drivers as they speed up the adjacent northbound ramp to the freeway.

Green sand hillocks model the state’s contours; pins with colored tops indicate cities and other points of interest. Blue cinderblocks mark the shoreline; unpainted cinderblocks define land borders. A legend distinguishes mountain ranges, urban areas, lakes, deserts, and valleys. A small sign atop a blue cinderblock at the central westernmost edge of the map proclaims “You are here” marked with an X.

The creator is retired high-school teacher, Richard Dunn. He calls his map a work of art.

What possessed him to build it? Prodded by a New Times reporter, Dunn finally had a simple answer. “I could cook up something about the natural beauty of California but that would be bullshit,” he said. “I don’t know where I got the idea: It just came to me, looking at the lay of the land.”

Walking to the map from the dirt parking lot, visitors pass a sign that says “incomplete map-model of California” and “completion prohibited by city planning.”

Dunn claimed that as he was creating his sculptured map, a Pismo Beach planning enforcement officer paid a visit to inspect what he was doing. “He said ‘It’s a sand box and a sandbox is a building and a building needs a permit’,” a disgruntled Dunn muttered. “I said it was a work of art and art doesn’t need a permit.”

He plans to finish; to add wineries, roads, and more details, though he said, “I hesitate to do that not knowing what the city will do.”Richard Cox, the enforcement officer who asked what Dunn was doing has a different take on the encounter. “I asked him if he was going to do anything with the land. He said no,” Cox explained. I said if you were planning something then you would have to develop plans and permits. At that point he threw me off his land.”

Asked whether the city had a problem with what Dunn was building, Cox replied, “At this time, there have been no stop-work orders.”

Cox said the city had no problem with Dunn’s creation but he did point out several concerns: “There seems to be some dirt hauled to the land and that would require a permit. [I’m] not sure if there is proper drainage if it rains. ... There may be some issues with traffic if cars begin to use the entrance. It’s very close to a freeway onramp and Cal Trans might have a problem with that …”

Cox concluded, “Any problem he thinks the city has [with his map] is all in his head.” Dunn has had problems with the city in the past. He had hoped to “do something” with the slice of land under his map but zoning regulations and the close proximity to the freeway ramp prohibit much improvement.

“The less I have to do with the city the better,” Dunn said. “They never wanted me to develop the land.”

According to Scott Gran, a Pismo Beach city planner, Dunn tried to sell the land for years but never could find a buyer. “He tried to drill for water but he couldn’t do that. You can’t have your own well in Pismo and if you did we would have had to cap it.”

Gran said he thinks the map is probably fine—at least until rainy season when he said he would probably send someone out to make sure the paint is not draining into the watershed.

Dunn said he thinks he has finally found a good use for his land, an attraction for schoolchildren and tourists. It’s the perfect spot for the map, he said, roughly halfway between San Francisco and Los Angeles; an ideal place for tourists to stop as they travel between the two great metropolitan areas in the state, conveniently located near the northbound freeway onramp.

Staff Writer Robert A. McDonald can be reached at rmcdonald@newtimesslo.com