Tiësto may be the world's greatest DJ

When Otter Productions, Inc. big cheese Bruce Howard writes to tell me one of his shows offers “something very special for our market,” I know he’s not fooling around. And sure enough, Tiësto is a very big deal. The producer-DJ commands crowds of up to 250,000 on Ipanema Beach in Rio de Janeiro, and he had 25,000 adoring fans see him in Victoria Park in London. He also performed in front of 50,000 at this year’s Coachella Festival.

“Tiësto, a.k.a. Tijs Verwest, is a performer who has transcended musical genres to create a global ‘Tiësto’ brand. His achievements include a Grammy nomination, numerous MTV awards, performing at the opening ceremony of the 2004 Athens Olympic Games, and even a wax statue at Madame Tussauds. With over 7 million followers on Facebook and over 130 million hits on YouTube, Tiësto has truly become a universal phenomenon,” claims his bio. 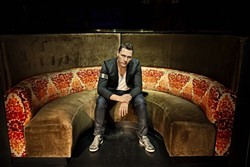 Tiësto performs on Wednesday, Oct. 5, at Avila Beach Resort. Doors open at 5 p.m. Tickets are available at all Vallitix locations including Boo Boo Records and the Mid State Fair Box Ofﬁce; online at vallitix.com, or by phone at 1-888-825-5484. Porter Robinson will open.

“I wanted a fresh new series to reflect my new style, which has been evolving in the clubs for the past few years. It feels great to launch my own series on my new label,” Tiësto says.

You want some rockin’ country? Check out SLO Brew on Thursday, Sept. 29, and see Austin-based outlaws Reckless Kelly (7:30 p.m.; 18-and-older; $15 presale or $17 at the door) with the Bob Lawrence Band opening.

What’s that? You say the Southern American singer-songwriter sound is more your thing? Then head to the Brew on Friday, Sept. 30, for Jason Isbell and The 400 Unit with co-headliner Justin Townes Earle, a Woody Guthrie-esque singer-songwriter with the twang of a honky-tonk hero (7 p.m.; 21-and-older; $20 presale or $22 at the door).

Oh, you want some classic ’70s hard rock? On Saturday, Oct. 1, the Brew hosts High Voltage—A Tribute to ACDC (7:30 p.m.; 21-and-older; $7 presale or $8 at the door), with New Liberty opening. “Thirty-five songs with no breaks, featuring both Bon Scott and Brian Johnson eras,” said Ray Rocha. “Costumes, stage props, a bagpiper (Paul Dunn), and a blow-up sex doll named Rosie. We’re pimpin’ Rosie out, so if ya know anyone ... .” Oh, I know plenty of people!

Did you say punk-edged rock? On Sunday, Oct. 2, From the Top hits the stage (6:30 p.m.; all ages; $8 presale or $10 at the door), with The Story So Far and Heart to Heart opening. By the way, this is also Heart to Heart’s record release party. The Pismo Beach band is signed to Anchor 84 Records.

Steve Key’s songwriters showcases return with a show on Thursday, Sept. 29, at The Porch featuring Christina Bailey (6:30 p.m.; all ages; pass the hat). Bailey is one of four lead singer-songwriters in the female folk super group called Honeymoon. Rob Kimball, host of public radio’s “Pickin’ Up the Tempo,” also performs.

Then on Sunday, Oct. 2, the showcase comes to Sculpterra with a performance by Jenni Alpert (1 p.m.; all ages; pass-the-hat). This L.A.-based “emerging pop songstress” is influenced by Carole King, Aimee Mann, and Rickie Lee Jones.

If you’re a fan of authentic Zydeco music and you’ve never seen Jeffery Broussard & the Creole Cowboys, then get on the phone right now and get tickets for this show on Friday, Sept. 30, when he plays Cal Poly’s Alex and Faye Spanos Theatre.

Broussard is an awesome accordion player and vocalist, and the Zydeco rhythms … well, let me put it this way: If you can stay in your seat you’re a stronger person than I am.

“Music is a gift God gave me,” Broussard says in press materials. “One of the main reasons why I wanted my own band was to play traditional music. I love my music and I love my culture; I am proud and honored to be a part of it. By playing traditional music, that is my way of giving back to my community, to my culture, and to get others interested in the music in other parts of the country and to fulfill my Daddy’s dream.”

The incredibly rustic charmer Don Lampson brings his Americana sounds to Sculpterra on Saturday, Oct. 1, from 1 to 3:30 p.m. for a free concert. Buy some wine, stroll the amazing sculpture garden, and be wowed by a folksy performer with a wide repertoire of engaging songs.

The Red Barn Community Music Series, KCBX Public Radio, and the Live Oak Music Festival present traditional Irish music by The Sweet Set on Saturday, Oct. 1, at the Red Barn at South Bay Community Park in Los Osos at 6 p.m. ($10 at the door; 5 p.m. potluck). Hear everything from fun dance tunes to heartfelt songs from all over Ireland and Scotland.

Check out wall-of-sound guitar-driven rockers VOiD808 when they play Frog and Peach on Saturday, Oct. 1.

The fourth annual Almond Festival (4681 Almond Dr., Templeton) starts at noon on Saturday, Oct. 1, and ends at noon on Sunday, Oct. 2, and in between you can witness the glory of Whiskey Chimp, Big Tweed, Sideshow Preachers, Heather Rae & Tumbleweed, and Geezers on the Loose. A $15 donation is requested; the show is family friendly (kids 12 and under free!). Bring lowback chairs, a dish to share, and beverages. Barbecues are available to use. Overnight camping is welcome. Bring your instruments, as jamming is encouraged. Call 776-3495 for more info.

This just in! “The Salvation Army, which first arrived in the Central Coast in 1891, is re-opening its doors on Oct. 2 to once again be a beacon of hope, and provide food, clothing, and utility assistance to those in need in San Luis Obispo. Youth programs, such as a children’s choir, will also be an integral part of the life at the Corps Community Center located at 815 Islay St. in SLO.” To celebrate, The Salvation Army’s Tustin Ranch Band plays Saturday, Oct. 1, at 4 p.m. in Mitchell Park. Then at 7:30 p.m., the Tustin Ranch Band, along with cellist Sarah Koo and pianist David Dunford, will perform at the First United Methodist Church of Arroyo Grande. Finally, on Sunday, Oct. 2, at 2:30 p.m., Western Territorial Commander of the Salvation Army, Commissioner James Knaggs, and the Tustin Ranch Band, will gather at Grace Church for more musical celebration followed by the grand reopening.

Morro Bay continues its long tradition of music by the bay during the Harbor Festival, Saturday, Oct. 1, and Sunday, Oct. 2, and this year’s biggest act is the amazing Young Dubliners, whose last album Saints and Sinners is still hanging around my CD player more than a year after its release. Get all the festival details at mbhf.com. If you like infectious Celtic-inspired rhythms, rock melodies, and whiskey-stained vocals, don’t miss the Young Dubs at 5:30 p.m. on Saturday! Another notable is Ronnie Montrose on Sunday at 4:40 p.m.

My pal Patrick Hayes just informed me that his band The Dead Volts is releasing its debut recording, a split 7-inch vinyl with the Cross Brothers, on Tuesday, Oct. 4. “We pressed the single on ‘Cocaine White’ vinyl and it looks pretty bitchin’. We pulled Jim Folkrod out of semi-retirement to mix our tracks. Jim mixed my all-time favorite local album, the Muses’ Sinner’s Waltz. We’re also using that date to kick off the tour we’re going on with the Cross Bros., which we have dubbed the ‘Three State Bender’ tour.” See both bands on Tuesday, Oct. 4, at Frog and Peach.

Amazing Surf Adventures is once again welcoming Operation Comfort, when 12 active duty wounded warriors from the Center for the Intrepid/Brooke Army Medical Center in San Antonio, Texas, will come to town for Operation Surf Central Coast. These wounded soldiers will learn to surf over several days, and the multi-day event culminates with a farewell party at Mr. Rick’s with the super group The Onda Matics (onda means “wave” in Italian), at 9 p.m. on Tuesday, Oct. 4.