It's Saturday, Aug. 11, and my wife, Anna, and I are on our bicycles riding toward the new Central Coast Brewing for Hot August Bikes, a fundraising event for Bike SLO County, a nonprofit advocacy group that encourages bicycling. 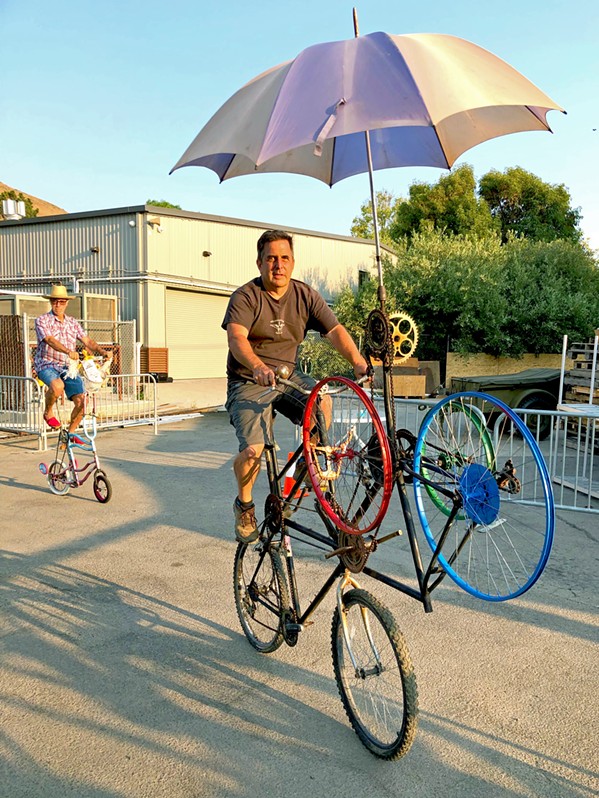 When we pull into the parking lot, we see a whole lot of bikes toward the back of the property, so we ride on and discover a bike valet will park our bikes for free.

We take our valet tag and head to the entrance, where volunteers are collecting a $5 admission fee. The event features a bike show with classic, daily driver, and art bike categories, and admission includes a ticket to vote for your favorite bike as well as a raffle ticket for some cool gift baskets donated by local vendors. Because we rode our bikes, we also get $2 off tickets for our first beer, which we get immediately because it's hot as balls out.

Tucked behind a bunch of storage containers, which create a little corral in back of the brewery, are line after line of bitchin' bicycles, some new, most old, and a lot weird. There are tall bikes, where one frame has been welded onto another; vintage bikes with period-correct customizations; and commuter bikes, the utilitarian sort that people ride every day to work or school.

There's got to be more than 100 people back here, and we see a lot of friends from the bicycling community. Bike SLO County Development and Events Coordinator Emily McBride organized the event, which she says was inspired by one of her group's donors. 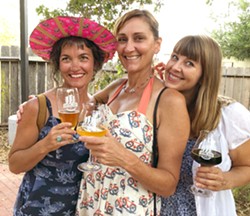 "We had an event at The Libertine downtown and a donor approached me and said, 'All the bikes parked out front are amazing. You should do a bike show where people can come and check out each other's bikes,' which sounded like a great idea," McBride says, "so here we are."

There's a real sense of camaraderie in the air. Bicyclists are definitely a breed apart—inherently environmentalists as a well as fitness buffs—and the Bike SLO County organization is something they can get behind. It goes into schools and teaches bike safety and education; it advocates for better bike infrastructure to make riding safer and easier; and it inspires people to take up the joy of cycling. They also run the Bike Kitchen (860 Pacific St., suite 105, SLO), a maintenance education space that teaches people how to fix their bicycles. They provide the tools and instruction; you do the work, from fixing a flat to truing a wheel or adjusting a derailer.

McBride says she hopes to make Hot August Bikes an annual event, and judging from the turnout, it sounds like a plan. People are drinking CCB's craft beers and eating their delicious pub food, looking at and talking all things bicycle, and soon it's time for the awards and the raffle prizes.

The winners are called up, cheered on, and soon we're all on our bikes and headed out, the call of the open road before us. Ride on! Δ