It’s easy to spot a cyclist. Like a male peacock in the snow, they stick out on the road with their brilliant yellow Lycra, shiny helmets, and whiz-past-you speed. And they should. It’s safer to stick out than to be squashed. But this vision doesn’t define all cyclists.

For years now, the SLO County Bike Coalition, a nonprofit organization dedicated to bettering the bicycle lifestyle, has been trying to change the public’s perception of what biking can look like with an annual fashion show. 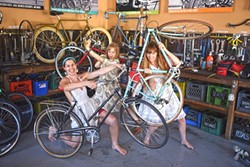 According to Steve Akers, communications director for the coalition, the fashion show began a few years ago just as a small gathering of like-minded friends.

“It had been more of a party before,” he told New Times. “We were doing slideshows, showing how bicycle clothing doesn’t have to be Lycra. We wanted to play a part in changing that. Anything you wear, those are also biking clothes.”

Year after year, the event kept growing. A couple of years ago, it became more organized and more official. And after a brief sabbatical last year, the show is back and bigger and better than before. Headed by Kylie Mendonca, a current New Times staff writer, and a legion of dedicated volunteers, this year’s event will feature 10 designers who’ve handcrafted nearly 45 pieces since December.

“It’s gonna be big,” Mendonca said. “For the show, we’ve divided it in half, between very wearable, wear-for-work fashion. And the second half, we get kind of wild. There are bike inner tubes. It goes full spectrum, from family-friendly cute kids to something freakier.”

If you can think it, these designers have probably made it—from knickers to children’s clothing to summer dresses and accessories. In between the plaids and the linens, you might even find bits of bike parts—rubber, handlebars, and even wheels—amid the more practical items like reflective garb. However, what makes this year stand out is the method behind the material. 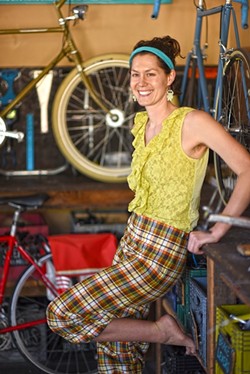 Unlike previous shows, where local boutiques have donated apparel, this year’s collection was made entirely by hand, honoring the DIY aesthetic so often found among cyclists.

For Liz Cordoba, who organized the fashion show two years ago, biking isn’t just a diversion. It’s a way of life. As for many, it’s a cheap, fun way to travel while helping out the environment. Her clothing reflects that, with four pieces made entirely out of recycled clothing, a process otherwise known as “up-cycling.”

“You take something and turn it into something better,” she explained. “They are on-bike/off-bike pieces, not necessarily on a bike for exercise or around town [but] safe and comfortable. I used to commute to work on bike, and it was always a challenge not to look dorky while wearing school clothes. That was the inspiration, trying to figure out that puzzle.”

Now, Cordoba’s started her own business, Cordoba Rhoads, specifically dedicated to biking, sustainability, and eco fashion. Since its invention, the bicycle has been inextricably connected to fashion, a sense of freedom, and the broader fabric of society.

SLO Bike Coalition’s fashion show hopes to emulate that bridge between community and creativity, with volunteers from Salon 544 helping out with hair to catering from Mee Heng Low and a space provided by iFixit.

“You’re a cyclist,” Akers said. “Even if you’re not going 40 miles, you’re going a mile and a half, you’re still a cyclist. We encourage that year round, and we’re excited to take it in a different form, show people that it can be fun, sexy, and glamorous. All those things are possible.”

Jessica Peña likes a bike almost as much as Mike ’n’ Ikes. She’s out of town indefinitely, but you can contact her via interim Arts Editor Hayley Thomas at hthomas@newtimesslo.com.