Morro Bay resident Katie Finley and her three daughters were some of the first bikers to test out the Morro Bay Bike Park at its grand opening on Dec. 26. The park didn’t disappoint.

In fact, the family had so much fun that just the one day of riding didn’t suffice for her 5-year-old, Penelope.

“They didn’t want to leave,” Finley said. “My 5-year-old wanted to go again all by herself.” 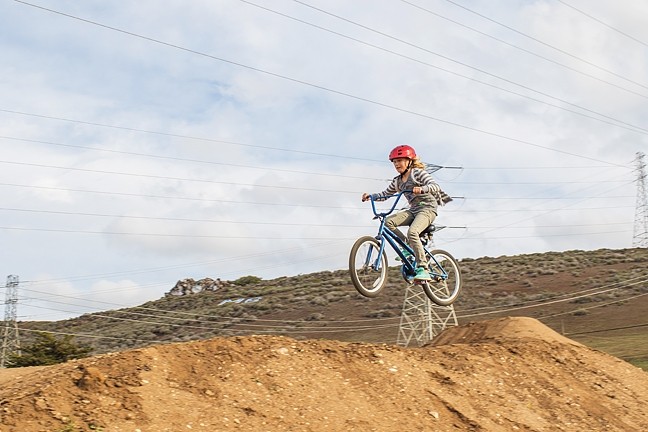 Finley and Penelope returned to the park the very next day, and the two spent five hours there, going up and down the dirt bumps and slopes.

“[The park] has such a neat vibe to it,” Finley said. “My kids have already planned their next trips there.”

Morro Bay Bike Park drew more than 100 riders, of all ages, during its debut weekend. Some riders were beginners, like Penelope and Finley’s other daughter Annabella, 10, while others were more advanced riders, practicing jumps and tricks.

The eclectic crowd at the park played right into what Morro Bay Bike Park Project Manager Bonnie Johnson envisioned for it.

“My main focus from the very beginning was to build it so that anyone who has a bike would be able to find something to ride there,” Johnson said. “I wanted it to be for all types, ages, and skill levels of riders.”

Johnson became inspired by the idea of bringing a bike park to Morro Bay after watching a documentary that showcased bike parks all around the U.S.

She remembered taking her children to the bike park in Morro Bay that closed in 2003, when a private landowner sold the property.

Johnson pitched the idea to the City Council and Parks Department three years ago, and everyone was on board.

“I just wanted to help build something that would get kids out of their house, off video games, away from the TV—give them something to do,” Johnson said.

The new park rests on city-owned land at Main Street and Radcliff Avenue right off Highway 1. The city of Morro Bay waived the permitting fees and provided the fence.

“That was the only city involvement,” said Johnson, who works for the city’s police department. “We’ve done all our own fundraising.”

Johnson still has bills to pay for the park, and is seeking some final donations.

“Construction always costs more than anticipated,” she said. “CCCMB basically lent me $8,000 to finish the costs, but I have to pay them back.”

Come to Pizza Port in Morro Bay for dinner on Tuesday, Jan. 12, where Johnson and the CCCMB are leading a fundraising event from 6 to 9 p.m.

“We’re raffling off a ton of items,” Johnson said. “We have biking gear, a tattoo gift certificate, a window tinting certificate, restaurant gift cards—a little bit of everything.”

In the meantime, bike riders from all over SLO County flock to the new park, which is the only one of its kind in the area.

“I’m finding Atascadero has a much bigger biker community than I realized,” Johnson said. “And there’s a huge biking community here in Morro Bay. … It’s been really well-received.”

Coast National Bank of SLO County was acquired by publicly traded Bank of the Sierra on Jan. 4, at a value of $13.8 million. The outstanding shares of Coast Bancorp will receive $3.2 million in cash and 581,753 shares of stock.