Bikers Against Child Abuse continues supporting victims amid the pandemic

When Santa Maria mother Nancy's daughter, Sarah, was 9 years old, she told her mother something that would immediately turn their worlds upside down: Sarah's paternal grandfather was sexually abusing her. (Nancy and Sarah's names have been changed to protect their anonymity.)

"I was obviously not prepared for that," Nancy said.

Nancy believed her daughter's accusations without hesitation, and called law enforcement. Sarah, in fourth grade at the time, made the police report with her mom. The perpetrator was arrested and jailed, but the horror wasn't over.

"The court process takes a long time," Nancy said. "I think it was actually 17 months ... before we actually went to court."

As the family awaited their date at the Santa Barbara County Courthouse, Nancy said there was one organization in particular that helped Sarah get through the hardest time in her life: Bikers Against Child Abuse (BACA), an international nonprofit organization of motorcyclists with a mission to create a safer environment for abused children. BACA has chapters all over the world, and its Ventura and Atascadero chapters serve victims in Santa Barbara and San Luis Obispo counties. 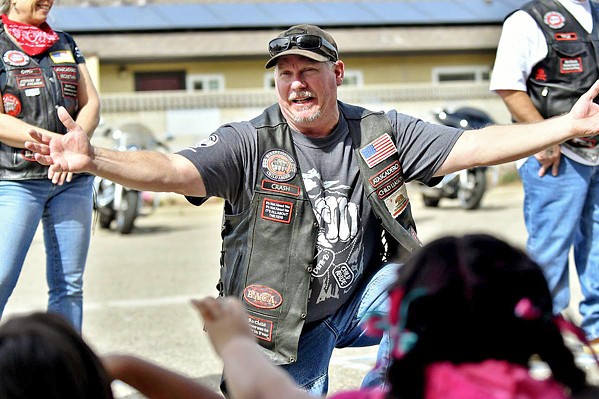 With the COVID-19 pandemic cutting many children off from the teachers, school nurses, and counselors who would typically report suspicions of child abuse, organizations like BACA are more vital than ever, said Ann McCarty, the executive director of the Lompoc-based North County Rape Crisis & Child Protection Center.

"We said from the very beginning [of the pandemic], not having our mandated reporters out in the community, not having our children in schools, there was this overwhelming fear of what was going to be happening," McCarty said. "We knew the abuse was going to continue."

And the abuse, McCarty said, was worse than in the past.

"The level of violence against the children had risen—cases were horrific," she said.

As an agency that serves child abuse victims, the North County Rape Crisis & Child Protection Center can refer children to BACA who need their services.

BACA member Titus, a Santa Barbara County resident who rides with the Ventura chapter and serves as public relations officer, explained that all BACA members only use their "road names"—in his case, Titus—when helping the children.

"Once we as individuals make this commitment to BACA and our kids, we don't take any recognition," Titus said. "Our sole purpose and mission is to support abused children."

BACA services start when an authorized agency with which the abuse victim is already in contact, such as the North County Rape Crisis & Child Protection Center or RISE in SLO County, determines that the child is frightened by their environment. With a client's permission, the agency can refer them to BACA, which contacts the child's family and arranges to meet them in a safe location. After the initial meeting, the child is given the name and phone number of two BACA members who become their primary contacts.

These primaries are there for the child for a variety of possible needs: offering reassurance that they are safe and protected, providing escorts for them if they feel scared, and supporting children at court and parole hearings.

RISE, a SLO County nonprofit that serves victims of intimate partner violence and sexual assault, has referred clients to BACA in the past, RISE Legal Advocate Cat Campos said.

"The clients I've put in contact with BACA have always expressed extreme gratitude for the services their family received from them," Campos said in an email. "Clients have stated that when their child met the bikers, their mood changed from being scared and withdrawn to happy and outgoing. Seeing all the motorcycles and talking with the bikers brought the child out of a fearful state and made the child feel safer knowing that they had a group of 'cool' bikers on their side."

This outcome was certainly true for Sarah, whose mother, Nancy, heard about BACA as a potential resource for her daughter somewhat serendipitously.

"I had a coworker that had a BACA brochure stuck on a pinboard in her office," Nancy said. "When I told her what had happened she said, 'You need this.'"

Nancy got in contact with BACA, and at Sarah's request, she was assigned two female primaries. BACA members played an integral role in making her daughter feel safe, Nancy said, as she dealt with the repercussions of her abuse.

"[Her primaries] would respond if she wanted to call any time, day or night," Nancy said. "They came for her birthday, and they all rolled up and brought cupcakes. They came outside, nothing in the house. It was very good boundaries in terms of, 'We're not coming in, we're not hanging out, we're not going to sit around ... We're here to support this kid.'"

Members also brought Sarah a special BACA vest, and "patched her in," making her a member of the BACA family.

"They told her that she was part of their family now, and she didn't need to be afraid," Nancy said as she held back tears. "It was really amazing to watch these people come ... to take some time to support this little girl that they didn't even know."

When it finally came to the fateful day that Sarah had to read her victim impact statement in court, BACA was there.

One of Sarah's BACA primaries stood with her as she gave her victim impact statement.

"She was so tiny, she couldn't see over the top of the podium," Nancy recalled.

Sarah, now 14 and a freshman in high school, said that BACA's presence in court was vital for her.

"That was something I was really afraid of: I was really afraid of going to face him in court," she said. "[BACA] is a fierce looking group of people. It really made it easier to go in and speak my truth. ... It was an extra sense of protection that I feel like was so great, and that I would love for anybody else in my position to be able to have and experience."

McCarty from the North County Rape Crisis & Child Protection Center said that's exactly what BACA aims to be: a wall of protection.

"They also want these kids to know that their voice matters, and that they believe them," she said.

"RISE will be hosting different virtual events such as a free one-hour workshop open to the public, which will cover how sexual assault is represented in popular culture media, debunk myths and misconceptsions, and give tools for how you can make a difference in your community," Campos said.

For SLO and Santa Barbara county child abuse victims who need it, BACA is there.

"There is nothing in the world that compares to the moment when you see a child, a child that has been through the worst experience in their life, smile and realize that this group of bikers, BACA, is there for them 24/7/365, unconditionally, until they no longer need them," BACA member Titus said. "That's why I do it." Δ