When it came time to move, one Santa Maria resident looked to brains, brawn, and divine inspiration 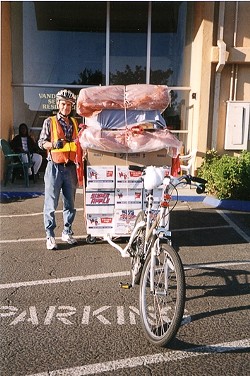 “You can do a lot on a bicycle,” Santa Maria resident James Stoughton said. He spoke with a clear intensity, shifting with ease from intricately detailed descriptions of threads-per-inch on screws and casters’ maximum weight capacity to accounts of how the Lord woke him up at 3 in the morning with the inspiration for his recent achievement.

When it came time for the handyman and quasi-retired mechanical engineer to move himself, his wife, and all their stuff from an apartment in Vandenberg Senior Residence to a new home at Union Plaza, James ignored their Hyundai Santa Fe SUV and turned instead to the 21-speed Schwinn he assembled himself out of the box. He’s very particular about his bicycles—making minute adjustments and using highly sensitive tools to regularly balance the wheels—and he tackled the challenge of a manpower move with an equal fervor.

His September 2008 project took about a month to complete. After the divine wake-up call, he began making trips to local hardware stores to find the perfect nuts and bolts. He designed a hitch, tongue, and wagon that could handle up to 1,000 pounds—though he could only pull 650 pounds while pedaling. The whole rig had to be low to the ground, he explained, but the various parts couldn’t interfere with the bicycle’s brakes or gears.

For the main construction, he bought some cheap PVC pipes and bent them by sitting them on warm asphalt until they were pliable, then pushing and pulling them against a cement wall. James used wood scrap for the wagon, which he outfitted with reworked casters taken from trashed grocery carts. He also built a dolly so low it could slide underneath the whole rig.

With the last bolt in place, he hooked the rolling platform to his newly built bike hitch and started moving the countless heavy items that needed to get from Point A to Point B, more than a dozen blocks away.

“Until you actually do it, you’re not sure if it’s going to work or not,” he said.

The weight pushing down from the wagon lifted the bike’s rear wheel so it spun uselessly unless James’ weight held the treads against the ground. He had to give the bike a rolling start before hopping on and pedaling. He also had to lean as he felt the load shift on slanted streets.

He made 11 trips in all, carrying his maximum weight each time. He moved their mattress and bed frame, their nine-drawer dressers, their oak table. He stacked and balanced boxes of household goods while his wife, Kay, tied on red flags and reflectors as a warning to passing vehicles. Since James made many trips at 10:30 or 11 at night, they affixed flashing lights to the load. Kay rode ahead and scouted for oncoming vehicles. She also meticulously documented the whole process in photographs, from sliding furniture down makeshift plywood ramps on the stairways at Vandenberg Senior Residence to everything unloaded at their new home. James wears the same grim smile in many of the pictures.

“We got it all done and went to celebrate at Red Lobster,” James said.

In a sort of blessed full circle, the wagon now lives at the Stoughtons’ church, Grace Baptist in Santa Maria, where it continues to cart heavy furniture. James wrote a Bible verse on the underside. It’s Philippians 4:13: “I can do all things through Christ who strengthens me.”

Faith plays a big part in the Stoughtons’ lives. James said he bicycled an apartment’s worth of stuff as a testament to the Lord. He also just wanted to show people that it could be done. And, he admitted, he hoped that the move would draw some attention to cycling. James, who cycles so much he once went eight months on one tank of gas in his Saturn, practically waxes poetic about the bountiful bike trails in Portland, Ore.

He’d like to see something similar in this car-clogged region, whether more moving cyclists take to the streets or more locals decide to commute on two wheels instead of four. As James says, there’s a lot you can do on a bicycle. ∆