Being the only single male staff writer here at New Times pretty much means I’m expected to take it on the chin every now and again, to make certain sacrifices in the name of getting the story out and doing what I can to preserve my coworkers’ marital harmony. 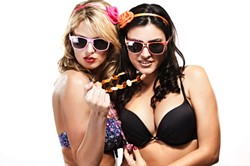 I am often forced to spend hours on end in late-night bars, production sneaks shirtless pictures of me into the paper, Managing Editor Ashley Schwellenbach jabs me in the kidneys because I’m “too easy,” and I get signed up at the last minute to do things like judge SLO Brew’s upcoming bikini and lingerie contest.

And in the words of Hunter S. Thompson, there’s also a negative side.

As our brethren over at SLO Brew were gearing up for their fourth annual Rock the Runway Bikini and Lingerie Contest on Saturday, Aug. 4, there was some 11th-hour confusion over how New Times was going to be represented at this, the single most important local event of the year.

Prolific Art Basher Glen Starkey couldn’t make it—something about
an upcoming wedding—and Staff Writer Nick Powell dared not even breach the subject with his better half lest he wind up short an appendage or two.

But their loss is my gain—and yours, too, my friends! Thanks to a generous invite from SLO Brew owner Todd Newman and General Manager Monte Schaller, I’ll be sitting in as one of a panel of guest judges that includes Jeff Kingman and Jeremy West, from Jeff and Jeremy in the Morning on 93.3 KZOZ FM.

And it’s not all going to be Blue Steel. Come ready to laugh. This isn’t some stuffy bikini contest. Do those even exist?

“It’s going to be very loose, and we always have a great time with the contest,” Monte told me, adding that the M.C. (“probably with a drink in his hand”) and the judges will exchange some jokes, maybe a few jabs at each other, maybe get up and dance with some go-go dancers. “In a sense, it’s kind of half a comedy show, too.”

I’ll go on a limb here and suggest that this may be the most important story I’ve ever been assigned, and I can’t imagine a better way to enjoy the final throes of summer.

Though the organizers have yet to sit me down and tell me specifically what I’m supposed to do and how to judge, Monte told me judges will be tasked with contemplating the categories of poise, personality, physique, crowd interaction, and stage presence.

I’m a personality guy, myself.

And for you lovely ladies still wanting to get in on the fun, it’s not too late! SLO Brew is accepting contestants right up until the event. In order to qualify, you need to submit a short bio and a photo of yourself to info@slobrewingco.com. Contestants must also own a two-piece bikini, a lingerie piece, and of course, be at least 21 years old.

And what do you get for your efforts? The first place winner is going to take home a grand prize of $1,000 cash! Second and third amass $250 and $75, respectively. Righteous bucks!

But no one’s going to leave empty-handed. Our friends over at Hep Kat are offering free hair and makeup services the day of the event, and everybody participating is going to go home with a gift bag chock-full of hip swag. There’s some talk going around of additional prizes, but I’ve got to leave some things to the imagination.

So come join me for the festivities. Buy me a drink. Compliment my new shoes. Offer up your views on contemporary international trade policy. I think you’ll find that even though I’m an über-important judge at a bikini competition, I’m a real person just like yourself.

If you can’t make it, check next week’s Art Bash to see what you missed.

And contestants: I plan to grade on a curve. Or two. Boo-yah!