Bill & Ted Face the Music is good for a few laughs

Dean Parisot (Home Fries, Galaxy Quest) directs this third installment in the Bill & Ted buddy-comedy-sci-fi series about two metalhead slackers—Bill S. Preston Esq. (Alex Winter) and Ted Theodore Logan (Keanu Reeves)—who travel through time in the first two films. Idiotic teenagers in the 1989 original, Bill & Ted's Excellent Adventure, they're now middle-aged adults with daughters, and they come to the realization that they've yet to create the music that will inspire the utopian future that set off their original adventure. (88 min.) 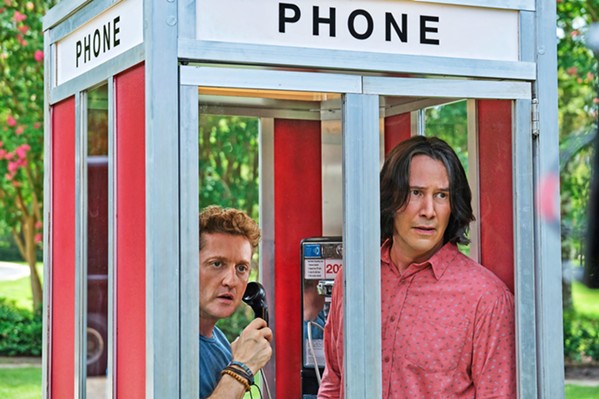 Glen I may have come into this film with both dreams of wistful nostalgia and unreasonable expectations. After all, the premise is pretty ridiculous. In the first installment, the bros were at risk of flunking out of high school, so "the future" sent Rufus (George Carlin) back in time to help them learn history from the people who make it, like Napoleon, Freud, and "So-crates." You see, the people of the future told Bill and Ted that their band Wyld Stallyns would someday create music that would unite the world and usher in a utopian society. Instead, the band has fallen apart and the friends are playing near-empty gigs at a Moose Lodge. They're still married to Joanna (Jayma Mays) and Elizabeth (Erinn Hayes), the medieval princesses they met in the first film, but their ladies aren't too happy with them, dragging them to couples therapy. About the only people who still believe in them are their daughters, Thea (Samara Weaving) and Billie (Brigitte Lundy-Paine), apples who didn't fall far from their fathers' trees. This time around, "the future" sends Rufus' daughter Kelly (Kristen Schaal) to inform the boys they have 77 minutes to write their world-uniting song before space, time, and reality itself collapses. The pals jump in Rufus' old phone booth and begin jumping into the future to find themselves after they've already written the song so they can bring it back to the present and write it. Makes sense, right? Right?

Anna It's definitely a film built on the nostalgia of its earlier counterparts, the first of which became a cult classic and was a truly fun ride, the second of which was not as great but pretty inevitable given the success of the first. This time around the two knuckleheads are still their old selves, just a bit older and more washed up. Storywise, the whole film is set up as a countdown—the two have just a couple of hours to get their epic, world-uniting song together. Their leaps into the future soon reveal that if they don't get their act together, they'll lose their dear wives as well as rain doom upon the rest of humanity. It's a silly romp, and perhaps not a laugh-out-loud ride, but a chuckle-inducing and eye-rolling adventure. Should I have popped an edible or two beforehand to help the experience along? Probably. Nevertheless, it's fun to see these two reprise their roles as idiot heroes with the added twist of their two daughters along for the adventure.

Glen The best laughs come from Dennis Caleb McCoy (Anthony Carrigan), a poorly functioning robot sent to kill Bill and Ted. Dennis is named after one of Kelly's loser ex-boyfriends by her mom, The Great Leader (Holland Taylor), who hopes killing Bill and Ted will reverse the reality collapse. The other laugh inducer is William Sadler, who reprises his roll as Death, who Bill and Ted outsmarted in an earlier film. Death is despondent that they kicked him out of Wyld Stallyns because of his 40-minute bass solos. If you've seen the trailer, you know Thea and Billie try to help their dads by fetching from the past and enlisting Jimi Hendrix (DazMann Still), Louis Armstrong (Jeremiah Craft), Mozart (Daniel Dorr), and others to join their dads' band. It all culminates in chaos as time and space destabilize, but this is a feel-good comedy, so you know the outcome is never in doubt. It currently costs $19.99 to on-demand stream. That's too much. Wait for it to come to Redbox for $1.75.

Anna I agree, this one is a better value at a lower price point. It's a quick hour-and-a-half flick, so the silliness doesn't get bogged down too badly. Dennis is definitely a welcome bit of comedy; there's only so much that rehashing the roles of Bill and Ted can do to keep things interesting. They travel to hell after Dennis lasers them out of existence, and while Bill and Ted get sidetracked by trying to fix their own futures, Thea and Billie are on a mission to put the band together. It's a bunch of nonsense, but it's not the worst nonsense I've seen. If you don't mind putting your brain on hold for a bit and letting a little ridiculousness into your headspace, this may be a fun 90 minutes, but I probably won't be revisiting this one. If anything, I'll go back and watch the first film for that dose of nostalgia. Δ