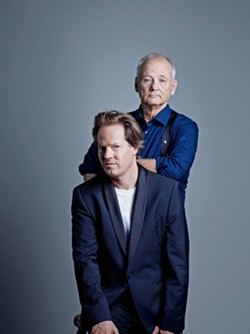 "Do you want to interview Bill Murray?" my editor asked.

"You also have to interview Jan Vogler, the cellist."

Then came the arrangements and figuring out of availability. Then the terrible message: "Turns out Bill and Jan won't be together until 10/5, so the duo interview is not available, nor is Bill Murray for a solo chat."

Wahhhhh! I knew it was too good to be true, but I went for the Jan Vogler interview anyway, because he's appearing with Murray at the Performing Arts Center next Sunday, Oct. 8 (7 p.m.; all ages; $60 to $175 at 756-4849 or calpolyarts.org), as part of Bill Murray with Jan Vogler and Friends, an evening "showcasing core American values in literature and music."

Murray is the comic genius behind classic films such as Meatballs, Caddyshack, Stripes, Ghostbusters, Scrooged, Groundhog Day, and The Life Aquatic with Steve Zissou, a guy who proved he has serious acting chops in films such as The Razor's Edge, Rushmore, The Royal Tenenbaums, Lost in Translation, Broken Flowers, Hyde Park on Hudson, The Monuments Men, and St. Vincent. He's demonstrated his singing prowess in his 2015 Christmas special A Very Murray Christmas and as the voice of Baloo in last year's The Jungle Book.

The man is an unmitigated legend, a guy who famously doesn't have an agent, a jokester who will pop up unexpectedly and steal people's french fries, looking them square in the eye and saying, "No one will ever believe you."

That's one of the reasons his fanbase is obsessively nuts about Murray.

"If there's a situation, real life, that's not being photographed or documented, it's great," Bill said in an interview about his offstage antics. "I really like to jump in and be a child or an adolescent or really any age. There's nothing better than stealing someone's piping hot french fry. I mean, that's living. They're free and they're right there! They're just bonus potatoes."

When I was informed Murray wouldn't be available but that I could quote from him in earlier interviews provided, I figured why not? I called Jan (pronounced Yon) Vogler in New York, and when who I presume was his classic violinist wife Mira Wang answered the phone, I could hear him practicing in the background. Jan isn't as mainstream famous as Bill, but in the world of classical music, he's a giant. The German-born musician won the principal cello position of the Staatskapelle Dresden at age 20, making him the youngest concertmaster in the history of the orchestra. He's played with every major orchestra you can think of, from the New York Philharmonic to the Vienna Symphony Orchestra.

"So basically we met on an encounter in an airplane flying from Berlin to New York," Jan explained. "Bill was coming back from doing The Monuments Men.

"I saw this character carrying this sort of oversized suitcase, and I said, 'Are you going to be able to fit that thing into the overhead compartment?' And he looked at me like I was brain dead and said, 'It has its own seat,'" Murray recalled. "'And not only does it have its own seat, it has the window seat. It's a Stradivarius cello.'"

"We became friends," Vogler said, "and he visited me at a concert, and I joined him at a movie premiere, and then he invited me to The Poetry Walk, where people walk from Manhattan to Brooklyn across the Brooklyn Bridge and listen to poetry about New York City. It was fantastic, and we started talking about a collaboration."

Vogler, who grew up in East Berlin, benefitted from his father's extensive collection of American literature, translated into German, of course. He read the complete Hemingway, Whitman, Twain, and more, and the pair conceived the idea of an evening of music and literature.

The program includes some classic material such as Johann Sebastian Bach's "Prelude" from "Cello Suite No. 1 in G Major, BWV 1007," intermixed with Murray reading selections from Walt Whitman's "Song of the Open Road" and "Song of Myself," Mark Twain's Huckleberry Finn, and Ernest Hemingway's "With Pascin at the Dome" from A Moveable Feast.

Murray also sings songs like Stephen Foster's "Jeanie with the Light Brown Hair," George Gershwin's "It Ain't Necessarily So" from Porgy and Bess, and a Leonard Bernstein West Side Story medley with "Somewhere," "I Feel Pretty," and "America."

I've seen a bit of it online, and it's charming and poignant and a wonder to behold. Murray clearly has a lot of fun with it.

"People in the hotel room next door know that I can sing because I take long showers, long committed showers," Murray joked. "I think people are surprised I have a voice left because usually when you become powerful and muscular and mature like this your voice is already tired out, but I haven't done much with it because I get a lot of rest."

"It is an incredibly joyous program," Vogler said. "I do my regular classic work with great pleasure as I'm sure Bill does his movies with great pleasure, but this is different for both of us. There's no sense of competition, and it was born out of our shared interest in American music and literature. It's really great fun, and it inspires us all."

"He's really great. He's a fantastic cellist," Murray gushed. "His wife Mira Wang is an extraordinary violinist, and our friend Vanessa Perez is a, you know, big deal piano player. It's such a powerhouse trio that being the singer-speaker guy is a piece of cake. I'm waterskiing behind these people, just kind of hanging on."

A free pre-show lecture will be held in the Philips Lecture Hall, adjacent to the Performing Arts Center, beginning at 6 p.m. and led by KCBX host Fred Friedman.

Also at the Performing Arts Center, you can see multi-platinum-selling singer, performer, and songwriter Gavin DeGraw in concert on Wednesday, Oct. 4, in a show presented by Cal Poly Arts and Otter Productions Inc. (7:30 p.m.; all ages; $40 to $70 at 756-4849 or calpolyarts.org).

The show is part of DeGraw's "Raw Tour, "where he'll be performing a stripped-down set, diving deep into his catalog for the first time in his career," according to press materials.

His debut album was 2003's Chariot, a million-plus seller than yielded singles such as, "I Don't Want To Be," "Follow Through," and the title-track, "Chariot." Subsequent albums generated singles like, "In Love With A Girl," "We Belong Together," "Not Over You," the Grammy-nominated, "We Both Know," and, "She Sets the City on Fire."

The good news is there are still tickets for country act The Josh Abbott Band at the Fremont Theater this Saturday, Sept. 30 (7 p.m.; all ages; $25 presale at ticketfly.com or $25 at the door). The bad news is the Big Bad Voodoo Daddy show on Saturday, Sept. 30, at Presqu'ile Winery is sold-out. Let's not dwell on it.

Abbott's riding high on his excellent fifth album, Until My Voice Goes Out, which climbed to No. 6 on the U.S. Indie Chart and No. 22 on the U.S. Country Chart. Its single, "Texas Women, Tennessee Whiskey," is still garnering airplay, and it's a great party song and a solid representation of the kind of upbeat country hybrid sound—it features phat R&B horns—the Josh Abbott Band delivers. This show should be a hoot!

Over in Morro Bay, Numbskull and Good Medicine have booked Cubensis, the Grateful Dead music experience, into The Siren on Tuesday, Oct. 3 (7 p.m.; 21-and-older; $15 presale or $20 at the door). The group draws on all areas of the famed jam band's career, playing two sets of classic Deadhead favorites.

The show I'm most excited about is the Campfire Caravan with the Brothers Comatose, Mipso, and The Lil Smokies at BarrelHouse Brewing on Wednesday, Oct. 4 (6:30 p.m.; all ages; $20 presale or $25 at the door). This trio of Americana indie bands is taking the show on the road all over the country, creating an intimate evening of Americana, bluegrass, and country music.

"With each band quickly rising the ranks, Campfire Caravan is a nod to the musicians' early days playing music, when they'd perform for friends and family in basements, living rooms, and around campfires," according to press materials. Campfire Caravan celebrates the American tradition of gathering communities around music. In an untraditional format, all three bands rotate in the lineup with no single ensemble acting as the tour headliner. A completely different show will be presented in each city with spontaneous collaborations amongst the groups taking place between sets."

Café Musique's "sister group" Classinova is about to play what violinist Brynn Albanese is calling their first "real show" this Saturday, Sept. 30, at Steynberg Gallery, with Santa Cruz singer-songwriter Michael Gaither (8 p.m.; all ages; $15 presale at 547-0278 or $20 at the door).

Gaither is releasing Hey Karma, his fifth CD of original material. The former journalist did a stint as a comedy writer, penning jokes for Jay Leno, "back when Jay Leno was still funny." Should be fun! Also at Steynberg Gallery, check out France's acoustic guitar master Pierre Bensusan on Friday, Sept. 29 (8 p.m.; all ages; $23 at 547-0278). Bensusan is a legend who plays with the instrument's harmonic colors in a wholly unique and thoroughly brilliant way.

Don't forget The Shins play this Thursday, Sept. 28 (8 p.m.; all ages; $29 to $39.50 at vinaroblesamphitheatre.com), with special guest Day Wave, at the Vina Robles Amphitheatre. They're touring in support of their critically acclaimed fifth album, Heartworms. 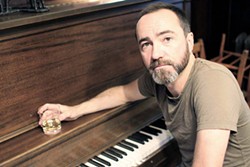 Airmen of Note, the U.S. Air Force's premiere jazz act, presents a free concert this Friday, Sept. 29 (7:30 p.m.; free tickets at pacslo.org/online/article/airmenofnotepac), in the Performing Arts Center. This is a rare appearance by the USAF Airmen of Note—their first California performance in a decade!

The Jazz After Dark series continues this week with the Gipsy All-Stars on Friday, Sept. 29, upstairs at Thomas Hill Organics on Monterey Street. (7 p.m.; all ages; free). Get your dose of Gypsy jazz. 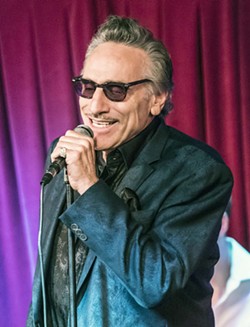 The Monroe plays Friday, Sept. 29, at The Pour House (8:30 to 11:30 p.m.), and in addition to their indie soul and rock sounds, you'll witness projection art! "I don't know if you've made it up to the new venue room they put up but it's a killer little showcase room with great sound treatment," Monroe utility man Dr. Isapony said.

Get your dirty blues on when Rick Estrin and The Nightcats play Saturday, Sept. 30, at Gio's on the Bay in Morro Bay (4:30 p.m.; $15 general admission, 459-6939 or fallfest.info). Their newest album, Groovin' in Greaseland, highlights Estrin's sly vocals and stunning harmonica playing set against a backdrop of tightly played blues and gritty roadhouse rock. 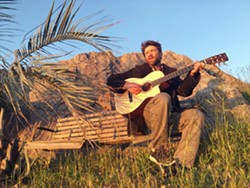 The waters off Baywood Park will light up this Saturday, Sept. 30, for the inaugural Baywood Lighted Boat Parade, a free, family-friendly event at the Baywood Pier and surrounding waters from 6 to 9 p.m. The Shane Stoneman Band plays the pier, dozens of small boats are expected to participate, 30 local artists will display their work, singer-songwriter Emily Frankin will also perform, and food and drink from the Blue Heron Restaurant will be available for purchase.