Bingeable: A Series of Unfortunate Events

If you’re looking for a series about three siblings overcoming adversity, resulting in a happy ending, then Lemony Snicket’s A Series of Unfortunate Events is not for you. I suggest you watch something else instead, maybe Fuller House?

But if you like to watch a show where twists, turns, and untimely deaths constantly change the fate of three children who’s current life situation seems very unfortunate, then this Netflix original series is just for you.

The series adaptation of the 13-book series by Daniel Handler—who goes by the pen name Lemony Snicket—tells the tale of the Baudelaire siblings Violet (Malina Weissman), Klaus (Louis Hynes), and Sunny (Presley Smith) who find themselves under the care of a very distant grotesque “uncle” after losing their parents in a mysterious fire. 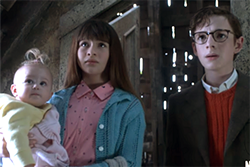 Their new guardian, Count Olaf (Neil Patrick Harris), is a self-proclaimed renowned theater actor and eager to have the Baudelaire children in his grasp—or more specifically, the fortune left behind by their late parents. His only obstacle is getting the fortune, as it can’t be obtained until the eldest Baudelaire (Violet) comes of age.

Throughout the series, the children are put into the care of other eccentric guardians who are genuine about their safety. But Count Olaf is constantly going after them in ridiculous disguises and the children defy the odds, nearly escaping his grasp each time.

The series is subtlety narrated by Lemony Snicket (Patrick Warburton) who finds it his duty to tell the factual tale of the children, while often warning the audience of the unfortunate fate lying ahead.

The first two episodes built the foundation of the characters and set the scene of the story, but it was slow to watch. What it succeeded in doing was not revealing too much information about the Baudelaire parents and the secret society they belonged to. Two episodes equate to one book in the series, which really does the novels justice, versus the 2004 film adaptation in which three books—The Bad Beginning, The Reptile Room, and The Wide Window—were crammed into a total of one hour and 48 minutes.

What really grabbed my attention when I read the books years ago were the constant mystery about who the Baudelaire parents were and the cliffhanger scenarios the children always found themselves in. The same mystery is sprinkled throughout the eight episodes, and when it seems like the Baudelaire children are going to have some answers, something unfortunate tends to happen.

The tone of the series is light-hearted in contrast to a rather dark tale of orphaned children with nothing to hold on to but each other and the hope of solving the mystery of their parents. The dialogue is filled with playful banter and light comedy that’s entertaining for younger and older viewers. I’m anticipating what unfortunate situations the Baudelaires will find themselves in if Netflix picks up a second season. (Eight  45-minute episodes.)