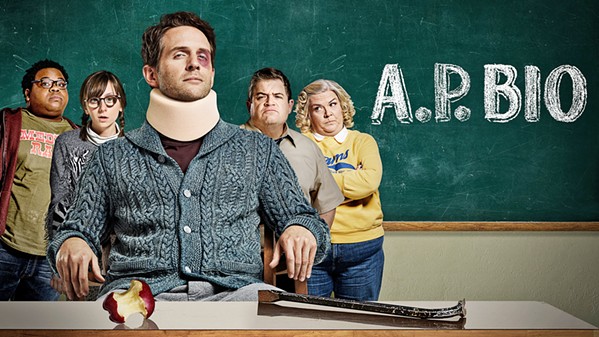 When Jack Griffin (Glenn Howerton) first walks into his classroom, chucks an apple against the wall, and proceeds to tell his students to "start to shut up" within the first few minutes of A.P. Bio, I thought for a moment that I was watching an episode of It's Always Sunny in Philadelphia. For those unfamiliar with the latter, Howerton plays the possible serial killer and definite creep, Dennis Reynolds, who spends all of his time drinking in a bar he owns with his friends and constantly ruining other people's lives. This isn't to say that the shows themselves are similar, but it's more of a testament to how well Howerton portrays arrogant, narcissistic jackasses who leave viewers conflicted about whether to root for or against them.

In A.P. Bio, Howerton plays a disgraced Harvard philosophy professor who loses his job and subsequently moves into his dead mom's house in Toledo, Ohio. There, he begins teaching advanced placement biology at Whitlock High School, which Griffin feels is way beneath him and doesn't hesitate to let everybody know. And no, the show never explains how or why a high school would hire a former professor with no science background for this job, other than the implied prestige associated with Harvard.

In most episodes, Griffin enlists his students in random schemes to help him take down his far more successful academic rival or write a revolutionary philosophy book, while refusing to let his students crack open their biology textbooks.

To be honest, I had a hard time getting into the show at first. The plot was a bit unoriginal and never super engaging. However, the strong cast kept me hooked. Seriously, everybody in this show is capable of delivering punchlines, including Griffin's awkward students; Principal Ralph Durbin (Patton Oswalt), who desperately wants to be Griffin's friend; and Principal Durbin's secretary, Helen Demarcus (Paula Pell), who is impossibly upbeat and enthusiastic about Whitlock High School. Additionally, history teacher Stef Duncan (Lyric Lewis), art teacher Mary Wagner (Mary Sohn), and home economics teacher Michelle Jones (Jean Villepique) are always hilarious and constantly delivering killer rebuttals to Griffin's arrogant and condescending remarks.

Aside from the strong cast, the writing itself seemed to get better in the show's second season—or I adjusted my expectations accordingly. Besides, the plot isn't really the point of the show. It's just a device to generate laughs, which is not a bad thing if the jokes land, and most of the time they do. However, an improved second season didn't translate to higher ratings, so NBC canceled the show.

The only upside to this cancellation is that maybe Howerton can now return to It's Always Sunny full time, where he will no doubt continue to play a sociopath with delusions of grandeur, constantly plotting the demise of his enemies. Only in It's Always Sunny the plotting will take place in a bar and not a classroom, which is probably more appropriate. Δ