More than 25 years after the last entry in the seminal cult-classic horror/comedy series, we’ve been blessed with the revival of Sam Rami’s Evil Dead franchise.

It’s a long time for fans to wait, but the newest entry, the Starz television series, Ash vs Evil Dead, is well worth the wait.

Rami’s three films in the series (Evil Dead, Evil Dead 2, and Army of Darkness) are a beloved gem of cult horror fans, known for combined bizarre special effects, over-the-top gore, and broad physical humor. They follow the story of wisecracking everyman Ash Williams (Bruce Campbell), who had the bad luck to come across a sinister book called the Necronomicon. Bound in human flesh, and inked in blood, the book has the power to awaken an old and ancient evil, which possesses human beings and turns them into murderous undead ghouls called deadites. 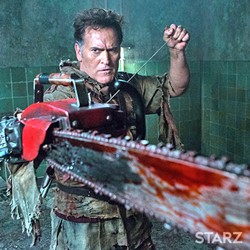 The films follow Ash bumbling his way though battling the forces of evil with his trusty “boomstick” of a shotgun and a chainsaw attached to one of his hands.

The television show, which just finished up its second season, picks up 25 years after Ash’s last battle with the deadites. Now pudgy, past his prime, and living in a trailer park, Ash spends his time picking up older women in dive bars, until one night, in an attempt to impress a potential one-night-stand, he reads from the Necronomicon and once again unleashes its demonic forces upon the world. Called out of retirement, Ash is joined by two millennial coworkers from the Walmart-style superstore where he works on a mission to, once again, defeat the growing plague of deadite that he, once again, stupidly unleashed on the world.

Like the movies, the show’s tone is a mix of blood-soaked horror and lowbrow humor that was the trademark of Rami’s franchise. If you get queasy at the sight of blood, you may want to skip this show. Deadite deaths are gory with a capital “G.” Face in a commercial deli meat slicer? Check. Decapitation by ceiling fan? Check. Impalement by a pair of ice skates? Also, check. If you are new to the series, just imagine the three stooges if they were directed by Charles Manson, and you’ll have a pretty good idea of what the show is all about.

As usual, Campbell is the linchpin of the show, bringing out both the humor and pathos of an older Ash, a loveable jerk whose trademark braggadocio and swagger take on a “high school football star past his prime” vibe in the television series. The two younger actors, who essentially play the “straight men” to Campbell’s bumbling Ash, do a good job grounding the show and keeping its ridiculousness in check, which is a tall order for a show that can get pretty outlandish. They also operate as great stand-ins for viewers who are unfamiliar with the films.

The best thing about the show, however, is that you don’t need to be a superfan of the original movies to watch it. Sure, the callbacks, nods, and references are awesome Easter eggs for devoted Evil Dead fans, but the show and story are self-contained enough to suck you in and stand on their own. With the last Evil Dead movie being released in 1992, if nothing else, the show will introduce a new generation to the blood-spattered hilarity of the Rami cult franchise. (20, 30-minute episodes.)