If you're a Saturday Night Live fan of any kind—like, even if you just stumble upon a sketch on social media once every few months—you probably know who Bill Hader is. 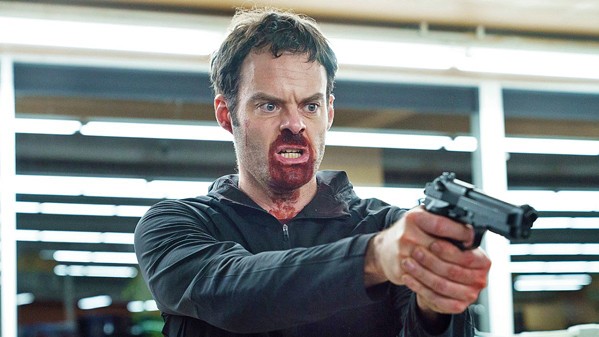 He's the brain behind unforgettable, larger-than-life character Stefon, a flamboyant New Yorker and frequent guest at the Weekend Update desk, where he gives mind-bending, coked-out descriptions of what he currently considers to be "New York's hottest club." As an SNL cast member from 2005 to 2013, Hader became famous for other similar characters and his incredibly accurate impressions, and throughout that time, he also appeared in quirky box office hits like Superbad (2007), Hot Rod (2007), and Tropic Thunder (2008).

Now, long after his days performing at 30 Rock, Hader is gaining a different kind of notoriety for his new show: Barry.

In Barry, which Hader co-created, writes, directs, and stars in, Hader plays—you guessed it—Barry, a depressed war veteran turned hitman who, despite a knack for efficient killing, is grappling with the meaninglessness of his life and all the pain he's caused.

When he's sent by a mobster to kill an actor wannabe in Los Angeles, Barry follows the mark to an acting class, where he finds himself intoxicated by the thrilling and often emotional structure of the class, and its group of hopeful and cheery students. Barry instantly falls for an especially devoted student, Sally (Sarah Goldberg), and the feeling of finally fitting in somewhere, so he trades in his gun for a script.

But as we all know (thanks to mandatory elementary school theater productions), acting isn't all that easy, and (thanks to Hollywood's obsession with violence) we also know you can't just suddenly leave a life of crime behind. Naturally, Barry faces a number of obstacles both on the stage and in burying his secret life.

Yet the show isn't at all what you'd expect, in terms of its actors' performances, plot, or character development. Every episode brings something completely fresh to the table, and the show, which is in the midst of airing its second season, only gets more difficult to pin down with each passing week.

Hader is especially unpredictable in Barry, almost entirely setting aside his typical ridiculousness, leaving space to showcase his character's inner turmoil. And unlike his character, Hader has talent.

There's a reason this show's first season was critically acclaimed, why it racked up wins at the 2018 Emmy Awards, and has a 99 percent rating on Rotten Tomatoes: It's fantastic. Δ